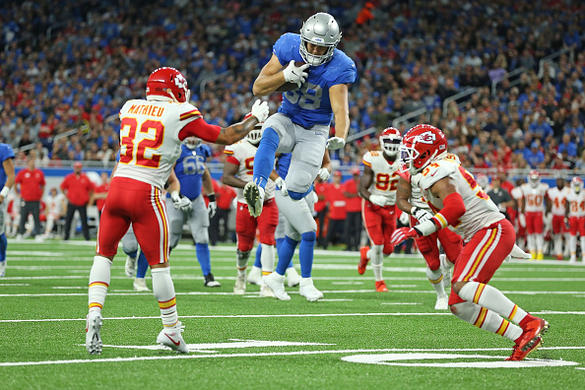 It was another painful week in the NFL and fantasy football leagues as more key players went down with injuries.  Quarterbacks seem to be getting injured at an alarming rate, so utilizing the waiver wire for backups is more important than ever.  This past week also started the byes so that means even more players will be inactive. GMs need to be aggressive in accumulating roster depth to accommodate for both injuries and byes.  So without any further ado, let’s take a look at some of the walking wounded in the fantasy football emergency room.

It is now known that Cam Newton is dealing with a Lisfranc injury and will likely miss the next several weeks.  Surgery does not appear to be an option right now, so a reasonable time from for his recovery is between four to eight weeks.  He has already missed the past few games so it is reasonable to expect he will be out at least through Carolina’s bye in Week 7.  This is devastating news for fantasy GMs who were hoping to have Newton back sooner than that. The Panthers will certainly be cautious with their franchise quarterback, but that could mean an even longer absence if the team does not play well or if Newton is not recovering at a fast enough pace.  Either way, Kyle Allen will be under center for at least a few more games and possibly more.

Packers wide receiver Davante Adams was in the midst of an enormous game last Thursday against the Eagles before leaving with a toe injury.  He underwent an MRI that did not reveal any structural damage. However, he did not practice on Monday and his status for Week 5 is questionable at this point.  Green Bay has a tough matchup against Dallas this week, so it would be a big loss for the team if Adams cannot play. Fantasy GMs need to be prepared to be without him this week as Marquez Valdes-Scantling and Geronimo Allison will see a big uptick in targets if Adams is unable to play.  Adams will have a couple extra days to rest and recover since the team played last Thursday, so monitor his progress throughout the week.

Mack exploded in Week 1 for 174 yards and a touchdown but he has only accumulated 164 yards over the past three games.  He has dealt with an ankle injury for the past couple weeks that has not prevented him from playing, but it appears to be a factor in his performance.  He left the game this past weekend in the fourth quarter and never returned. The Colts indicated that was simply because they were using Nyheim Hines in their no-huddle offense, but it is still concerning that they would not have their primary running back on the field as they attempted to make a comeback.  He is expected to play this week against Kansas City so GMs should not be concerned about his game status. The question is whether he will be able to sustain the workload and finish the game. This should be an appetizing matchup for Mack because the Chiefs defense has been porous for most of the season.

The Browns offense has finally started gelling after dismantling Baltimore’s defense this past weekend.  Jarvis Landry had a huge game catching eight passes for a career-high 167 yards before leaving the game in the second half with a concussion.  He is in the league’s concussion protocol this week so his status for next Monday night against San Francisco is unknown at this time. This would be a big loss for Baker Mayfield and the Browns, as Landry provided stellar production while Odell Beckham , Jr. was tied up with the opposing team’s best cover cornerback.  The Browns are already without David Njoku so losing Landry would be a big loss for the matchup against the undefeated 49ers. Landry is a solid WR2 option despite not having any touchdowns, but GMs need to monitor his status throughout the week.

We can add Mitchell Trubisky to the growing list of injured quarterbacks as he was taken out of this past Sunday’s game with a dislocated left shoulder.  He underwent an MRI that revealed a slight labrum tear, as well. The Bears do not believe he will need surgery and they do expect him back within a couple weeks.  Chicago will be playing in London this coming week and they have a bye after that in Week 6. It seems logical that they will bench Trubisky for the London game and give him a couple weeks of rest and rehab in the hopes he can return for Week 7.  Chase Daniel will get the start against the Raiders this week which makes him a possible consideration for a streaming start if you need a second quarterback due to injury or bye this week.

The Lions have been one of the most surprising teams in the league thus far and almost pulled off a huge upset against the Chiefs this past week.  Unfortunately, they not only lost at the end of the game but they also lost their stud rookie tight end T.J. Hockenson . He suffered a concussion and shoulder injury when he tried hurdling over defenders and landed sideways on his head and shoulder.  The Lions are not placing him on injured reserve, but there is no time frame for when he might be back. Hockenson had a huge Week 1 and then disappeared for a couple weeks before re-emerging against the Chiefs. He has caught 11 passes for 166 yards and two touchdowns through the first four games, but now he will cede playing time to Logan Thomas and Jesse James who will split duties at tight end.

Bengals wide receiver John Ross sustained a shoulder injury during the second half of Monday night’s loss to Pittsburgh.  He appeared to be in a lot of pain as he had his arm dangling by his side before being removed from the game. Cincinnati is obviously already very thin at wide receiver with A.J. Green still out, so this would be a big loss for the Bengals.  Ross got off to an incredible start to the season but has cooled off a bit these past couple weeks. He has caught 16 passes for 328 yards and three touchdowns through the first four games but could miss some time depending on how severe the injury is to his arm.

Rookie wide receiver Terry McLaurin has been one of the only bright spots for the Redskins thus far with 16 catches for 257 yards and three touchdowns.  Unfortunately, he sustained a pulled hamstring last week and was forced to miss Week 4 against the Giants. This was a mouth-watering matchup on paper because the Giants defense has been abysmal for most of the season and McLaurin could have taken advantage of that.  However, Case Keenum was atrocious and was benched in favor of rookie Dwayne Haskins, Jr. This changing of the guard should be interesting to see how rookies Haskins and McLaurin gel when they are both on the field.

The Bills magical start to the season was given a huge reality check when they went up against the Patriots and their stellar defense.  Josh Allen was no match for Bill Belicheck as he was overmatched completing less than 50% of his passes for only 153 yards and three interceptions.  To add injury to insult, he sustained a brutal helmet-to-helmet hit on a tackle and was removed from the game with a concussion. He will be in the concussion protocol this week so his status for Week 5 is up in the air at this point.  Matt Barkley would get the start for the Bills against Tennessee if Allen cannot go. Buffalo may want to give him an extended rest period since they have a bye in Week 6.

If not for the Dolphins, Redskins and Bengals, we would talking about how the Broncos are the worst team in the league.  They are now 0-4 and have lost second-year linebacker Bradley Chubb for the season with a torn ACL. Incredibly, he ended up coming back into Sunday’s game and played through the injury.  Chubb had a stellar rookie season last year and was on pace to follow that up as he had 21 tackles along with one sack and one forced fumble. He can be dropped in all redraft IDP leagues.

J. Doctson - WR
NYJ
Jets WR Josh Doctson has opted out of the 2020 NFL season.
Doctson was among a handful of players who opted out just before the 4 p.m. deadline. A former first round pick, Doctson would not have been a fantasy factor this season barring a rash of Gang Green wideout injuries. Doctson played in one game for the Vikings last year after three disappointing seasons in Washington.
Added Yesterday 4:34 pm (EST)
Added Yesterday 4:34 pm (EST)

M. Crosby - DL
LV
Raiders placed DE Maxx Crosby on the reserve/COVID-19 list.
It's unclear if Crosby has coronavirus or has merely come into contact with someone who does. The No. 106 overall pick of last year's draft, Crosby had a sensational rookie year, registering 10 sacks and four forced fumbles. He still has over a month to get conditioned for Week 1.
Added Yesterday 4:27 pm (EST)
Added Yesterday 4:27 pm (EST)

K. Vaughn - RB
TB1
Bucs activated RB Ke'Shawn Vaughn from the reserve/COVID-19 list.
RB Raymond Calais and RB Aca'Cedric Ware also came off the team's COVID-19 list. Vaughn returns to action a day after Bucs HC Bruce Arians said RB Ronald Jones would be the "main guy" in the Tampa backfield. Vaughn's ADP has dipped into the eighth round of 12-team leagues. With a further ADP drop, the rookie is shaping up as a solid stash in redraft leagues, especially for those who don't put much stock in Arians' backfield proclamations.
Added Yesterday 4:21 pm (EST)
Added Yesterday 4:21 pm (EST)