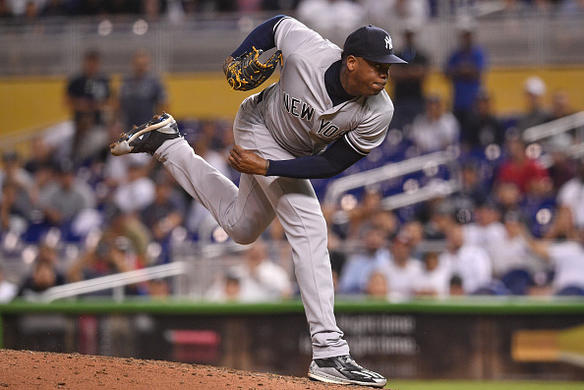 We have reached that point in the season where the injuries seem to really pile up and MLB teams tend to be overly cautious and conservative when it comes to shutting players down.  This edition of the injury report contains players at both ends of the spectrum in that some teams keep players out to save them for the postseason while other teams shut players down when they have nothing to play for in a lost season.  Either way, these decisions can wreak havoc on fantasy rosters so you need to be prepared for any and all possibilities.  So, without further ado, here is the next edition of the fantasy baseball emergency room. 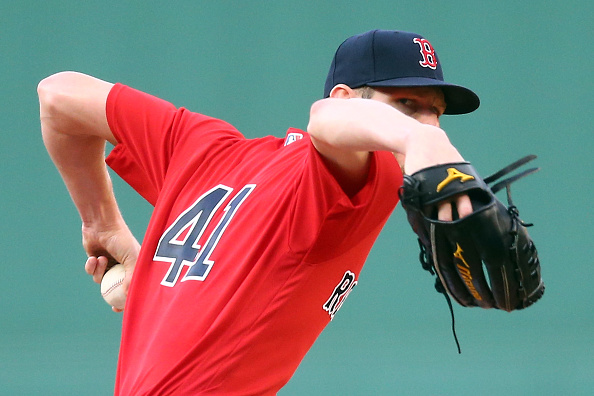 Sale has been on the disabled twice in the past few weeks with a shoulder injury which is catastrophic for fantasy GMs trying to make a push for the playoffs.  With the Red Sox enjoying a comfortable lead in the AL East, it is unlikely that they will be in a rush to bring him back.  Sale is eligible to be activated off the disabled list this weekend, but he has not started throwing yet so do not expect to see him back just yet.  Unfortunately it looks like GMs will have to go at least another week without their ace pitcher who has been nothing short of dominant all season.

The Yankees have been bitten by the injury bug of late and the latest victim is closer Aroldis Chapman .  His left knee has been an issue for a while now and it flared up again against the Marlins earlier this week.  As a result, the Yankees placed him on the disabled list with tendinitis and will now have some time to rest and recover.  The Yankees have a deep bullpen with several options to close games including David Robertson , Dellin Betances and Zach Britton .

Springer has missed the past few games with a quadriceps injury and is hoping to return to the lineup on Friday.  He spent some time on the disabled list recently with a thumb injury, so this is a new issue.  It’s nothing that should cause any concern for GMs long-term, but Springer is a productive fantasy player and his presence in the lineup is critical at this juncture of the season.  Check back later to see if he is in Houston’s lineup tonight.

Upton has been placed on the disabled list with a laceration to his left index finger.  He apparently sliced his finger on a wine glass last weekend which required some stitches to close the wound.  Upton will likely need more than the minimum ten days so we do not know how long he might be out.  He has been a valuable OF2 or OF3 batting .267 with 26 home runs, 74 RBI, 69 runs scored and seven stolen bases.  The Angels recalled Jabari Blash who could see some playing time with both Upton and Mike Trout out of action.

The Yankees suffered another key injury when Didi Gregorius collided with Kendrys Morales last weekend and suffered a contusion on his left heel.  He will need some extra time to recover so the Yankees placed him on the disabled list retroactive to August 20.  He was batting .270 with 22 home runs, 74 RBI, 76 runs scored and ten stolen bases so his absence will be felt by fantasy GMs.  Look for Gleyber Torres to slide over to shortstop and then see a platoon of Neil Walker and Ronald Torreyes at second base. 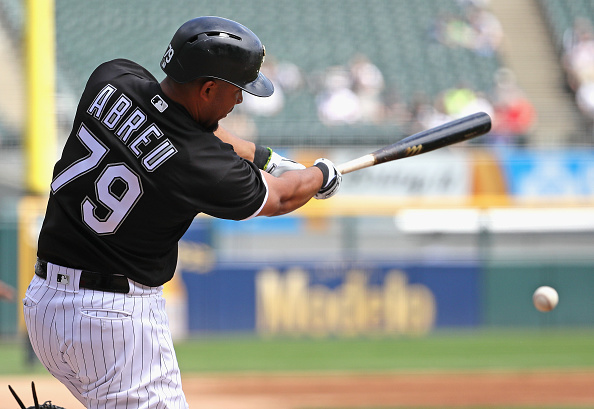 It is possible that José Abreu could be done for the season after undergoing abdominal surgery earlier this week.  He has been dealing with abdominal pain and it required an operation which will keep him from resuming baseball activities for a few weeks.  It is possible he could come back at some point in September, but with the White Sox going nowhere they may opt to just shut down their star player and avoid any risk of additional injuries.  Keep him stashed for now because he will provide value if he does manage to return before the end of the season.

The Mariners took Jean Segura out of Wednesday’s game against Houston because of some soreness in his rib cage.  He has apparently been dealing with this issue for an extended period of time but Seattle opted to be proactive with once he tweaked the injury on Wednesday.  The Mariners are fighting for their playoff lives so they will need Segura back in the lineup as soon as possible.  He has been a very valuable fantasy asset batting .315 with nine home runs, 57 RBI, 78 runs scored and 17 stolen bases.  Right now he is considered day-to-day so be sure to follow up for additional updates before tonight’s game.

Things have not gone well for Archer since he was traded to Pittsburgh at the deadline as he has an ugly 4.91 ERA and 1.64 WHIP in four starts.  He also was taken out of his last start earlier this week with some discomfort in his left leg.  The Pirates have him listed as probable to make his next scheduled start this weekend against Milwaukee assuming he does not have any setbacks in between.  Plan on having him in your lineup but be sure to check back again over the weekend to confirm whether he will take the mound.

Fantasy GMs can now be put out of their misery as Darvish will officially miss the rest of the season with both elbow and triceps injuries.  His first season with the Cubs was an unmitigated disaster as he finishes with a 1-3 record with a 4.95 ERA in only eight starts.  The Cubs do not seem to think Darvish will need surgery, so the hope is that having several months off will heal his injuries and that he will be 100% ready for 2019.

Ozuna has been placed on the disabled list with inflammation in his right shoulder.  This has been a recurring problem for him and it reached the point where he needed some extended time off.  The timing is unfortunate for the Cardinals who have been surging and appear headed for a playoff berth that seemed unattainable earlier this summer.  Ozuna has regressed quite a bit this year, possibly due to the shoulder injury.  Look for Tyler O’Neill to see regular playing time in Ozuna’s absence with Matt Adams also getting some at bats now that he has been reacquired by St. Louis. 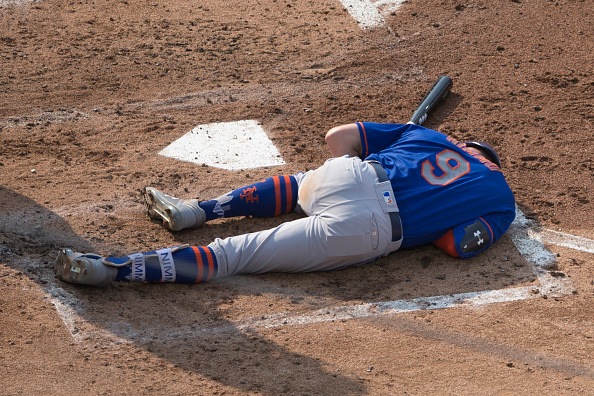 The Mets placed Brandon Nimmo on the disabled list with a bruised left index finger.  He sustained the injury when he was hit in the hand by a pitch last weekend.  The initial thought was that he wouldn’t miss much time since the x-rays came back negative, but sure enough the Mets changed course with their handling of an injury and shut him down.  Nimmo has proven to be a viable fantasy option in deep leagues batting .265 with 15 home runs, 39 RBI, 65 runs scored and eight stolen bases.  He will see regular playing for the remainder of the season once he is activated.

Ramos suffered a wrist injury against the Mets last Sunday and subsequently missed a couple games this week.  He is hoping to be back in the lineup on Friday against Toronto so you will need to check back in later for an update.  Ramos is one of the better offensive catching options as he is batting .303 with 14 home runs, 57 RBI and 33 runs scored.

Moreland left Thursday’s game against Cleveland with a left knee contusion he suffered after sliding into a railing while he was attempting to catch a foul ball.  He attempted to stick it out after the collision and even collected a hit before the Red Sox pulled him.  Moreland should be considered day-to-day and will probably be given some time off to heal.  He is batting .259 with 15 home runs, 66 RBI, 53 runs scored and two stolen bases making him a viable corner infield or utility option in deeper leagues. 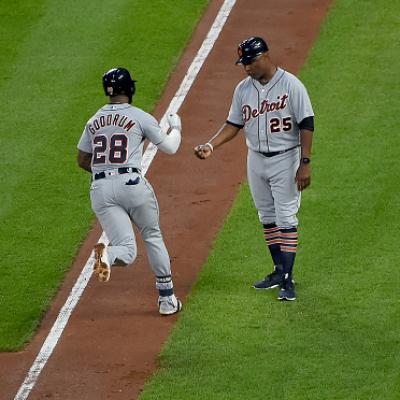 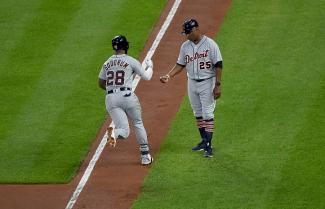 MLB Bumgarner removed from start due to back spasms

Y. Alvarez - LF
HOU
Yordan Alvarez (undisclosed) got six plate appearances in an intrasquad game Sunday and recorded a home run, a single, and three walks.
Alvarez is now 4-for-6 with two doubles, a homer, and four walks over the last two days at the Astros' alternate training site in Corpus Christi, Texas. There is no public timetable for his 2020 regular season debut, but it should be coming relatively soon -- probably sometime this week. The young slugger was placed on the injured list just before Opening Day after missing all of summer camp for undisclosed reasons.
Added 9:22 pm (EST)
Added 9:22 pm (EST)

L. Perdomo - RP
SD
Luis Perdomo will start for the Padres on Tuesday against the Dodgers.
There was some thought that Luis Patino might get that nod, but he was used in relief Sunday afternoon against the Diamondbacks. Perdomo has worked primarily in relief for San Diego over the last two years and owns a 5.40 ERA through three appearances this season. He's not a good fantasy bet versus Los Angeles.
Added 8:54 pm (EST)
Added 8:54 pm (EST)

B. Raley - RP
CIN
Astros acquired LHP Brooks Raley from the Reds for a player to be named later.
Raley was designated for assignment by the Reds on Thursday after allowing four runs on five hits and two walks through his first four innings of relief in 2020. The 32-year-old owns a career 7.23 ERA in the majors.
Added 8:37 pm (EST)
Added 8:37 pm (EST)

L. Thomas - CF
STL
Lane Thomas has tested positive for COVID-19, the Cardinals announced Sunday.
That brings the total number of positive cases on the Cardinals to 17 -- seven staff members and 10 players. This week's three-game series between St. Louis and Pittsburgh has already been postponed, and it's unclear whether the Cardinals will be allowed to travel to Detroit for a scheduled doubleheader on Thursday. They haven't played a game since falling to the Twins in Minnesota back on July 29.
Added 8:31 pm (EST)
Added 8:31 pm (EST)

D. Moore - LF
SEA1
Dylan Moore smacked his third home run of the season on Sunday as the Mariners dispatched of the Rockies 5-3.
Moore gave the Mariners an early lead as he smashed a two-run homer off of German Marquez just two batters into the ballgame. He also drew a walk in the contest, finishing the afternoon 1-for-3. Moore is off to a nice start for the Mariners this season, slashing a healthy .293/.326/.610 with three homers, six RBI and three swipes.
Added 7:55 pm (EST)
Added 7:55 pm (EST)

K. Lewis - CF
SEA1
Kyle Lewis went 1-for-3 with a walk and a run scored in Sunday's victory over the Rockies.
Lewis started the Mariners' three-run rally in the seventh with a leadoff infield single. He would later come around to score on Evan White's sacrifice fly. The 25-year-old has a lot of swing and miss to his game, but so far the good has far more than outweighed the bad as he's slashing .355/.420/.516 with three homers, 11 runs scored, 10 RBI and a stolen base. He should be a fixture in the middle of the Mariners' lineup for the foreseeable future.
Added 7:51 pm (EST)
Added 7:51 pm (EST)