The Fantasy Alarm NHL Draft Guide breaks down the top 20 defensemen for the 2016-17 fantasy hockey season. 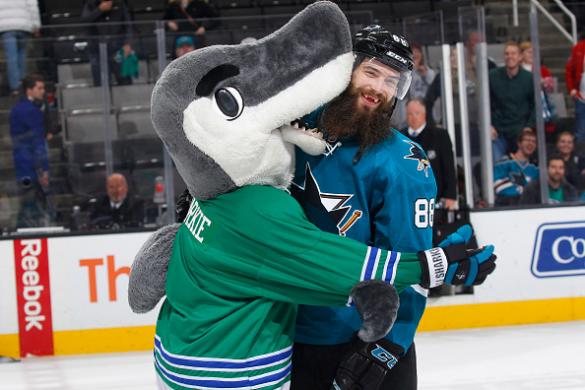 The defense position used to be separated in half: most NHL teams had offensive and defensive defensemen. More often than not, teams would pair an offensive type with a more stay-at-home defender. Nowadays, with the NHL becoming a harder league to score goals with each passing season, MOST defensemen are asked to contribute on offense (while maintaining a standard of competency in the defensive zone). That said, the NHL's top two blueliners--Ottawa's Erik Karlsson and San Jose's Brent Burns--played alongside veteran defensive types in Marc Methot and Paul Martin last season. Methot is now with Dallas, where he could pair with Karlsson clone John Klingberg. Here are the 20 best fantasy defensemen heading into the 2017-18 campaign:

The slick Swede needs a new partner in '17-18 (likely Fredrik Claesson or Johnny Oduya, both countrymen).

For much of '16-17, Burns was arguably the best player in the NHL. His ability to get shots to the net is uncanny.

With plenty of veterans gone from last season's squad, 'OEL' will take on a bigger leadership role in 2017-18.

In Year 2 with the Predators, expect Subban to kick it up a notch in terms of his freewheeling offensive style.

The former Predators rearguard is poised to break out this season. He is a complete defenseman in every way.

The Swiss blueliner is among the most mobile defenders in the league but his brain is catching up to his wheels.

Big Hedman was (arguably) the most complete defenseman in the NHL last season. He can do it all on the ice.

Few defensemen are as good as Doughty in all aspects of the game. His offense should spike up this season.

The Bruins' power-play quarterback has carved out a solid partnership with stay-at-home type Adam McQuaid.

He will likely be paired with Marc Methot this season, so Dallas is hoping for an Erik Karlsson-like performance.

Carolina boasts great young blueline talent but Faulk remains their offensive leader. He might bust out in '17-18.

Speaking of busting out, Leddy is a candidate to enjoy a career year in '17-18. His supporting cast is improving.

The Sabres will not hesitate to feed the Finnish rearguard loads of ice time. His overall game is developing well.

If he could stay healthy, Letang would leapfrog over most players on this list. Alas, he always seems to be hurt.

He really turned it on last season and is now entrenched as one of Calgary's top all-around blueliners.

While Colorado could struggle again this season, Barrie should still accumulate his fair share of assists.

Winnipeg is witnessing a changing of the guard, as Trouba is on the verge of becoming a true No. 1 defender.

While he is always a good pick, his value goes up to start '17-18 due to the S. Vatanen and H. Lindholm injuries.

It was a harder sophomore campaign for Gostisbehere in '16-17, but he will always be able to produce points.

A. Cirelli - F
TB
Anthony Cirelli's agent, Pat Morris, said there's "nothing new to report" when he was asked how contract negotiations are going with the Tampa Bay Lightning.
It doesn't sound like there has been much progress in that regard between the two sides, but that could change after the Lightning announced the signing of Mikhail Sergachev to a three-year contract on Wednesday. Cirelli and Erik Cernak, who are important restricted free agents, still need to be re-signed by Tampa Bay.
Added 4:14 pm (EST)
Added 4:14 pm (EST)

J. DeBrusk - F
BOS
Jake DeBrusk is aiming to get stronger and create more "chaos around the net" during the 2020-21 season.
"Theres no reason I cant average a hit per game," said DeBrusk shortly after the Bruins announced that a two-year contract between the two sides had been reached. The 24-year-old forward will be looking to disrupt more plays in the hope of contributing more offensively. DeBrusk had 19 goals and 35 points in 65 games last season.
Added 4:09 pm (EST)
Added 4:09 pm (EST)

J. Boychuk - D
NYI
Johnny Boychuk's playing career has come to an end because of an eye injury.
Boychuk suffered the injury during the 2019-20 regular season, which was his second to the same eye. He was diagnosed with optic nerve damage. The 36-year-old defenseman had two goals, 11 points, 128 blocks and 135 hits in 64 games last campaign with the Islanders. Boychuk played in 725 career NHL regular-season contests. He still has another two seasons left on his contract that carries a $6 million cap hit and could end up on LTIR going into the 2020-21 campaign.
Added 12:36 pm (EST)
Added 12:36 pm (EST)

C. Bradley - F
DET
The Detroit Red Wings think they might have a steal in Chase Bradley.
Bradley wasn't taken until the 203rd pick of the 2020 NHL Entry Draft. Obviously players who go that late are projects at best and many of them don't make it to the NHL, but successful teams get value out of their late round picks. In the past, Detroit drafted Jonathan Ericsson, Henrik Zetterberg, Pavel Datsyuk, and Tomas Holmstrom in the sixth round or later. “For sure, you see some of those players who are drafted in the late round, and the impact they’ve had in the NHL, it’s crazy,” Bradley said in a Zoom media interview after the draft. “It didn’t affect them too much. Being drafted is one of the main things you strive for. It definitely doesn’t change my mindset on anything.” Those players were key pieces for the Red Wings, but in recent years Detroit hasn't had nearly as much success with their late round picks. The Red Wings are hoping to change that recent trend with Bradley though. They like his competitiveness and the steady rate that he's been developing. He's been playing in the USHL, but is set to go to Northeastern to continue his development in the NCAA.
Added 10:37 am (EST)
Added 10:37 am (EST)

P. Kane - F
CHI
Patrick Kane recounted a time when he was a kid and his coach, Darryl Belfry, benched him after scoring a goal to teach Kane a lesson that he took to heart.
Belfry had been trying to get the young Kane to utilize his teammates and had been warning him that if Kane continued to try to do everything by himself, there would be consequences. Finally, in a game where his team was up 5-1 but hadn't scored in a while, Kane decided to carry the puck, got around two opposites and scored. He returned to the bench, gloating, but as a result he spent the last period of the game sitting. "[Patrick] was like, 'After I'm scoring a goal, like, what's wrong with scoring?'" Belfry recalled. "And I said, 'It's not the fact that you scored, it's that this goal is not projectable. Yes, we're in a 5-1 game, we're better than this team, they probably long since given up, so yeah of course you can score there. But what happens when we play against really good teams and now they're trying to take your head off? This attitude and this play is just not going to work." Kane wrote about that moment in a foreword for Belfry's new book, “Belfry Hockey: Strategies to Teach the World’s Best Athletes,” and Kane credited it as helping him to focus on developing his vision and playmaking. It's a lesson that served him well in the NHL.
Added 8:28 am (EST)
Added 8:28 am (EST)

D. Vladar - G
BOS
Daniel Vladar has been loaned to HC Dynamo Pardubice by the Boston Bruins.
Vladar had a 1.79 GAA and .936 save percentage in 25 AHL games last season. He also made his NHL debut in a playoff game on Aug. 26. HC Dynamo Pardubice plays in the Czech Extraliga. With the AHL campaign not expected to start until February, this will allow Vladar to get in some work.
Added Yesterday 3:31 pm (EST)
Added Yesterday 3:31 pm (EST)