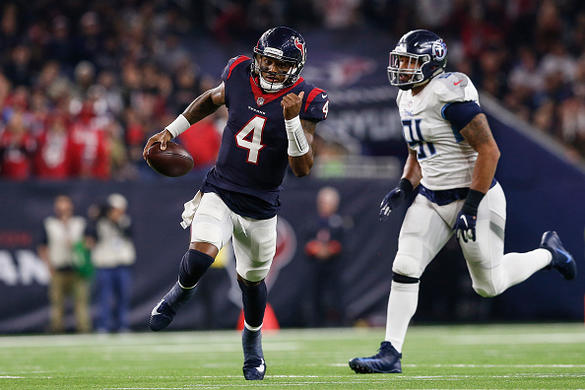 Hopefully, you’ve been playing SuperDraft along with us this season, because last week went well. Getting Aaron Rodgers at 1.3% ownership was huge, as was Courtland Sutton at 0.9%. I’m still surprised Jack Doyle was only 29.34% owned in one of my contests. I tend to value certain players more than most, which is why Mark Ingram makes this list most weeks, and while I try not to play those guys every single week, I don’t shy away from it, either. It’s nice to know I don’t have to chase differential plays because I will usually hit on a few players at low ownership without even trying. That could come in handy for this week’s cash lineup because at least a couple of my picks will likely be pretty chalky.

This multiplier does not make sense. The only quarterback on Sunday’s slate who is averaging more fantasy points than Watson is Lamar Jackson . I suppose this is a reaction to Denver’s defense, but I’m not afraid of the Broncos, especially if Von Miller cannot go. Watson is capable of having a stinker like he did at Baltimore three weeks ago, so I get it if he makes you nervous for cash, but I don’t know how you could pass him up.

Watson looks downright rock-solid compared to Brady. I went to bed late in the third quarter of the Sunday night game, when it looked like Brady would be held under 15 fantasy points for the fourth straight game. He obviously made his week in garbage time, and while I don’t want to count on that, it’s nice to know he at least has the potential to Bortles his way to fantasy points.

Speaking of someone with Bortles potential, Lock qualifies. He had 13.86 fantasy points despite only throwing for 134 yards, and if Deshaun Watson plays well, Lock might have to throw down the field more than he did in his NFL debut. With his multiplier, if he matches last week’s point total, he’d top 24 fantasy points, and I would be very happy with that.

Just in case you’re not happy with those other options, I think Dalton is the best of the bunch between Brady and Lock. Dalton is averaging 17.0 fantasy points, just short of Brady’s average, and he has at least 13 fantasy points in five straight games.

Ingram was held to just 7.20 fantasy points last week, against a historically good defense in the pouring rain. He had at least 22 fantasy points in each of his two games before that, and this is another multiplier that makes no sense.

If I knew he was healthy and would get his normal touches, Jacobs would be an easy cash play along with Ingram. If he is out, Richard and Washington become interesting plays with high multipliers.

I am a bit concerned that Jones’s only good game in November came against the Panthers, but it’s not like Washington’s defense is special. Jones has 14 touchdowns on the season, and he could easily get one or two more in this game.

Speaking of Freeman, have you seen how bad the Panthers are against the run? He had 21 touches last week, and if he gets 21 more in this game, he’ll probably have a huge week. 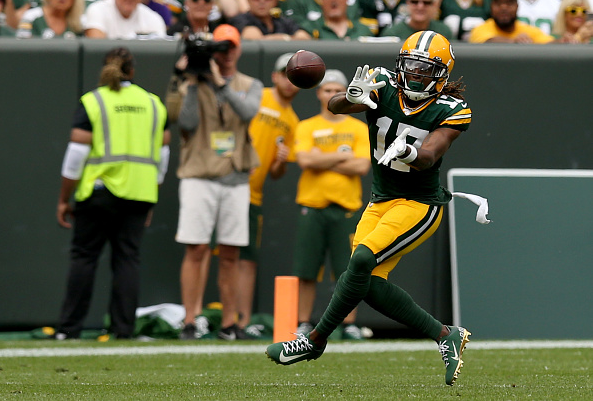 I’m really tempted to take DeAndre Hopkins instead, but the multiplier difference is negligible, and I’m slightly more concerned about Hopkins’s matchup.

I don’t know what happened to Allen in October, but he seems to be over it. He has at least 12.60 fantasy points in three straight games.

Boyd has at least nine fantasy points in four of his last five games, including each of his last two. His targets and (to a lesser extent) production should be safe with Andy Dalton throwing to him again.

I think we can throw out last week’s stats because they came in a monsoon. Brown wasn’t exactly consistent before that, but he is the deep threat in an explosive offense, and that has value.

I think it is at least possible the Panthers spread the ball around more now that Ron Rivera is gone. Even if that isn’t the case, Samuel has some upside in a good matchup.

Yes, I know it is obvious, and no, I don’t feel great about this call, even if every single tight end scores a touchdown against the Cardinals (except for Evan Engram ). McDonald has double-digit fantasy points in just two of his games this season, so if you’re using him, it’s entirely for the matchup.

Cook has at least 10 fantasy points in six consecutive games. The matchup is very tough, but the multiplier feels way too high.

This feels like going out on a limb, but Thomas wasn’t bad last season when Greg Olsen was out. He could get shut out, but it’s not like there are a bunch of super-safe tight ends I’m dying to play ahead of him.

I have Henry ranked ahead of Austin Hooper , Mark Andrews and Darren Waller this week, and that’s before we take the multiplier into account.

P. Barber - RB
WAS
ESPN's John Keim reports Washington believes RB Peyton Barber has "every-down ability."
Washington RB coach Randy Jordan also said, "He gives you thump just like Adrian Peterson does. He's a pro's pro." Barber played more than half of the Bucs' offensive snaps in 2018 when he handled 234 carries and 29 targets, but he has been a committee back in his other three seasons. This year, he'll compete with Adrian Peterson on early downs and Antonio Gibson on passing downs, with J.D. McKissic and Bryce Love also in the mix. It's a depth chart that is open for the taking following Derrius Guice's release, but it's hard to buy this report until we see how the team is splitting touches in actual training camp practices. Barber certainly is a wait-and-see fantasy asset in most leagues.
Added Yesterday 11:49 pm (EST)
Added Yesterday 11:49 pm (EST)

A. Peterson - RB
WAS1
Washington RB coach Randy Jordan believes the shortened offseason has helped Adrian Peterson "stay fresh."
Touches are up for grabs following Derrius Guice's release, and Peterson may get the first crack at them given his experience. Peterson figures to be the Week 1 starter and could hold onto his early-down role for much of the season. How valuable that role is for fantasy football, however, is a valid question. Peterson was barely a flex play last year despite seeing more than a dozen carries per game over certain stretches of the year. AP's ceiling is very low in this offense, but he may get in the way of the building Antonio Gibson hype. Expect to get some answers regarding the Washington depth chart in the back half of August training camp.
Added Yesterday 11:42 pm (EST)
Added Yesterday 11:42 pm (EST)

A. Gibson - RB
WAS
Washington RB coach Randy Jordan believes "it'll take time for Antonio Gibson to learn protections and to diagnose blitzes."
It's not a surprise to see Gibson's running back coach question if Gibson is ready for a full workload. Gibson only handled 77 touches throughout his Memphis career and split his time between running back and receiver. When Washington drafted Gibson, they likely planned on easing him in, but they may have to force the issue now that Derrius Guice is off the roster. Gibson is currently in meetings with both the running back and receiver groups as he learns how to run routes, read blocks, and work in pass protection. ESPN's John Keim believes the Memphis product is talented, but "in an odd offseason it could take time for him to grasp all that he needs to do in order to fully contribute." Gibson will battle Adrian Peterson, Peyton Barber, J.D. McKissic, and Bryce Love for playing time. He's a classic boom-bust mid-round pick.
Added Yesterday 11:24 pm (EST)
Added Yesterday 11:24 pm (EST)

B. Price - DL
JAC
Jaguars put DL Brian Price (knee) and DL Dontavius Russell (hip) on injured reserve.
Jacksonville's defensive depth has been wiped out over the past week after CB Rashaan Melvin, DE Lerentee McCray, and DT Al Woods opted out of the season. Meanwhile, franchise tagged DE Yannick Ngakoue is seeking a trade from Jacksonville and forgoing team activities. The team signed DT Caraun Reid and DB Tramaine Brock on Sunday. The Jaguars are shaping up as a defense for fantasy players to target this year.
Added Yesterday 8:03 pm (EST)
Added Yesterday 8:03 pm (EST)

D. Guice - RB
WAS
Free agent RB Derrius Guice cleared waivers.
Washington released Guice after he was arrested for domestic violence. Guice will face a lengthy suspension if a team is willing to take the PR hit and sign the running back. It's unlikely that he gets a second chance until his current charges are settled. Guice came into the league with off the field issues, so most teams will have zero interest.
Added Yesterday 5:52 pm (EST)
Added Yesterday 5:52 pm (EST)

J. Taylor - RB
IND1
The Athletic's Zak Keefer wrote, "Jonathan Taylor is expected to share carries with starter Marlon Mack."
Zeefer continues by writing, "don’t be surprised if the rookie has a few breakout games and Reich stays with him." It's the consensus projection for this backfield; Mack and Taylor will split carries initially, but Taylor can become the clear-cut starter if he lives up to his draft profile. For three years at Wisconsin, Taylor showed high-end rushing ability and proceeded to light up the NFL Combine with 4.39 speed. In a vacuum, Taylor is a higher ceiling player than Mack, who is in the final year of his rookie contract. By the second half of the 2020 season, it'd be surprising if Taylor wasn't seeing 15-plus touches weekly. Reaching for Taylor in redraft fantasy leagues is risky because Taylor may not secure passing-down work, but he's a fine pick late in the fourth round.
Added Yesterday 5:32 pm (EST)
Added Yesterday 5:32 pm (EST)

M. Ingram - RB
BAL
When asked about how he'll deploy his running backs, Ravens OC Greg Roman said "that’s going to happen on the fly every day in training camp."
The Ravens arguably have the deepest running back depth chart in the NFL with second-round rookie J.K. Dobbins added to a veteran group headlined by Mark Ingram and Gus Edwards. Roman said the team will "find ways to make it work, for sure. To have that kind of backfield is a blessing. We definitely want to get into training camp and work through it and kind of evolve as we go." With a condensed offseason, Ingram is the projected Week 1 starter and could hold onto that role well into the season if he continues running like he did last year when he averaged 5.0 yards per carry. Dobbins will put pressure on Ingram, however, particularly in the second half of 2020. The threat of a committee has suppressed Ingram and Dobbins' average draft positions in fantasy leagues, making them both worthwhile mid-round gambles. This offense should be among the league's best once again.
Added Yesterday 5:22 pm (EST)
Added Yesterday 5:22 pm (EST)