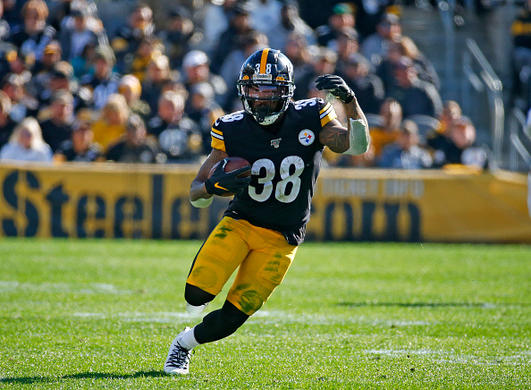 On the one hand, I probably shouldn't have trusted Adam Thielen for cash in his first game back. On the other hand, if he catches that pass before reinjuring himself, my lineup cashes. It was nice to see Zach Ertz and Melvin Gordon finally go off, and everyone contributed outside of Thielen. This week, I'll try to avoid anyone coming off an injury for cash, but I can’t make any promises. 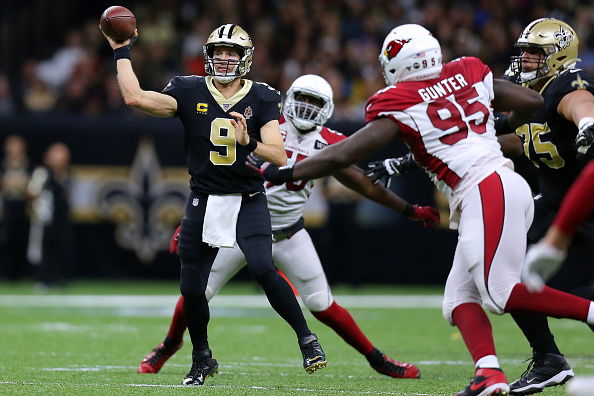 Brees put up 27.92 fantasy points against Arizona in Week 8, and his Week 10 match-up is just as favorable. Brees has the best multiplier of the quarterbacks I trust.

Ryan has a tougher match-up than Drew Brees , but he is averaging 5.2 more fantasy points per game, and he has a higher multiplier. Ryan’s ownership will likely be lower as well.

Finley is the best of the high-multiplier options. He has a lot of good weapons as well as a pretty favorable match-up. I don't trust him for cash games, but I wouldn't be shocked if he threw two or three touchdowns.

I’m not as concerned about Kareem Hunt ’s return or Buffalo’s run defense as some other people. Dontrell Hilliard played 26 snaps last week and Chubb still had 24 touches and 91 scrimmage yards. I can't see Hunt playing 26 snaps or Chubb getting fewer than 20 touches, at least for this week.

Ingram is probably safer than Chubb, mostly due to the match-up.

I’m not sure there’s much difference between Barkley and McCaffrey for fantasy this week, but there is a difference in their multipliers.

If I am abiding by the Adam Thielen rule, I cannot play David Johnson in a cash lineup. I might have to break my own rule. Among active running backs in this slate, Johnson is sixth in fantasy points, but 12 players have a lower multiplier. That value is hard to pass up.

Samuels is not nearly the player David Johnson is, but he is healthier and has a higher floor. He is the smart play for cash.

I don’t know if Dion Lewis ’ usage from last week is indicative of things to come, but he had nine touches last week, and he would likely get even more touches if Tennessee falls behind. This is obviously super risky, even with getting double points.

Like Lewis, I don’t really trust Williams’s workload from Week 9, but there is an awful lot of potential if we get a repeat workload. 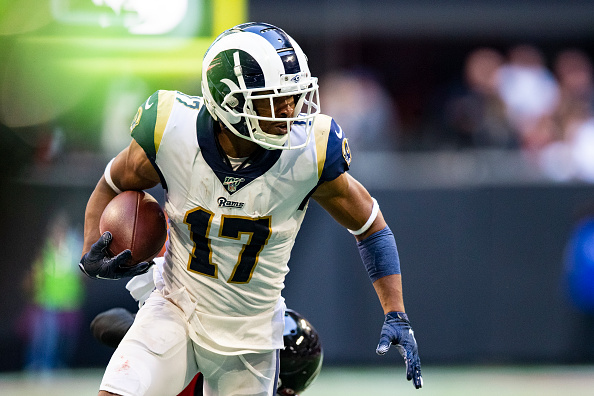 I’m tempted to choose Cooper Kupp instead, but I suspect Kupp’s ownership will be higher. I also suspect a lot of people are overestimating how much Brandin Cooks ’s injury helps Kupp.

Robinson had been awfully consistent up until Week 9, and Detroit’s defense is suspect at best. There is always a chance Mitchell Trubisky is just so terrible that Robinson cannot get going, but that hasn’t been the case for the overwhelming majority of games this season.

Slayton is obviously boom or bust, but against the Jets’ defense, the chance to boom is too good to ignore.

Part of the reason I prefer Julio Jones to Cooper Kupp is that I also like Robert Woods (and his higher multiplier) better than Calvin Ridley . I think Cooks’ absence helps Woods more than Mohammad Sanu’s absence helps Ridley.

Are we judging Watkins too harshly for not being awesome when Tyreek Hill went down? Watkins has at least five receptions and eight targets in both games since returning from injury. Hasn’t he proven by now that he’s productive when he’s able to stay on the field?

My only question with Kirk is if we can trust him for cash. The matchup is obviously great, and if you throw out the game he got hurt and Thursday against San Francisco, Kirk is averaging 10.8 targets.

Kelce is literally the only tight end I trust for cash. He's scored at least 7.4 fantasy points in every game this season, and which gives him a higher floor than the rest of the tight ends on my list, even the ones with very high multipliers. That being said, his floor isn’t that much higher than those other guys, so I don't think he's a must-play.

Every tight end has a low floor, so I’m more willing to take a chance on Everett than I might be otherwise. Everett’s multiplier is awfully high for someone who has at least 12.9 fantasy points in three of his last five games.

Herndon's multiplier increased after he was active last week but did not play. It looks like he should practice fully at some point this week and then play on Sunday, but we obviously cannot trust him for cash games.

Howard has been largely shut out of Bruce Arians's offense, but he's difficult to ignore considering Arizona has only had one game all season when they didn't allow a touchdown to an opposing tight end. Howard is a GPP play, even though I expect he'll be more highly owned than Chris Herndon .

I'm surprised Gesicki's multiplier didn't come down after he caught all six of his targets for 95 yards last week. Gesicki was highly touted coming out of the draft last season, and we shouldn't be at all surprised if Week 9 is the start of his sophomore breakout.