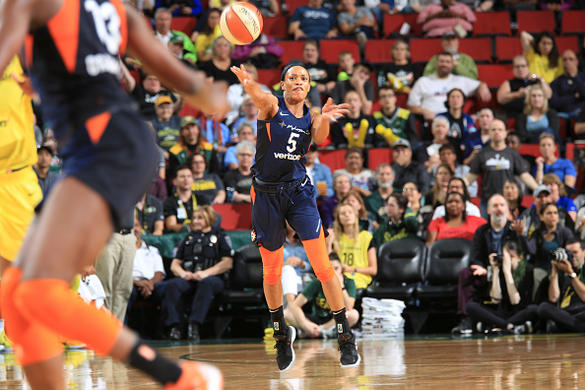 The DFS WNBA Playbook is a labor of love, and as such, only players who I love on a given day make the cut. I don’t think it does anyone any good to list 20+ players, even if that might increase my odds of naming the top performers in any given day. Usually, I wind up with roughly 16 players in the playbook, but I just couldn’t get there for Tuesday’s four-game slate. The problem is there are just too many players I like and not enough that I love.

In slates like this, my strategy is almost always to cram the players I love into multiple lineups, and then fill the end of the roster with more expensive players I like. That is why Brittany Boyd is in three lineups and Sylvia Fowles is in just one.

I really like Fowles and teammate Maya Moore Tuesday, but I would be completely comfortable rostering any of the top forwards. There is no point in downgrading from Boyd to a player I would rather avoid just so I can squeeze Fowles into a roster. Put more simply, the difference between Boyd and her possible replacement is bigger than the difference between Fowles and Breanna Stewart. There also aren’t a ton of playable punt plays Tuesday, so fitting more than two expensive players into a lineup is going to be difficult.

MLB Kirby Yates (family) not yet at Padres summer camp