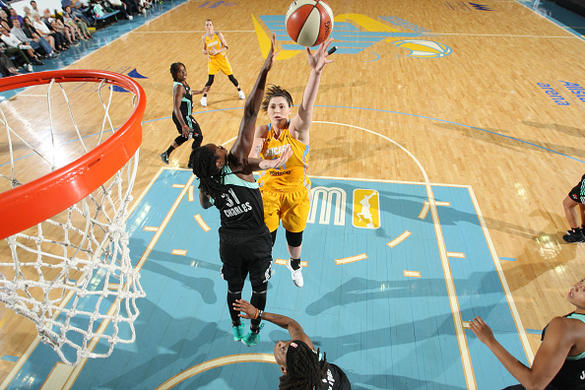 The 2018 WNBA season is off and running after a fun game between the Phoenix Mercury and Dallas Wings Friday night. That game featured two teams who were looking to integrate a couple of key additions into playoff teams from a year ago. Saturday’s game between the Chicago Sky and Indiana Fever promises to be quite different.

The Sky and Fever rosters both saw a lot of turnover in the offseason after they finished near the bottom of the league in 2017. While both teams have plenty of young talent that should rise to the top in due time, it is anybody’s guess how the playing time and shots will shake out early in the season.

The Sky are a bit easier to figure out because we know Courtney Vandersloot, Allie Quigley and Stefanie Dolson are the engines that drive this team. Dolson should dominate Indiana’s frontcourt, but it remains to be seen if Quigley will get many open looks with Vandersloot still playing in Europe.

That leaves three starting spots for the likes of rookies Diamond DeShields, Gabby Williams and Alaina Coates as well as veterans Alex Montgomery, Jamierra Faulkner and Kahleah Copper. All of those players are talented enough to possibly take advantage of playing time, so hopefully, we will learn the starting lineups well before tip-off.

Speaking of talented young players who could take advantage of playing time, the Fever have Erica Wheeler, Kelsey Mitchell, Tiffany Mitchell and Jazmon Gwathmey all fighting for backcourt minutes. Mitchell and Mitchell could both be big fantasy contributors by the end of the year, but it is difficult to play them with any amount of confidence.

After today, we will return to our schedule from last season, where we had a WNBA Playbook and Optimal Lineups any time we had three or more games on a slate. If you want to know why we don’t cover smaller slates, you can look no further than Friday’s $30K Season Tip-Off Showdown, where I tied for first place with 275 other entries. That doesn’t generally happen in larger slates. If you have any WNBA questions that aren’t covered in the Playbook, feel free to hit me up on Twitter or in the comments below. Also, if you are at the Chicago Sky’s home opener on Sunday, look for me at the game.