Fantasy Baseball Daily Round Up: July 27 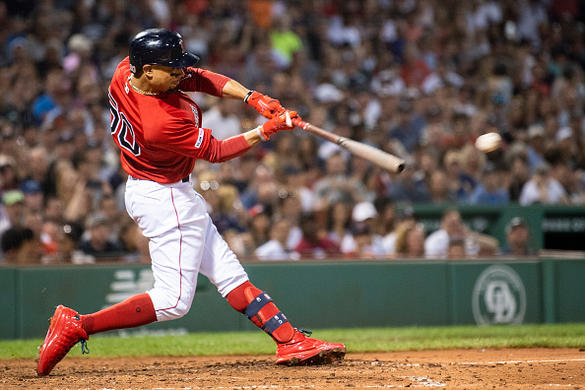 Leverage in trade talks can prevent a team from overpaying in negotiations. However, the Yankees ill fated collapse in starting pitching with the trade deadline looming on the horizon could work against them. James Paxton allowed seven earned runs over four innings including four home runs. This outing also exacerbated the team need to restock the rotation:

From @EliasSports: The Yankees’ starters have allowed 40 runs over their last five games. According to the Elias Sports Bureau, that is the most runs allowed in a five-game span within a season since the 2008 Rangers. Last time the Yankees did this? July 4-9, 1912.

Although this sample could be viewed as a blip for a team leading its division eight and a half games, check out how the starters fared since the inception of the second half:

In almost a perfect storm of struggles prior to the deadline, the organization will need to make difficult decisions about how aggressive to be in adding help for a deep run in the playoffs. Toronto should, and will, ask for the moon in Marcus Stroman trade talks. It’s rumored they asked about Gleyber Torres and Deivi Cruz. Taking a strong stance in negotiations makes sense for the Blue Jays with an eye on the future. Doubt Torres would ever be included in this or any deal, but with the Yankees staff reeling, they will be forced to make difficult decisions about which players to move in order to improve their chances to win a World Series.

Also, the Cubs and Brewers played a one-run game but with differing results and needs heading towards the deadline:

Gio González left the game with shoulder soreness and Pedro Strop incurred his sixth blown save. Both teams could use help, but do they have enough in the minors to get the necessary reinforcements?

Noting the implosion by Paxton last night, here’s the notable performances by starting pitchers from around the league:

Minnesota’s savvy free agent signing of Nelson Cruz continues to pay dividends. He homered for the fifth straight game on Friday night going 3-for-4 with two RBI and a walk:

Nelson Cruz has a HR in 5 straight games for the Twins, becoming the 7th player in the modern era (since 1900) to have a 5-game HR streak for 2 different franchises.

Cruz has launched seven home runs in this five game streak along with hitting nine over his last 10 contests. Also, Max Kepler ’s home run made history for the franchise:

Just when it seemed safe to sell low on Paul Goldshmidt, he’s turned on the power in July. Goldschmidt also owns a home run streak:

Goldy has homered every day this week. ???? pic.twitter.com/RpUhsasTMg

Normally, a three home run game would lead this part of the column, but Mookie Betts racked up four hits including a double and three home runs driving in five in a win over New York:

It’s also important to note, Betts returned to pulling the ball for more power recently as noted by one of his beat writers:

Fueling a Rockies rout in Cincinnati, Daniel Murphy went 2-for-5 with a double, his 11th home run and drove in a career high six runs:

In Friday’s feel good story department, Jeff McNeil hit his 10th home run and finished with three RBI. He still leads the majors with a .340 batting average but hopes to make an addition to his family:

Today in adorableness: Jeff McNeil is literally video chatting his wife right now trying to convince her to adopt a puppy from the North Shore Animal League. pic.twitter.com/9J91XYtg1C

McNeil and his wife will visit the puppy again on Saturday, here’s hoping she relents to adopting “Homer”.

Knowing the trade deadline will pass on Wednesday, teams will be jockeying for position along with deciding if it’s time to buy, sell or hold. One team, Pittsburgh holds a major chip in trade talks if they decide to cash in on their closer:

Since this article preceded the Dodgers hanging on for a win over the Phillies with Kenley Jansen giving up a run on a hit and two walks with one strikeout. He’s converted 25 of 29 save chances this season but his 6.43 ERA and 1.57 WHIP over seven innings this month hint an upgrade could be necessary to win a championship.

Here’s the rest of the high leverage events from Friday night:

More rumors to evolve but many speculate deals will not start until Monday with an avalanche near the deadline on Wednesday.

It does not appear to be serious, but for the prospect speculators:

Dexter Fowler is going for a CT scan because he was hit near the same spot of a break last season. The #Cardinals want a clearer look after x-rays did not show anything here at the ballpark.

Atlanta’s Nick Markakis also could be injured and if he heads to the injured list, Adam Duvall could join the team. He’s hit 29 home runs in 94 Triple-A games this season with a .931 on-base plus slugging percentage.

Looking to snap a losing streak, the Yankees will turn to veteran C.C. Sabathia to oppose Eduardo Rodríguez in Boston. Clayton Kershaw will face Joe Ross in Washington as well in the day slate of games.

Gerrit Cole and Mike Clevinger headline the night games with both making starts on the road.

Be sure to stay with Fantasy Alarm to remain ahead of the competition as the trade deadline nears and across all fantasy fronts.

B. Buxton - CF
MIN
Byron Buxton (family) has arrived in Minneapolis and is being processed through MLB's intake testing protocol.
Buxton was excused from the first weekend of summer camp following the arrival of his second child on Friday. His coronavirus test results should be ready around the middle of the week, and if he's in the clear, he'll be given the go-ahead to join the workouts happening at Target Field. The 26-year-old played well last season when healthy and could be a highly valuable multi-category producer in MLB's planned 60-game sprint.
Added 10:01 pm (EST)
Added 10:01 pm (EST)

J. Guerra - RP
ARI
Junior Guerra has tested positive for COVID-19, Diamondbacks manager Torey Lovullo announced Sunday.
Silvino Bracho also tested positive. Guerra was signed to a one-year, $2.55 million free agent contract in December and could be a valuable bullpen piece for Arizona in this condensed campaign given his ability to work multiple innings in relief. He had a 3.55 ERA, 1.12 WHIP, and 77/36 K/BB ratio in 83 2/3 innings (72 appearances) last season with the Brewers. The 35-year-old right-hander will be put in quarantine and must pass two consecutive COVID-19 tests before he is allowed to return to the D-backs.
Added 9:49 pm (EST)
Added 9:49 pm (EST)

A. Heaney - SP
LAA
Angels manager Joe Maddon confirmed Sunday that Andrew Heaney is locked in as the team's Opening Day starter.
It will be the first career Opening Day start for Heaney, who struck out 118 batters over 95 1/3 innings last season and spent the shutdown period working further and further away from the elbow and shoulder issues that have recently plagued him. He's a worthy mid-to-late round pick in fantasy drafts this summer.
Added 9:23 pm (EST)
Added 9:23 pm (EST)

K. Yates - RP
SD
Kirby Yates is expected to do his intake testing on Monday and Tuesday.
And if he's clear of COVID-19, he could participate in his first summer camp workout on Wednesday. Yates was late arriving to camp due to a positive diagnosis within his family. The 33-year-old right-hander should be among the first relievers off the board in summertime fantasy drafts after posting a 1.19 ERA and 101/13 K/BB ratio over 60 2/3 innings least season while leading all MLB closers in saves with 41.
Added 9:19 pm (EST)
Added 9:19 pm (EST)

S. Bracho - RP
ARI
Diamondbacks manager Torey Lovullo announced Sunday that Silvino Bracho and Junior Guerra have tested positive for COVID-19.
It's unclear whether the cases were diagnosed through MLB's intake testing protocol or before. Either way, the two pitchers will be absent from summer camp workouts until they pass consecutive COVID-19 tests. Bracho suffered a recent setback in his recovery from Tommy John surgery, so it's unclear how much he is able to do at the moment anyway. Guerra signed a one-year, $2.55 million deal with Arizona in December.
Added 9:11 pm (EST)
Added 9:11 pm (EST)

F. Perez - SP
DET
Tigers RHP prospect Franklin Perez (shoulder) threw a bullpen session this weekend at Tigers summer camp.
Perez resumed working from a mound in February after taking several months off to a heal a shoulder issue, and it looks like he should be able to pitch in instraquad games at some point this summer. The 22-year-old was included in the Tigers' initial player pool, but it's unclear whether he'll see any actual MLB action.
Added 8:53 pm (EST)
Added 8:53 pm (EST)

F. Mejía - C
SD
AJ Cassavell of MLB.com writes that Francisco Mejia has "looked sharp" in the Padres' first two instraquad games.
Mejia went 0-for-15 in the Cactus League this spring, but it's always been silly to draw any conclusions from spring training numbers. The 24-year-old former top prospect would seem to be a good option for the Padres at DH and should get a boost in fantasy value with the addition of that role to the National League scene. He's a sneaky post-hype breakout candidate heading into MLB's planned 60-game 2020 campaign.
Added 8:28 pm (EST)
Added 8:28 pm (EST)

K. Lewis - LF
SEA
Mariners manager Scott Servais praised Kyle Lewis' physical condition during a Zoom call with reporters on Sunday.
Lewis finally put his knee issues in the rearview last season and in September delivered an .885 OPS with five home runs over his first 18 major league games. He used the shutdown to work with private hitting, speed, and strength coaches. “Coming back from a very serious knee injury, it takes time,” Servais said. “You might be physically strong and everything checks out, but it’s always in the back of your head. That’s what it looks like to me, that it’s kind of freed him up now. ... The ceiling, the upside for Kyle, the sky is the limit."
Added 8:10 pm (EST)
Added 8:10 pm (EST)