Fantasy Baseball Daily Round Up: July 15 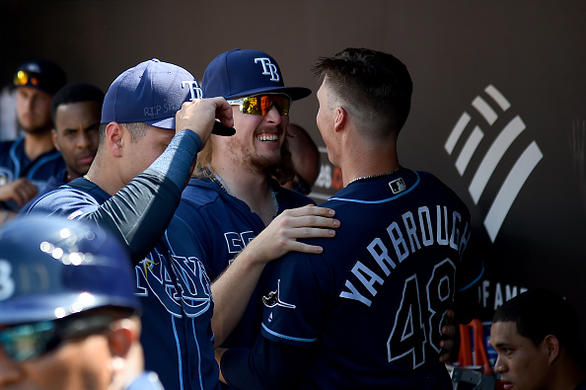 Just when it seems like baseball cannot surprise, a walk-off error provided Oakland with a sweep of the White Sox at home:

Sometimes you just gotta take what the defense gives you

In Boston, the Dodgers took the lead in the 12th inning after a bases-loaded walk to Max Muncy and held on with Joe Kelly recording his first save this season against his former team. A bigger surprise, A.J. Pollock going 3-for-6 with his fourth home run and four RBI. Pollock’s homered in consecutive games going six-for-14 off the injured list with six RBI in three games.

Tampa Bay entered the ninth inning on the precipice of history:

In the history of Major League Baseball, nearly 220,000 games, never before has there been a combined perfect game.

The Tampa Bay Rays are three outs from one. Baltimore remains without a baserunner, and Ryne Stanek (two IP) and Ryan Yarbrough (six IP) have set down 24 straight.

Unfortunately, a single against the shift by Hanser Alberto ended the perfect game and he scored in the ninth to avoid being shutout. Still, Ryan Yarbrough won his eighth game working 6.1 innings as the bulk reliever allowing two hits and one earned run with six strikeouts. Emilio Pagán recorded the last out striking out Trey Mancini for his sixth save.

It feels like the Braves keep plodding along despite a fluid rotation and losing their closer to injury moving to 20 games over five hundred with a sweep in San Diego. Mike Soroka tossed a gem with seven shutout innings giving up six hits and walking one with nine strikeouts. Plus, a little history:

Soroka only needed 83 pitches to carve up the Padres on the road with 18 swinging strikes and 10 called for a robust 33.7 CSW (Called plus swinging strikes) percentage. Nine strikeouts represents a career high for Soroka and he’s made 15 consecutive starts without a loss, the longest streak in the National League.

Here are the other notable starting pitcher performances from Sunday:

Bullpen Notes: Rockies back with Wade

At the end of the first half, Wade Davis lost his grip on the closer role with the Rockies due to an ugly loss giving up four runs to the Dodgers at home on June 27th. Plus, Scott Oberg ’s emergence as a top reliever muddled the hierarchy. However, Davis has since converted three straight saves including two since the start of the second half with his 14th on Sunday in a clean ninth striking out two. Oberg worked two scoreless innings leading up to Davis on Sunday for his eighth hold. For now, it appears Oberg will be the “effector” working the highest leverage moments at any point after the sixth inning with Davis as the traditional closer. Plan accordingly.

Here’s the rest of the high leverage moments from Sunday:

Not many may know him, but Michael Brousseau hit his fourth home run driving in two on Sunday in Baltimore. Brousseau’s blasted three home runs his last two games and owns a .395 average during his brief time in the majors with a 1.241 on-base plus slugging percentage.

Could Robinson Canó salvage his season in the second half? He tallied four hits in Miami including his sixth home run. Cano’s homered in consecutive games and 6-for-11 since the break. Jeff McNeil hit his eighth home run and leads the majors with a .347 batting average.

Another day, another appearance in the hitting notes for Christian Yelich :

.@ChristianYelich just launched his 32nd HR of the season.

Like Cano above, signs of life from Paul Goldschmidt as well? He went 2-for-4 with his 17th home run driving in two. Since the start of July, Goldschmidt’s hitting .303 with three home runs in 33 at-bats.

Both Harold Castro and Niko Goodrum finished with four hits during the Tigers offensive outburst in Kansas City. Castro scored two runs and drove in two. Goodrum swiped two bases and finished with two RBI. For the Royals, Jorge Soler launched his 25th home run in a loss with three more RBI. He’s quietly on pace for 43 this year.

Perhaps Ramón Laureano will be who fantasy analysts thought he’d be? Laureano hit his 18th home run and stole his 11th base in Oakland’s walk-off win. He’s currently on pace for 31 home runs with 19 steals. Not too shabby.

Fueling the Braves sweep, Freddie Freeman launched a three-run home run propelling them to the lead. It’s Freeman’s 24th home run this year and he’s within 10 of his career-high, it’s July 16th.

A.J. Pollock homered for the second straight game and finished 3-for-6 with two runs and four RBI in Boston last night. He ends the series 6-for-14 with two home runs while driving in six. It’s tough to trust Pollock, but he could be on waiver wires out there. Xander Bogaerts (20) and J.D. Martinez (19) hit back-to-back home runs to tie the game in the eighth.

Last, but not least, Fernando Tatis Jr. set a Padres team record becoming the youngest player in team history with four hits. He also provides a highlight in every game:

W. Contreras - C
CHI1
Willson Contreras was ejected from Wednesday's game versus the Indians for arguing a called third strike on a check swing.
Home plate umpire Tim Timmons rung Contreras up himself on a borderline check swing instead of checking with the first base umpire. Contreras objected and slammed his bat down, getting tossed. Victor Caratini was moved from designated hitter to catcher, so the Cubs lost the DH spot.
Added 9:09 pm (EST)
Added 9:09 pm (EST)

J. Grimm - RP
MIL
Justin Grimm exited an appearance versus the Twins on Wednesday with an apparent injury.
Grimm allowed four runs while retiring only two batters before leaving the field with the Brewers' trainer. The team should offer more on his status after the game.
Added 8:51 pm (EST)
Added 8:51 pm (EST)