Fantasy Baseball Daily Round Up: April 20 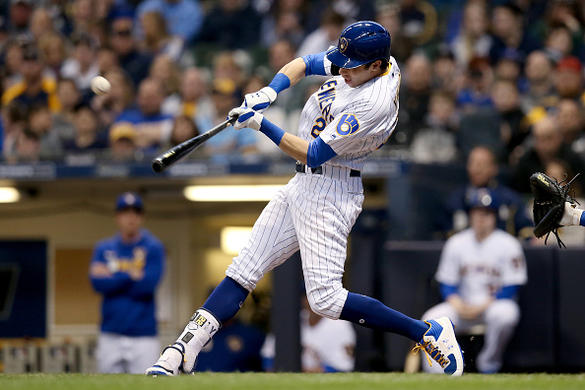 A player’s impact cannot only be measured by his fantasy value, but also how he affects a team. Armed with a cannon at shortstop, playing alongside Manny Machado , Fernando Tatis turned in a herculean effort on Friday night, even if his team lost in extra innings. Tatis led off the game with his sixth home run. He also scored the Padres only other run in the 11th after drawing a walk, stealing two bases and scoring on a ground out by Eric Hosmer . All told, Tatis Jr. racked up a smash and dash with the home run along with three steals in the game. Plus, he’s having fun.

It’s difficult to take the spotlight off of Christian Yelich . He launched his 11th home run, which now leads the majors and drove in two runs to set a Brewers record for RBI to start the season. Yelich currently slashes .350/.442/.813 with 29 RBI through his first 21 games. He will eventually cool off. However, the home run regression crowd seem quiet of late. Time to tour the rest of Friday’s action in the Round Up.

Obviously fantasy owners targeted Jose Altuve for his power upside. Especially given his physical attributes. Altuve hit his eighth home run driving in three last night. He owns a 1.019 on-base plus slugging percentage during his first 76 at-bats. Alex Bregman added his third home run and could be on the precipice of a power surge as he gets healthy.

Speaking of power, check out this crush job by Joey Gallo .

Brett Gardner ’s hitting .200 with 14 hits on the year. But, he’s also hit five home runs among them. As the Yankees get healthy, Gardner could drift from lead-off spot, but he still maintains value while he hits atop the lineup.

Signs of life from Mookie Betts . He went 2-for-4 with his fourth home run. Mitch Moreland went back-to-back with Betts fueling the Red Sox win in Tampa Bay. Under the radar, Brandon Lowe blasted his sixth off of Eduardo Rodríguez in the loss.

Remember when Pete Alonso needed time in the minors in the preseason before joining the Mets? Well, he launched his seventh home run in St. Louis, carries a 1.164 on-base plus slugging percentage and looks like he’s here to stay. Robinson Canó started slowly but racked up three hits last night with two doubles among them. 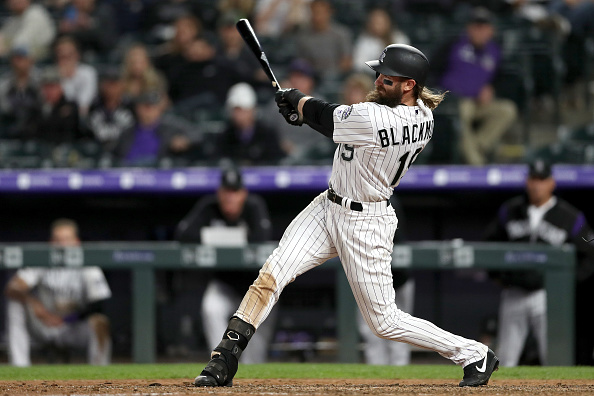 Timing can be key. Charlie Blackmon hit his first home run of the season, a walk-off game winner for the Rockies:

In the loss, Bryce Harper went 5-for-7 with two doubles and an RBI. However, the Phillies may lose Scott Kingery to the injured list and Andrew McCutchen left early with knee inflammation.

All the Mariners do is hit home runs or at least it feels like it. Back-to-back jacks by Tim Beckham and Omar Narváez in the top of the ninth led to a victory. Dan Vogelbach (7) and Jay Bruce (9), also joined the home run parade.

Boston promoted Michael Chavis to bolster the lineup. He could add power to the lineup along with flexibility. Chavis appeared at third base six times in Triple-A, five at second base and one at first. And some guy named Vladimir Guerrero Jr. should make his debut on Tuesday, in Toronto, against the Giants. Reports suggest the kid can rake.

With an assist from the weather, Kyle Hendricks rebounded at home for his first win over seven shutout innings giving up three hits and two walks with 11 strikeouts. Hendricks painted with 29 called strikes and 10 swinging strikes of his 100 pitches for a tidy 39 CSW (called and swinging strike) percentage.

It remains to be seen if Caleb Smith will pitch well on the road this year, but in Miami, he’s almost a slam dunk. Smith won his second decision yielding five hits and an earned run with eight strikeouts in six innings against Washington. Smith racked up 15 swinging strikes and 14 called for a 34.9 CSW percentage. Here’s the best of the rest from Friday night:

It’s not going to warm the hearts of fantasy fans, but Boston does not care about clarity in high leverage. Matt Barnes recorded his third hold firing a clean eighth inning with two strikeouts. He faced the third, fourth and fifth hitters in the lineup with a two-run lead. So, Barnes remains the highest leverage pitcher in the hierarchy. However, Ryan Brasier notched his fourth save. To summarize, both pitchers maintain fantasy value, but predicting usage patterns will be frustrating.

While the saves chasers focus on upside, Sergio Romo gets his second save with a strikeout in a clean outing against the Nationals. Nick Anderson , the speculative add of the week, allowed a home run to Brian Dozier but struck out the side in the seventh for his first hold. Drew Steckenrider and Adam Conley shared the eighth to bridge to Romo. Here’s the rest of last night’s reliever notes of interest: 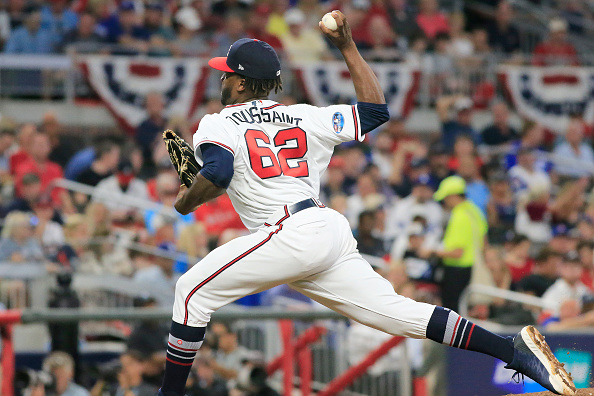 A great day for Ernie Banks, with two doubleheaders on tap. Minnesota will play two in Baltimore along with the Braves in Cleveland. Touki Toussaint faces Trevor Bauer in the second game, providing a potential pitcher’s duel.

Trying to turn a season around in Coors could be less than optimal for Aaron Nola . He will be opposed by Antonio Senzatela with both teams’ bullpens tired from Friday’s extra inning affair.

Off to a strong start this season, Luis Castillo will face the Padres in San Diego with the potential for plenty of swinging strikes.

In injury news, Daniel Murphy will head to Triple-A for a rehab assignment, which clouds the playing time future for Garrett Hampson . Fantasy owners will nervously await news on Starling Marte who left last night’s game after a violent collision with shortstop Erik González .