It’s that time of the week, to peer beneath the veil, and to look for some potentially hidden gems on the waiver-wire with Ray Flowers. 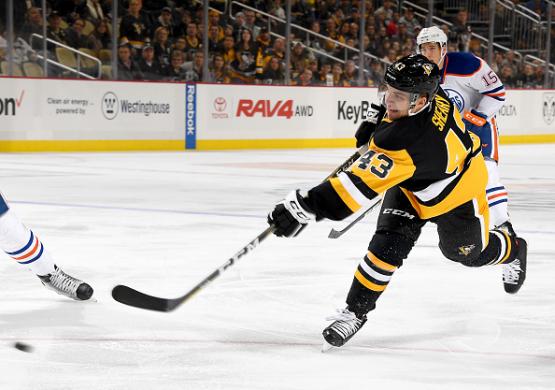 Conor Sheary has scored in each of his last two games, three points in total, while taking nine shots on net. Moreover, his production is sure to stay above average if he is appearing on the power-play so often. Check it – he’s seen more than three minutes of power-play time in three of five outings for the Penguins.

Viktor Arvidsson of the Preds produced just 16 points last season in 56 games, but he’s been on his game this season with 14 points in 22 games. His ice-time average is up to 15:32 per outing, and over his last 11 outings he’s scored three goals while handing out five assists. He’s also a +7 skater and is averaging 3.4 shots a game, an impressive total.

Mikael Granlund has seen over 20 minutes of ice-time the last two outings, and over 18 minutes in 7-straight. In three of four games, he’s been a +1 skater, and he’s posted four points in his last five games. Three of the points have come with the man advantage, all helpers, to push his point total to 14 in 22 games as he searches for his first season of 45-points. Could it finally “happen” for the 24 year old?

Anthony Mantha is 6’5”, 225 lbs. He’s a load. The 22 year old winger has five points in nine games this season, but he’s picked things up a bit the last five outings with two goals, an assist, and 18 shots on net as he’s increasingly more involved in the offense. Only once in five games has he been under 16 minutes of ice action.

David Perron started slowly this season, and after scoring a mere 36 points last season he was on no one’s radar. Well, you might need to reassess and adjust your lens as he’s starting to put up numbers that should make you take notice. Over his last nine games Perron has scored three times with eight assists leading to 11 points. He’s only a +2 skater despite that success, and he’s taken just 18 shots on net, but you can’t argue with the production, can you?

Oscar Klefbom is chewing up nearly 22 minutes of ice-time per outing with just under three minutes of that time coming on the power-play. He’s also seeing 1:39 a game when the Oilers are short-handed. Basically, there isn’t a situation in which he isn’t being trusted to gobble up ice. He’s a (-4) skater the last two games though he was even through 23 games. I’d also point out that he has taken 47 shots on net his last 16 games, a pretty impressive mark for a blue liner.

Dimitry Orlov is a (-4) skater the last two games dropping his season mark down to +4. He also doesn’t have a point in three games. So why is he on this list? Good question. Is it because I had no one else to write about? No, there is something here with Dimitry. Over his last 11 games Orlov has five points, has taken 18 shots on net, has blocked 14 shots and dished out 19 hits. He’s not a star, isn’t very exciting, but he does contribute for those of you in keep leagues.

Jonathan Bernier has allowed two or fewer goals in 8-straight outings, and in seven outings (five starts) in November he went 4-0-1 with a 1.78 ERA and .934 save percentage for the Ducks. John Gibson (2.43 GAA, .915 save percentage) is still the starter, but Bernier is performing very well when called upon.

Juuse Saros is simply a backup with Pekka Rinne taking home the NHL’s First Star of the Month of November. Still, Saros has allowed two goals in two games, and the Preds continue to see their GAA drop (it’s down to 2.47). If Rinne got hurt...

NHL Cody Glass aims to be a dominant center for Vegas

NHL Agent: 'Nothing new to report' for Anthony Cirelli

J. Mysak - F
MTL
Jan Mysak has been invited to participate in a selection camp for Team Czech Republic ahead of the 2021 IIHF World Junior Championship.
Mysak, who was chosen 48th overall in the 2020 NHL Draft by the Montreal Canadiens, played at the 2020 tournament and the Czech team that finished seventh. He had one goal and one assist in five outings. Mysak was one of 42 players chosen to take part in the team's selection camp. The 2021 World Junior Championship takes place from Dec. 25-Jan. 5 at Rogers Place in Edmonton.
Added 1:15 pm (EST)
Added 1:15 pm (EST)

T. Stuetzle - F
OTT
Tim Stuetzle will reportedly report to Germany's camp ahead of the 2021 IIHF World Junior Championship on December 6th, in Fussen.
Stuetzle, who is nearly back to full health from a broken hand, could join the Ottawa Senators after the tournament, which is scheduled for Dec. 25-Jan. 5 at Rogers Place in Edmonton. He still needs to be released from his contract with Mannheim of the DEL, but it's believed that won't be an issue.
Added 12:19 pm (EST)
Added 12:19 pm (EST)

N. Aube-Kubel - F
PHI
Nicolas Aube-Kubel has been working out and skating with some of his teammates in Philadelphia ahead of training camp.
Of course, we don't know when training camp or the regular season will begin, but Aube-Kubel is working to be ready for an early January start to the campaign. Whenever the season does happen, it will be an important one for him. He took big strides towards establishing himself as a NHL regular last season by scoring seven goals and 15 points in 36 contests with the Flyers. “It’s been a long offseason, and I’m excited to get going,” he said. “That’s why I came in earlier — to get ready for the season. It’s going to be exciting, and I can’t wait." Aube-Kubel signed a two-year extension in September that comes with an annual value of $1.075 million.
Added 10:57 am (EST)
Added 10:57 am (EST)

D. Holloway - F
EDM
Dylan Holloway recounted his battle with COVID-19 and that of his roomates.
“I was pretty asymptomatic,” Holloway said, who was sick in early September. “But the first couple of days, I’m not going to lie, I was really tired all the time. I can definitely see where it’s kind of a big deal to some people. Just getting up off the couch was kind of a big task. Other than that, that was about it, I felt pretty good.” Unfortunately one of his roommates had a harder time with the virus. The roommate lost his sense of smell and taste for about a month. Holloway is with Team Canada now for their world junior selection camp, but he isn't done being impacted by the virus, albeit this time less directly. Two players in the camp tested positive on Nov. 23 and as a result, the entire camp has been put into quarantine until Dec. 7. He was also quarantined for two weeks when he crossed the border to attend the camp, so his current quarantine is his third in three months. He's still working out while going through his latest stint of isolation and getting his homework done. The plan is for him to return to the University of Wisconsin after completing his stint in the world juniors to continue his sophomore season with their NCAA team.
Added 9:21 am (EST)
Added 9:21 am (EST)

M. Duchene - F
NSH
Matt Duchene admitted that his first season in Nashville had ups and downs.
"Up and down," Duchene said of his season. "We went through a lot of adversity this year, myself included. I think every adverse situation you get put in is a chance to grow and a chance to learn and move forward. ... I love this team, I love this group and I believe in this group. Better days are ahead for sure." The 29-year-old managed to score just 13 goals and 42 points in 66 games with the Preds. They'll need him to produce way more offense if they're going to be serious contenders in the Western Conference in 2021.
Added 12:04 am (EST)
Added 12:04 am (EST)

N. Merkley - F
NJ
Nick Merkley's time in Finland is over as his loan agreement with Assat has expired.
Merkley had four goals and 13 points in 19 games with Assat. Merkley was acquired from Arizona in the Taylor Hall trade and he had a goal and an assist in four games with the Devils. He will have a chance to earn a spot with New Jersey in training camp. Merkley was selected in the first round, 30th overall in 2015 and has yet to make any impact, or even much of a dent, in the NHL.
Added Yesterday 11:13 am (EST)
Added Yesterday 11:13 am (EST)

C. Pickard - G
DET
The Detroit Red Wings have loaned goaltender Calvin Pickard to the Vienna Capitals of the ICEHL.
Pickard will get in some playing time in the Austrian capital before the start of training camp. Pickard is expected to play for Grand Rapids of the AHL which is tentatively set to start action on February 4. Pickard is third in the Detroit pecking order as far as their goaltending depth chart is concerned as Jonathan Bernier and Thomas Greiss are definitely ahead of him. Pickard was 0-2-0 for the lowly Red Wings last season with a 5.46 GAA and a .767 save percentage. He was better in the AHL with a 17-12-4 mark to go with a 2.86 GAA and a .903 save percentage.
Added Yesterday 10:48 am (EST)
Added Yesterday 10:48 am (EST)

G. Sparks - G
VGK
The Orlando Solar Bears of the ECHL have signed goaltender Garret Sparks to a one-year deal.
It's a homecoming of sorts for Sparks who played for Orlando from 2013-16 when it was the Maple Leafs ECHL farm team. Sparks was selected in the seventh round of the 2011 Draft and has played 38 games at the NHL level, 37 with Toronto and one last season with Vegas. He is 14-18-2 with a 3.11 GAA and a .897 save percentage in his NHL career and likely will be the starter for Orlando when play begins on December 11.
Added Yesterday 10:21 am (EST)
Added Yesterday 10:21 am (EST)