Sean Mitchell brings you his top waiver wire adds for Week 8 of the fantasy football season! 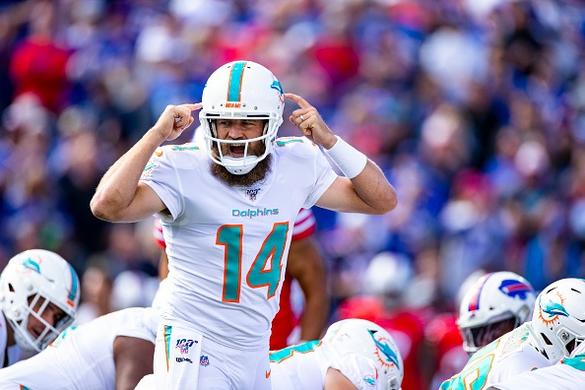 Welcome back to the “in case you missed them,” Thursday waiver article! Hopefully, everyone was able to lock down some nice pick-ups from the weekend including guys such as Matt Stafford, Chase Edmonds , Lat Murray, Ty Johnson, Corey Davis , and Gerald Everett , as provided in the Monday waiver article by Mr. Dan Malin. IF you did not, let’s get down to who you should be looking at to add for Week 8!

Mason Rudolph (10% (+4) YAHOO – 6.4% (+1.1) ESPN)- Rudolph was cleared this past week for full-contact practice after sustaining a pretty good knock to the head a couple of weeks ago against the Ravens, resulting in a timely concussion for the back-up Steeler QB. This has led the Steelers to using their third-string QB in Devlin Hodges, who has not exactly been the FCC First-Team All Offensive Player that he was in college. Hodges had a bit of a struggle in Week 6 in Los Angeles facing the Chargers who held him to 132 yards through the air. With this being said, it is likely the Steelers are very much wanting Rudolph back, so if you have a need, he is there and should be back following their bye week in Week 7.

Ryan FitzMagic (3% (+0.7) YAHOO – 1.3% (+0.7) ESPN)- The Magic is back, baby! The Dolphins decided enough was enough with second year QB Josh Rosen , and handed the reins back over to Ryan Fitzpatrick last week against the Bills. Fitz was quite decent shockingly enough, as he faced a tough task in the second overall ranked Buffalo Bills D. Fitz went 23-35 with 282 yards through the air and one touchdown, but also threw one interception (this was rhetorical) on the day. Either way, it seems they will continue to start Ryan Fitzpatrick hopefully, and for a guy who can run and throw, he has decent upside and could be a sneaky play against the Pittsburgh Steelers on Monday Night Football.

Wendell Smallwood (1% (0.1) YAHOO – 0.9% (0.8) ESPN)- With Adrian Peterson shaken up last week, Smallwood could potentially step into a larger role than just the passing game, as he had been anointed last week against the Niners with starting RB Chris Thompson side-lined due to a toe injury. Peterson left late in last week’s game due to a high-ankle injury, although he is stating he is “fine”, he has yet to practice this week. It has already been ruled that Chris Thompson WILL NOT play, and Peterson seems to be in line to play, however, this is worth monitoring and you can still stash Smallwood as he is the “passing” down back in the role of Chris Thompson for the time being.

Jaylen Samuels (14% (-1) YAHOO – (11.8% (-4.5) ESPN)- This is more of a look-ahead stash play for this week, as Samuels has made a much quicker return to practice than expected. Samuels returned after only two weeks after having a knee scope, a few weeks earlier than the projected four-to six-week stint. As one should assume, he will likely go right back into his regular back-up role behind starting RB James Conner , sending Benny Snell back to the bench. With the Steelers also getting Mason Rudolph back, we saw how these two connected quite well in the two games before both came up with injuries. Something to monitor here and stash if you have an extra roster spot.

Alfred Morris (0% (+0.0) YAHOO – 0% (+0.0) ESPN)- That is correct, Alf is not owned in any leagues and for good reason. I would not be putting Alfred Morris anywhere near my article if Mr. Malin didn’t put eight running-backs into his Monday article. That is neither here nor there, the key here is monitoring the status of David Johnson , as Morris was signed earlier this week as a bit of a relief to Chase Edmonds ,if DJ happens to become “Inactive” once again right after the game begins. This more than likely isn’t even worth a stash, yet if DJ does happen to sit, Alf could get a back-up role to Edmonds this week against the Saints. If you are having bye week problems, or injurie and bye week problems at RB, keep this in mind. 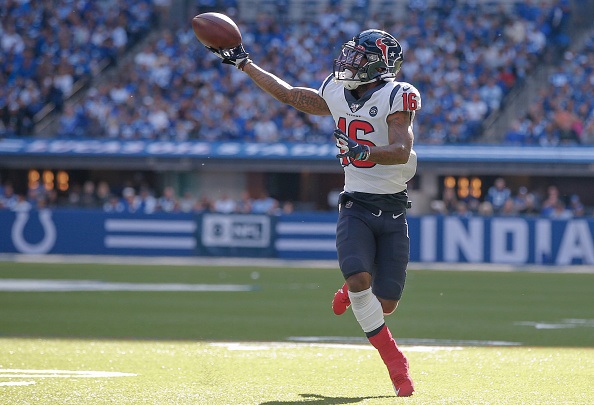 Keke Coutee (17% (+3) YAHOO – 22.5% (+0.9) ESPN)- Both Coutee and Kenny Stills should benefit with the few week absence of starting WR2 Will Fuller in Houston. Fuller went down this past week, and could be side-lined for 3-6 weeks. With that said, Keke could see more time on the outside, with both he and Stills also sharing time in the slot.  This could be a major upgrade for Coutee here, as we know that teams love to double-up on DHop, so this could play right into his expanded role. I would look to pick-up Coutee if he is still on your wire, in which he should be, because he is on all three of mine.

A.J. Brown (19% (+2) YAHOO – 13.3% (+1.9%) ESPN)- The Titans had a glimpse of hope last week as the starting QB job was turned over to back-up Ryan Tannehill (who was also my number 1 QB on last Thursday’s waiver article). Both Brown and Corey Davis were the main beneficiaries in terms of the passing game, as both saw at least seven targets (Brown saw eight) on the day. Brown turned those eight targets into six receptions for 64 yards. Did not hit pay-dirt, but out-targeted Davis in the red zone by a count of four to Davis’s one. We can safely assume Tannehill will keep the starting job, and this should allow Brown to continue to trend upwards heading into next week’s tilt with the lowly Buccaneers.

DaeSean Hamilton (6% (+1) YAHOO – 8.4 (+0) ESPN)- Hamilton’s role was recently expanded as of yesterday. The trade of former WR2 Emmanuel Sanders to the Forty-Niners could potentially pay some nice dividends to Hamilton here. In last week’s loss to the Chiefs, Hamilton was targeted five times, only catching two balls for a measly four yards. However, Hamilton has been targeted 12 times over his past three games, and we can only expect this number to rise with the 44 vacated targets that were amassed by Sanders during the first 7 weeks of the season. Hamilton obviously is on BYE this week, so this is clearly a stash play until Week 9.

Kyle Rudolph (30% (+2) YAHOO – 21.2% (+8.1) ESPN)- We are fully aware that the Vikings have been mainly run first for the first six weeks of the season, however we have seen them shift a bit over the last two weeks and throwing the ball quite a bit more. Adam Theilen was ruled out yesterday, meaning that this offense will be a little short on pass-catching option tonight against the Skins. With that being said, Rudolph has his best game of the season up to this point last week when Theilen left the game after the first quarter, catching five balls on six targets for 58 yards and a score. I will look for that to continue tonight in hopes he can replicate his week 7 performance.

Jonnu Smith (3% (+3) YAHOO – 0.4% (+0.3) ESPN)- With Delanie Walker banged up with injury, Smith filled in nicely for the Titans last week against a decent Chargers defense. Smith corralled all three of this targets for 64 yards on the day. This is a strict last-minute resort type play here in Smith, but I know from the FA user chat that TE can be a straight hell-hole, so with that said, if you are hurting at TE because of bye weeks or injury, this could be a go-to plug play if Walker stays on the sidelines once again this week, as he has yet to practice.

New York Jets–Many have ditched the Jets D/ST since the big loss to the Pats. Go figure, it is the Patriots, but if you look ahead a little you will see that the Jets have a very admirable schedule left to go for their D/ST. Matches with MIA (2x), NYG, WAS, OAK, CIN, before playing BAL, PITT, and BUFF in their last three games means that this D/ST should have quite the potential. If you are streaming defenses, and are looking for a ROS pick-up, this is your ticket.

Green Bay Packers– The Packers are another D/ST that seems to be dropped week in and week out, for what reason I am really not certain. My guess is that they are facing the Chiefs this week, likely to be WITHOUT starting QB Patrick Mahomes for a few more weeks. Even though this game is in Arrowhead Stadium, I have no problems at all fading Matt Moore , folks. If you missed out on the good defenses for this week, including the NYJ, I would look right here at the GB Packers D/ST for this week.

NFL Richard Sherman in talks to return with 49ers

NFL 49ers beat: 'Loose plan' is to sprinkle Lance in

NFL Trey Lance could start 'sooner than you think'

S. Diggs - WR
BUF1
Stefon Diggs played through a torn oblique during the Bills' 2020 postseason.
Diggs was on the injury report throughout the playoffs but didn't miss any games. It's a serious injury, though Diggs is having a normal offseason and will be 100 percent for training camp. Buffalo moved on from John Brown but they have Diggs, Gabriel Davis, and Cole Beasley all returning. The signing of Emmanuel Sanders should also help in 10 personnel for the Bills, who used four-wide sets on 14 percent of their plays last season.
Added Yesterday 11:01 am (EST)
Added Yesterday 11:01 am (EST)

D. Eskridge - WR
SEA
Seahawks GM John Schneider said rookie WR D'Wayne Eskridge could play a "number of different positions."
Eskridge will return kicks and be a gunner on special teams in addition to playing out wide. Coach Pete Carroll has also said he could be used in the run game. The Seahawks are planning a Tyreek Hill-like package for Eskridge, one of the most explosive receivers in this year's class. Eskridge only needs to hold off Freddie Swain to open the season as the No. 3 receiver behind DK Metcalf and Tyler Lockett.
Added Yesterday 9:32 am (EST)
Added Yesterday 9:32 am (EST)

M. Maye - DB
NYJ
Jets coach Robert Saleh said he hopes the team can get an extension done with franchise-tagged FS Marcus Maye this offseason.
This comes after GM Joe Douglas said he plans to revisit contract talks with Maye now that the draft is over. Maye was asking for $15 million annually prior to getting franchised, a price the Jets have been unwilling to meet. The sides have until July 15 to get something done.
Added May 08 12:10 pm (EST)
Added May 08 12:10 pm (EST)

R. Sherman - DB
SF
Free agent Richard Sherman has "been in talks" with the 49ers about a possible return.
Sherman has also talked with the Seahawks and has interest from the Saints and Raiders. There's nothing imminent, but returning to the 49ers remains in play for the 33-year-old. Sherman's market should start to heat up over the coming weeks.
Added May 08 12:03 pm (EST)
Added May 08 12:03 pm (EST)

D. Gardeck - OL
ARI
Cardinals LB Dennis Gardeck (knee) is expected to open the season on the reserve/PUP list.
Gardeck torn his ACL in Week 15 last year. He had a breakout season before going down with seven sacks on just 93 defensive snaps. Even with the injury, Gardeck was still given a second-round tender ($3.39M) this offseason. Assuming he lands on PUP, the Cardinals' special teams captain should have a chance to return when first eligible in Week 7.
Added May 08 9:19 am (EST)
Added May 08 9:19 am (EST)

J. James - OT
DEN
Broncos placed RT Ja'Wuan James (Achilles) on the reserve/NFI list.
James will likely spend most of the season on NFI, but the Broncos are hoping he can make a late year return. There's talk the team could recoup some of his signing bonus and $10 million salary. Dalton Risner and Calvin Anderson are in-house options to replace James. Denver is also meeting with free agents Bobby Massie and Dennis Kelly.
Added May 07 6:20 pm (EST)
Added May 07 6:20 pm (EST)