Matt Selz breaks down the starting spots and potential values to find the best DFS NASCAR plays for the Consumers Energy 400 from Michigan International Speedway! 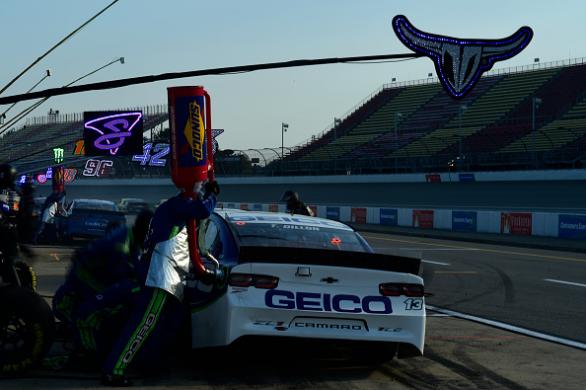 Saturday’s race is in the books and it was a great opening salvo for the weekend and the choose cone was in full effect all the way to the final restart as drivers tried to figure out the strategy for the restarts. We saw plenty of multi-groove racing throughout the race and the traction compound in the upper groove was certainly an equalizer as restarts were able to stay four-wide at times for a few laps and drivers were able to make daring passes while carrying momentum. We need to keep this in mind for Sunday’s race that will be run at a similar time of day at the same track and with many of the same cars we saw on Saturday, though they will have a bit of time to work on them to adjust from Saturday’s results.

The starting lineup for Sunday’s race, being called the Consumers Energy 400 but it’ll be the exact same length as Saturday’s with the same stage lengths, though no competition caution is in play, was set from the finishing positions of Saturday’s FireKeepers Casino 400. The drivers that finished 21-39 on Saturday will start there on Sunday and those that finished in the top-20 will be inverted meaning Kevin Harvick, the winner, will start P20 and Chris Buescher will start P1 after finishing 20th on Saturday. Drivers that go to backup cars for Sunday’s race will drop to the rear on the pace laps and be scored from their original qualifying spots. As of late-Saturday night, Tyler Reddick, Chris Buescher, and John H. Nemechek are believed to be going to backup cars so be aware of that when looking at their starting spots.

There is a new set of DFS Rankings out for this race as well as new projections up. The Track Breakdown can still be referenced, it just doesn’t include Saturday’s results and the same goes for the Podcast as well.

I will be using Average Running Position a fair bit in the playbook, that’s simply an average of the place the driver was running on each single lap of the race for the laps the driver was on track. Take the place on each lap, add them up, divide by the number of laps they ran, and you have the ARP.

These charts have been updated from Saturday’s race but again are simply a guide to show general strategies for the race. They aren’t hard and fast rules but rather showing but a starting spot averages regardless of driver over the last five races at Michigan. 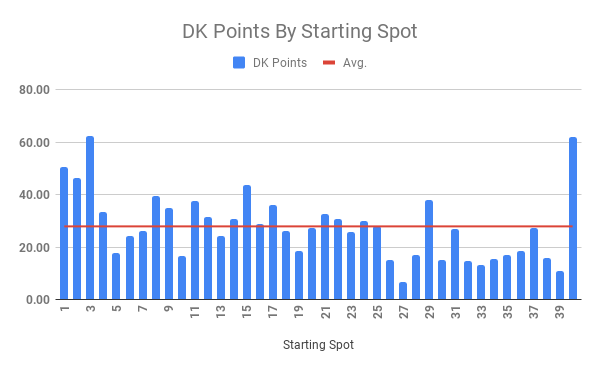 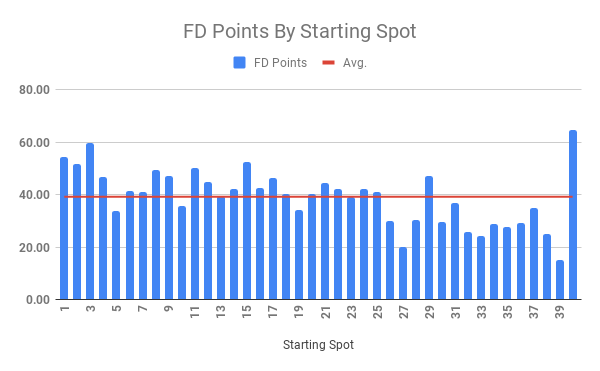