Justin Vreeland is here to bring you the latest news from the around the league's training camps including position battles and the latest injury news. 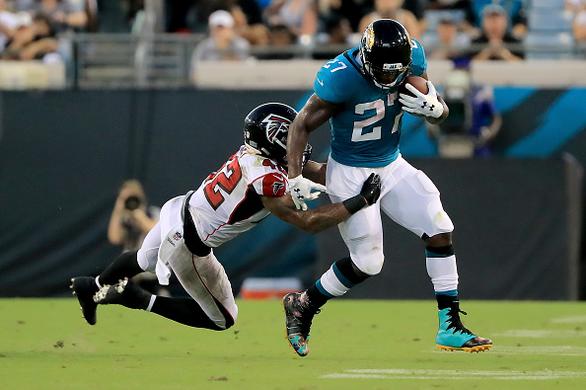 Los Angeles Rams were winners over the Houston Texans 21-20:

Indianapolis Colts were victorious over the San Francisco 49ers 23-17:

Cardinals Wide Receiver 2: Rookie Christian Kirk has made waves and moved himself up the Cardinals depth chart, can he put a stamp on becoming the number two receiver?

Cowboys Wide Receiver 1 and 2: Cole Beasley will man the slot, we know that, but Allen Hurns , Terrance Williams , and Michael Gallup are all fighting for two starting spots outside. Who will perform tonight? 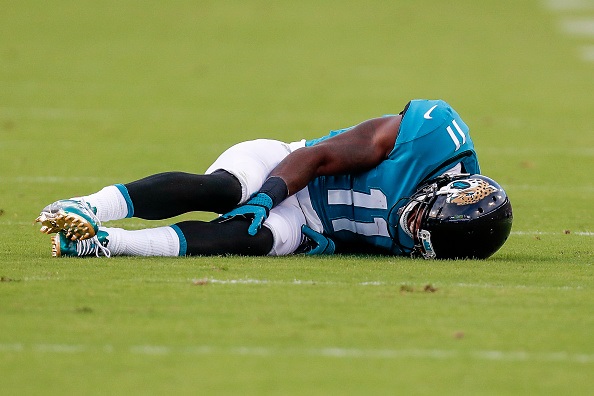 Marqise Lee had to be carted off the field yesterday with a knee injury. It looked bad; avoid him in drafts until further news.

Carson Wentz still has not been cleared for contact. His week 1 status is getting even murkier.

The Colts have traded linebacker Antonio Morrison to the Packers in exchange for defensive back Lenzy Pipkins .

Corey Coleman is not a lock to make the Bills’ roster.

Eric Decker announced his retirement from the NFL.

Mike Gillislee is unlikely to make the Patriots final roster.

C. Beasley - WR
BUF1
Bills WR Cole Beasley said he broke his fibula at the end of the season.
It was listed as a "knee" injury on Buffalo's injury reports throughout the postseason. Beasley said it "hurt" in the Wild Card round against Indy but was "slightly less" painful in both the Divisional Round and Conference Championship. Though not a full break, it's possible the 31-year-old undergoes offseason surgery before returning for OTAs and minicamp.
Added 1:54 pm (EST)
Added 1:54 pm (EST)

M. Schwartz - OT
KC
Chiefs coach Andy Reid said he's "not optimistic" RT Mitchell Schwartz (back) will be available for Super Bowl LV.
It's uninspiring news after the Chiefs lost LT Eric Fisher with an Achilles' injury in Sunday's win over the Bills. Kansas City has plugged holes up front with Mike Remmers, Andrew Wylie and Nick Allegretti to this point and will likely be forced to continue doing so with Schwartz eyeing another absence for the Super Bowl. Wylie, an undrafted free agent guard, will continue replacing Schwartz in Tampa Bay.
Added 1:43 pm (EST)
Added 1:43 pm (EST)

T. Brady - QB
TB1
Tom Brady has an adjusted completion rate of 68.6 percent over his three 2021 postseason games.
That marks a 6.5-point drop from his regular season adjusted completion rate, which accounts for throw aways, drops, spiked balls, batted passes, and passes where the quarterback was hit while he threw the ball, per Pro Football Focus. Only Russell Wilson -- who only played one playoff game -- has a lower adjusted completion rate this postseason. Brady and the Bucs made it out of Green Bay with a Super Bowl berth despite his three interceptions to go along with three touchdown tosses against one of the league's top secondaries. Brady hasn't gotten much help from his pass catchers, who have recorded a dozen drops in three postseason contests (the adjusted completion rate accounts for drops). The 43 year old's accuracy issues could pose problems for the Bucs offense in the Super Bowl against a Kansas City secondary that allowed the league's fourth lowest completion rate in 2020.
Added 11:12 am (EST)
Added 11:12 am (EST)

M. Brown - WR
BAL1
Ravens general manager Eric DeCosta said he was happy with how the team's wideouts played in 2020.
In a wide-ranging interview with reporters Monday morning, DeCosta said he's not singularly focused on bolstering the receiver position this offseason. “We have a running attack that’s the best in football and probably the best in the history of football," DeCosta said when asked about adding pieces to a Baltimore passing offense that struggled throughout 2020. DeCosta said he was "very happy" with rookie wideouts Devin Duvernay and James Proche, and called Marquise Brown a "legitimate playmaker." "Everybody is going to talk about WRs a lot this offseason, but it doesn't sound like [DeCosta] envisions some silver bullet 'fix' there," Ryan Mink, the team's editorial director, said on Twitter. The Ravens would figure to be in the running to sign free agent wideouts like Kenny Golladay, Chris Godwin, and Allen Robinson, but it sounds like DeCosta isn't committed to pouring resources into the team's passing attack. Any free agent receiver addition would be an iffy bet for fantasy purposes in the Ravens' low-volume passing offense.
Added 10:37 am (EST)
Added 10:37 am (EST)

L. Jackson - QB
BAL1
Ravens general manager Eric DeCosta said the team could sign Lamar Jackson to a contract extension this offseason.
This should (temporarily) quiet the L-Jax skeptics who have been critical of his passing acumen in recent months after his completion rate dipped and his otherworldly 2019 adjusted yards per attempt of 8.9 fell to 7.6 in 2020. The team is 34-12 in Jackson's starts over the past three seasons on the strength of an efficient offense predicated on dominating opponents on the ground. It's crystal clear that the Ravens are committed to Jackson, who, at 24, might already be the best dual threat quarterback in league history. He has 2,906 rushing yards over his 46 NFL games, or 63.17 yards per contest. The team will need to improve their wide receiver group and make the offense far less predictable in 2021 if Jackson is going to make the leap as a passer. He would become an unrestricted free agent in 2023 if the Ravens can't come to terms on a long-term deal.
Added 10:12 am (EST)
Added 10:12 am (EST)

I. McKenzie - WR
BUF
Isaiah McKenzie caught his lone target for a six-yard touchdown in the Bills' AFC Championship loss to the Chiefs.
The Bills' fifth wideout, McKenzie was in on a quarter of the offensive snaps this season after re-signing on a one-year deal. He ended the year with career highs in catches (30), yards (282), and touchdowns (5) on 34 targets as a high-percentage option out of the slot and near the line of scrimmage. McKenzie will be 26 this offseason and could be brought back for his sure hands and reliability.
Added Yesterday 11:11 pm (EST)
Added Yesterday 11:11 pm (EST)

G. Davis - WR
BUF1
Gabriel Davis failed to catch any of his three targets in the Bills' AFC Championship loss to the Chiefs.
It was a rough finish to what was a flashy rookie season for the fourth-rounder. Davis played 73% of the Bills' snaps and was a regular in three- and four-wide sets with John Brown in and out of the lineup most of the season. Davis appeared in all 16 games and went 35-599-7 on 62 targets, averaging a robust 17.1 yards per catch as a big-play specialist and red-zone threat. Davis is a legit NFL wideout and could be in line for a bigger 2021 role if the Bills decide to move on from Brown in the final year of his contract. Davis' arrow is screaming upward in an aggressive passing offense.
Added Yesterday 11:07 pm (EST)
Added Yesterday 11:07 pm (EST)

D. Knox - TE
BUF1
Dawson Knox caught 6-of-8 targets for 42 yards and one touchdown in the Bills' AFC Championship loss to the Chiefs.
The targets tied a season high for Knox while the six grabs were his most of the year. Knox's sophomore campaign was pretty similar to his rookie one, producing a 24-288-3 line on 44 targets after turning 50 looks into 28-388-2 last season. Knox has a ton of athleticism and a nose for the end zone with two playoff scores, but he's unlikely to be drafted inside the top 12 tight ends in 2021 fantasy leagues. Still, there's hope for a third-year leap in an aggressive Buffalo offense. Knox will likely be hyped as a late-round sleeper at the position.
Added Yesterday 11:03 pm (EST)
Added Yesterday 11:03 pm (EST)