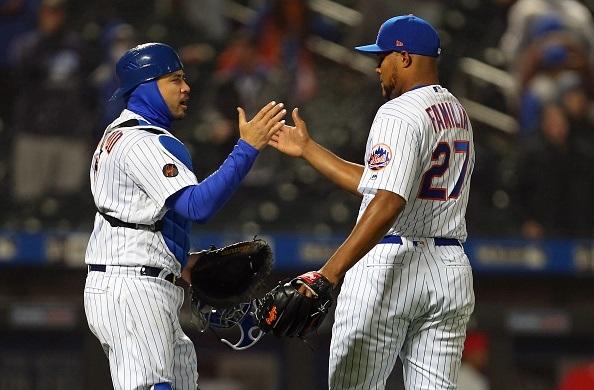 Welcome back to another year of the Bullpen Report! It has been a fun start to the season and I know we are all excited that baseball is finally back. If you were with us last season, you know what to expect, however, there will be new additions to the report throughout the year so stay tuned! Each week I will breakdown closers and middle relievers in many different ways to provide you with all the information you need to have a successful fantasy bullpen. Let’s dive in!

Dominic Leone (36% owned) – Has there ever been a more obvious closer for this section than Leone currently is? The Cardinals brought in Greg Holland to be the team’s closer and he is set to join the club Monday. On top of that, Leone blew his first and only save opportunity of the season on Tuesday when he gave up back-to-back home runs to Christian Yelich and Ryan Braun. He was one out away from securing a 4-3 Cardinals victory before the two home runs. It remains to be seen if Leone would be called upon for another save opportunity (if one arises) before Holland takes over the gig Monday.

Blake Parker (60% owned) – Parker has gotten off to a rocky start, coughing up two runs in just 3.1 innings pitched. The Angels have already shown that they have little faith in Parker as their closer by not naming him the closer early in the spring. He had a great year last year and strikes out hitters at a strong rate, but if he were to lose the job, his value would plummet. Cam Bedrosian, Jim Johnson, and Keynan Middleton are all pitchers in the Angels bullpen that could get save opportunities soon. It is a situation that must be monitored. Middleton is worth adding in deeper leagues. 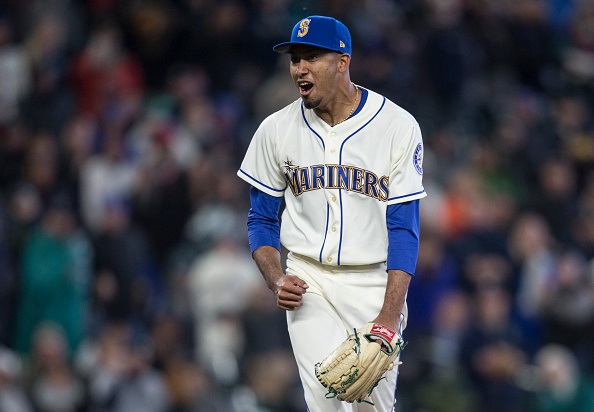 Edwin Diaz (98% owned) – Diaz has been absolutely filthy and lights out to begin the season. He has pitched three shutout innings to the tune of a 0.00 WHIP with eight strikeouts. He has also already racked up three saves and has provided great value to fantasy owners so far. Diaz has always had nasty stuff and now in his third season in the bigs, he could be poised for a breakout campaign at a very young age (he just turned 24). His current pace is of course unsustainable, but there is little reason to believe he can’t finish as a top-5 closer this season. Top-Tier. YTD stats: 3 innings, 3 saves, 8 strikeouts, 0.00 ERA.

Jeurys Familia (90% owned) – Fantasy owners who were worried about the news that the Mets would use a “closer by committee approach” (this was never a worry for me) have to be relieved that Familia has received all three of the Mets save chances to begin the season. Familia is off to a fantastic start, tossing 4.1 shutout innings, picking up three saves, and striking out five. With his blood clot woes from last season behind him, there is no reason to not believe that Familia can return to his 2016 form in which he posted a 2.55 ERA while leading the league in saves with 51. He will continue to be a steal of 2018 fantasy drafts. Middle-Tier. YTD stats: 4.1 innings, 3 saves, 5 strikeouts, 0.00 ERA.

Kenley Jansen (99% owned) – Normally the premier closer in all of MLB, Jansen is off to an atrocious start. In his first outing of the year he was called upon to hold a 0-0 tie, but allowed Joe Panik to take him deep which led to the Dodgers falling to the Giants 1-0. In his second outing, Jansen was tasked with holding a three run lead; Chris Owings blasted a three-run home run off him to tie the game up and give Jansen his first blown save of the year. Two innings, four runs, zero strikeouts. You would not think this is Jansen that is being talked about. He said he is working through some mechanical issues. Fantasy owners should hope he turns it around quickly and makes good on the expensive price tag he came with in drafts this season. Top-Tier. YTD stats: 2 innings, 0 saves, 0 Ks, 18.00 ERA.

This season, in a slightly different fashion from last year, this section will focus strictly on closers in waiting or closer capable guys and how they are performing. Each player of note will also include their stats from the 2017 season for the foreseeable future. 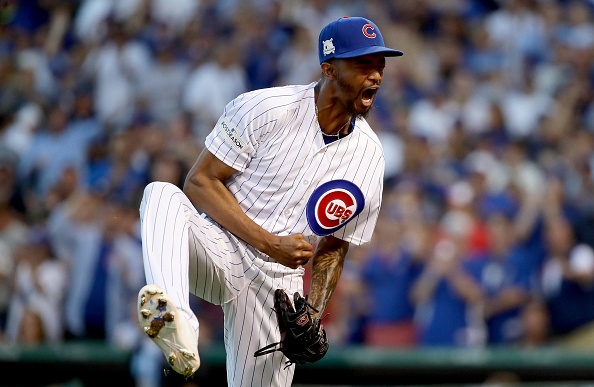 C.J. Edwards (22% owned) – The String Bean Slinger is off to a fine beginning of the year. He has pitched two innings, struck out three hitters, and picked up a hold. Edwards would likely grab the closing gig for the Cubs if Brandon Morrow falters or sustains an injury (something that has been common in his career). Edwards is worth owning in most leagues given the great ratios he provides as shown over the past two seasons. He has been nearly unhittable to this point in his career with an opponent’s BAA (batting average against) of just .135. His 12.75 K/9 last year is also very strong. YTD stats: 2 innings, 1 hold, 3 Ks, 4.50 ERA.

A.J. Minter (17% owned) – The hard throwing left hander has made three shutout appearances to begin the season. He has yet to record a strikeout, but given his 15.60 K/9 across 15 innings last year, the strikeouts are coming soon. Minter is behind Arodys Vizcaino for save chances and given Vizcaino’s fantastic start to the season (three shutout innings, six strikeouts, and a save) it may take longer than many expected for Minter to become the Braves closer. YTD stats: 3 innings, 0 holds, 0 Ks, 0.00 ERA.

Kyle Barraclough (29% owned) – Barrclough has been business as usual to begin the year. He has made three shutout appearances, allowed just one hitter to reach base against him, and recorded five strikeouts. Those numbers should come to little surprise given his career 2.82 ERA, .189 BAA, and 224 strikeouts across 166 career innings. Barraclough is easily the best arm in the Marlins ‘pen and it really doesn’t make any sense as to why Brad Ziegler is the team’s closer. Ziegler had a 4.79 ERA last season and has a 9.82 ERA though 3.2 innings thus far this season. Barraclough will be the Marlins closer sooner or later. YTD stats: 3 innings, 0 holds, 5 strikeouts, 0.00 ERA.

A new section for this season; this will simply provide the current top-5 closers in saves, strikeouts, ERA, and WHIP.

*More data is needed for this. Table will be started April 19 and be available every week following*

B. Buxton - CF
MIN
Byron Buxton (family) has arrived in Minneapolis and is being processed through MLB's intake testing protocol.
Buxton was excused from the first weekend of summer camp following the arrival of his second child on Friday. His coronavirus test results should be ready around the middle of the week, and if he's in the clear, he'll be given the go-ahead to join the workouts happening at Target Field. The 26-year-old played well last season when healthy and could be a highly valuable multi-category producer in MLB's planned 60-game sprint.
Added 10:01 pm (EST)
Added 10:01 pm (EST)

J. Guerra - RP
ARI
Junior Guerra has tested positive for COVID-19, Diamondbacks manager Torey Lovullo announced Sunday.
Silvino Bracho also tested positive. Guerra was signed to a one-year, $2.55 million free agent contract in December and could be a valuable bullpen piece for Arizona in this condensed campaign given his ability to work multiple innings in relief. He had a 3.55 ERA, 1.12 WHIP, and 77/36 K/BB ratio in 83 2/3 innings (72 appearances) last season with the Brewers. The 35-year-old right-hander will be put in quarantine and must pass two consecutive COVID-19 tests before he is allowed to return to the D-backs.
Added 9:49 pm (EST)
Added 9:49 pm (EST)

A. Heaney - SP
LAA
Angels manager Joe Maddon confirmed Sunday that Andrew Heaney is locked in as the team's Opening Day starter.
It will be the first career Opening Day start for Heaney, who struck out 118 batters over 95 1/3 innings last season and spent the shutdown period working further and further away from the elbow and shoulder issues that have recently plagued him. He's a worthy mid-to-late round pick in fantasy drafts this summer.
Added 9:23 pm (EST)
Added 9:23 pm (EST)

K. Yates - RP
SD
Kirby Yates is expected to do his intake testing on Monday and Tuesday.
And if he's clear of COVID-19, he could participate in his first summer camp workout on Wednesday. Yates was late arriving to camp due to a positive diagnosis within his family. The 33-year-old right-hander should be among the first relievers off the board in summertime fantasy drafts after posting a 1.19 ERA and 101/13 K/BB ratio over 60 2/3 innings least season while leading all MLB closers in saves with 41.
Added 9:19 pm (EST)
Added 9:19 pm (EST)

S. Bracho - RP
ARI
Diamondbacks manager Torey Lovullo announced Sunday that Silvino Bracho and Junior Guerra have tested positive for COVID-19.
It's unclear whether the cases were diagnosed through MLB's intake testing protocol or before. Either way, the two pitchers will be absent from summer camp workouts until they pass consecutive COVID-19 tests. Bracho suffered a recent setback in his recovery from Tommy John surgery, so it's unclear how much he is able to do at the moment anyway. Guerra signed a one-year, $2.55 million deal with Arizona in December.
Added 9:11 pm (EST)
Added 9:11 pm (EST)

F. Perez - SP
DET
Tigers RHP prospect Franklin Perez (shoulder) threw a bullpen session this weekend at Tigers summer camp.
Perez resumed working from a mound in February after taking several months off to a heal a shoulder issue, and it looks like he should be able to pitch in instraquad games at some point this summer. The 22-year-old was included in the Tigers' initial player pool, but it's unclear whether he'll see any actual MLB action.
Added 8:53 pm (EST)
Added 8:53 pm (EST)

F. Mejía - C
SD
AJ Cassavell of MLB.com writes that Francisco Mejia has "looked sharp" in the Padres' first two instraquad games.
Mejia went 0-for-15 in the Cactus League this spring, but it's always been silly to draw any conclusions from spring training numbers. The 24-year-old former top prospect would seem to be a good option for the Padres at DH and should get a boost in fantasy value with the addition of that role to the National League scene. He's a sneaky post-hype breakout candidate heading into MLB's planned 60-game 2020 campaign.
Added 8:28 pm (EST)
Added 8:28 pm (EST)

K. Lewis - LF
SEA
Mariners manager Scott Servais praised Kyle Lewis' physical condition during a Zoom call with reporters on Sunday.
Lewis finally put his knee issues in the rearview last season and in September delivered an .885 OPS with five home runs over his first 18 major league games. He used the shutdown to work with private hitting, speed, and strength coaches. “Coming back from a very serious knee injury, it takes time,” Servais said. “You might be physically strong and everything checks out, but it’s always in the back of your head. That’s what it looks like to me, that it’s kind of freed him up now. ... The ceiling, the upside for Kyle, the sky is the limit."
Added 8:10 pm (EST)
Added 8:10 pm (EST)