James Grande breaks down the top plays and values for your KBO DFS lineup builds. 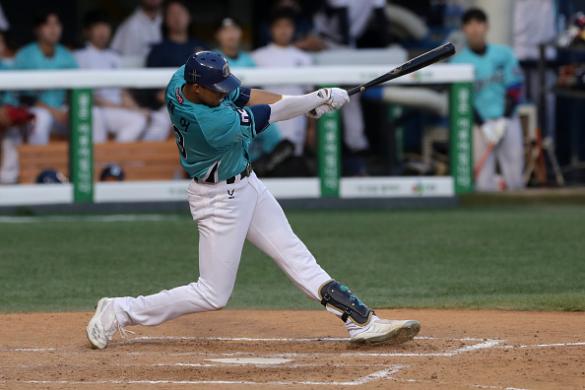 I guess Koo is human? He had his worst start by a mile his last time out allowing more than a run for the first time this season, but he’ll look to get back on track against the Lotte Giants here. Koo is a MASSIVE -355 favorite, the biggest on the slate. Despite the poor start, his ERA is a sparkling 1.37, which leads the league, and has 65 K’s which is also a tie for the league lead. He’s a lock-and-load in cash games and honestly, any format you’d like.

Talk about a GPP option. Cha is so up and down, with his recent start being really solid throwing six scoreless innings while allowing just one measly hit. Cha has five 20+ DK point games out of nine starts this year and three times he’s put up LESS than THREE DK points, so it’s such a mixed bag. He’s a -132 favorite and the 9.5 O/U is the second lowest on the board. Do yourself a favor and do not deploy him in cash.

If you’re looking for someone to pair with Chang Mo Koo in cash games, look no further than Im. Im has now fired eight straight starts in which he’s allowed three earned runs or fewer and has put up double-digit DK points in each of those outings. He gets to face off against Hanwha who is second to last in batting average and dead last in home runs, presenting little to no problem for opposing pitching. Im is a great play for all formats here.

I like both pitchers in this game quite a bit but Moon slightly more. He has thrown back-to-back scoreless outings and has allowed two ER or fewer in five straight starts. He;s been excellent in the strikeout department as well punching out 7+ batters in 4-of-5 starts. This game has the lowest O/U on the slate and SK are the underdogs so we could possibly be getting Moon at a cheaper ownership percentage than he should be.

We want the lefties here as Shi Hwan Jang has allowed them to hit a robust .381 and has allowed three bombs already this season. Tucker is one of the most elite hitters the KBO has to offer as he’s slashed .324/.397/.601 up to this point in the season. Do you want to pay the premium? That is ultimately the question.

First off, I love the multi-position eligibility out of Choi but he’s a left-handed swinger and that's what we want against Shi Hwan Jang. Choi has had a long history of success in the KBO as he’s hit 14+ HR and driven in 70+ runs in every season since 2008. He’s also hit .327 with 5 HR this season vs. RHP.

Yoo continues to be a productive hitters for KIA as his average sits at .337 for the campaign. We get the lefty-righty draw we’re looking for here and RHP are where Yoo has done most of his damage belting all three of his homers against them. He is not an elite power hitter by any stretch, but given the fact this is his first sample of an everyday player, he’s showing he has pop.

We haven’t gotten the best version of Yoo lately, but he’s been a productive hitter on the year and has 31 RBI which is near the top of the leaderboards for catchers. Je Seong Bae, KTW pitcher, has had a TON of batted ball luck go his way posting a .285 BABIP but his FIP is nearly two runs higher than his ERA, so that luck will eventually run out. My guess is it runs out here against LG and Yoo.

His ability to steal a base is the most intriguing prospect of Oh’s game. He has nine stolen bags this year ranking him near the top of the league leaders. He’s just a .260 hitter on the year but has hits in 9-of-10 games which increases the likelihood of another SB if he continues to reach safely.

I’m not sure how LOT plans on stopping the Dinos in this spot. Nobody has stopped Altherr recently anyways homering in three straight games and four times over his last six. He hits homers (13) and can steal bags as well (8). Let’s not forget he gets a righty-lefty match-up as well. Altherr is batting .412 with seven homers in just 34 at-bats vs. LHP. He’s a lock-and-load in all formats.

At only 2.4K Kwon is one of the better values of the slate. He gets the split advantage here and he, like Aaron Altherr, has homered in three straight games. Because of his recent play, Kwon has upped his slash to .325/.438/.575 on the year.

With Eui Yi Jang leaving Tuesday’s game, we could see Kim draw a start here and he makes for a really strong value. He’s 2.1K and on the year he’s hit .327 with an OPS of .914 and that’s in a pretty big sample size of 49 at-bats.

Another Doosan lefty we can use here. Especially considering he’s under 4K and has been swinging a hot bat. 4-of-6 of his homers have come against right-handed pitching and he’s also hitting .347 against them. The 10.5 O/U is the highest total on the board.

I repeat myself every slate when it comes to Hur, but we need to look at the landscape of 3B because it’s horrible. Hur is so cheap and is hitting .316 with an .829 OPS on the year. He has some power and some speed, so he can contribute in multiple categories.

Someone we used OFTEN earlier in the year has begun to turn it around at the dish. Seo has hit .306 over his last 10 games. He’s up to 11 stolen bases on the year and has reached base in 5-of-6 games. He’s .405 OBP this year is a huge deal considering his elite ability to swipe a bag, even two.

We want the left-handed swingers against Young Ha Lee and we have a cheap one here in Kim. He’s been swinging a great bat hitting .333 with hits in 9-of-10 games. After his steal on Tuesday he’s up to five on the year and also has five bombs. He’s multi-position eligible and also a dual threat. Hard to beat at 2.7K.

Despite the fact I really like Seung Won Moon here, 3B is depleted and Lee has been pretty good this year. He’s been a strong run producer as he’s up to 32 runs driven in across 39 games. He homered on Tuesday and now has hits in three straight and in 5-of-6 games.

Although we do have two right-handed batters on the list, we should really focus on the left-handed hitters against Hanwha starter Shi Hwan Jang. Jang has allowed LHH to bat .381 while giving up three of his five bombs against him. KIA are massive -295 favorites in a 9.5 O/U and have three lefties in Tucker, Choi & Yoo that are all swinging hot bats. A full KIA stack is definitely a strong one.

So the Lotte Giants are starting a guy who allowed 10 hits and 5 ER across 3 IP in his first start this season and that same pitcher hasn’t had an ERA south of 5.61 since 2014. He gets the task of facing off against the BEST team and offense in the KBO. Joy! For us, however, it’s a win. The Dinos are priced nicely for us to stack and we have to take full advantage of the situation we have in front of us.

R. McMahon - 2B
COL1
Ryan McMahon swatted a three-run home run on Wednesday against the Diamondbacks.
McMahon's opposite-field shot in the fourth inning gave the Rockies the lead at the time. He also added a single. It's the first multi-hit game this month for McMahon.
Added 7:53 pm (EST)
Added 7:53 pm (EST)