James Grande tells you which starting running backs won't be starting midway through the season and which backup(s) you should be looking at in your drafts. 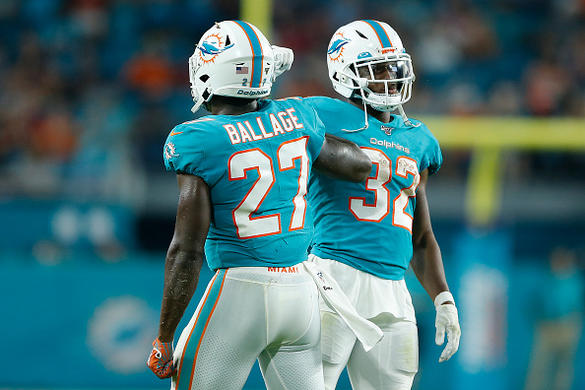 In this week’s running back positional piece, it’s all about the guys who likely start second and maybe even third on the depth chart that take over at some point during the year and become the go-to three-down back, if that really even exists anymore. At the end of each potential changing of the guard, we’ll put out a verdict whether or not we believe the backup(s) do in fact take over at some point this season.

It’s understood by now that they’re listed as co-starters, but who before the season suspected Ballage would be getting first-team reps as soon as camp began? Not many people. Ballage has impressed in camp and even saw a goal-line carry and scored in the teams first preseason game. Drake is a great pass catcher, so he’ll have a role with this offense, but the Dolphins new coaching staff -- and old one too -- sure believe that he’s not a three-down back and nobody can deny that.

Verdict: Drake has PPR value, but there is a reason why he hasn’t seen more than 133 carries in any of his first three seasons. Ballage doubles Drake’s rushing attempts this season and ends as the Dolphins RB1.

This Buffalo backfield could look completely different by the time camp ends. Will McCoy not only be the starter, but will he even be on the Bills? How long before Frank Gore is using a walker from the sidelines to the huddle? All signs point to their impressive rookie because what does Buffalo have to lose? Sure using Gore and McCoy at the early stages of the year to help Josh Allen grow and develop could be beneficial, but in the latter stages of the season when New England is six games up in the division, why not see what Singletary has to offer as a featured back?

Verdict: If McCoy opens the season the starter, he’s nothing more than an RB3/FLEX option, but the best value on this team will be Devin Singletary for the long term.

Out of left field, Andy Reid came out and said the Chiefs will operate in a running back by committee backfield. Damien Williams will likely get the first crack at things, but he’s definitely not the most skilled player of the three. Williams has been in the league for five years and hasn’t seen more than 50 carries in any regular season yet. Carlos Hyde , his backup, will be 29 in September and has completed only one 16-game season in the five years he’s been in the league. The darling of this backfield is the 5’8” rookie they drafted in the sixth-round, Darwin Thompson. We saw how electric he can be out of the backfield catching a 29-yard touchdown pass in the Chiefs first preseason game.

Verdict: Williams and Hyde dominate the carries early on, but Thompson takes over as the featured back after their Week 12 bye week. Maybe even a couple of weeks sooner.

This is obviously contingent on Melvin Gordon ’s status, but we’re kind of moving on from him playing in San Diego again ala Le’Veon Bell’s situation last season. With Gordon out the picture, Austin Ekeler is the expected starter and Ekeler has had two very strong seasons on his resume. That being said, his production had a lot to do with Melvin Gordon being in the lineup and without him last year, he was a mediocre runner. That’s partially the reason why being bullish on Jackson is seemingly a popular approach this offseason. He rushed for 5,440 yards in college and was quite electric year in and year out. Ironic he ended up on the Lightning Bolts.

Verdict: Gordon holds out for the entire season or he’s traded. Ekeler opens up as the starter but after the team realizes he’s not a primary back, Jackson takes over. It’ll happen sooner than we think. That’s how electric Jackson is and can be.

This seems to be a foregone conclusion that if Howard opens the season as the starter, it’s only a matter of time before Sanders takes over. People are deeming Sanders the second coming of Saquon Barkley all because they both went to Penn State. Howard has definitely been a workhorse since coming into the league notching three straight seasons of 250-plus carries but his career-worst 3.7 YPC came last season. In his first full season at Penn State, Sanders averaged 5.8 YPC and showed great hands out of the backfield catching 24 balls as well.

Verdict: This is Miles Sanders backfield that Jordan Howard is just place holding for now. Darren Sproles will also play in passing downs, but his impact will be minimal for fantasy purposes unless your league drafts only players under six feet.

This backfield is a whole mess right about now and there are a ton of different scenarios that could play out. Their current third-string back, Matt Breida , averaged 5.3 YPC and notched over 1,000 yards from scrimmage in only 14 games last season. That’s the third-stringer? Well, Jerick McKinnon signed a four-year deal that he was given $18M guaranteed, but he’s still not fully recovered from last year’s ACL tear. Tevin Coleman is so familiar with Kyle Shanahan’s system considering the two were paired up in Atlanta, making him the clubhouse leader right now.

Verdict: If McKinnon is not ready to go come Week 1, Coleman and Breida will likely split three downs, with Coleman taking on the bulk of it. With McKinnon being the back San Fran invested the most money into, he’ll be the guy fantasy owners want when he does in fact return to full health.

R. Mostert - RB
SF
Raheem Mostert requested a trade from the 49ers.
It's one of the only leverage points he has over the 49ers right now as he looks to increase his salary up from $3 million. Mostert was the most efficient back in San Francisco last season and ultimately took over playoff games during the 49ers' Super Bowl run. His agent, Brett Tessler, notes that Mostert's contract was negotiated when he was just a core special teamer, not when he was entrenched as the 49ers' Week 1 projected starter. A trade is possible, but it would make sense for both parties to reach an agreement on a slight pay bump before the season begins. It seems helpful to be a running back in Kyle Shanahan's scheme, but what do we know. If Mostert is ultimately traded, Tevin Coleman's average draft position (RB43) would be a complete smash for fantasy football. It's also worth noting Jerick McKinnon (ACL) has yet to resume cutting.
Added 5:08 pm (EST)
Added 5:08 pm (EST)

Q. Watkins - WR
PHI
Eagles signed sixth-round WR Quez Watkins to a four-year contract.
Watkins was the final addition to the Eagles receiver group this offseason who offers a vertical playmaking skillset, joining Jalen Reagor, Marquise Goodwin and others. Watkins recorded 13 receptions of 20-plus yards last season, good for 17th among FBS receivers, and averaged a ridiculous 18.6 yards per reception. It will be difficult for him to find an early-season role, and Watkins could wind up on the practice squad.
Added 2:35 pm (EST)
Added 2:35 pm (EST)

D. Henry - RB
TEN
The Titans are open to signing a new deal with franchise-tagged RB Derrick Henry prior to the July 15 deadline, but "no extension is on the verge of happening," according to Titans Insider Terry McCormick.
As of now, Henry will be playing on the $10.278 million franchise tag after rushing for over 1,500 yards and 16 touchdowns last season. McCormick reports Titans GM Jon Robinson and Cap Specialist Vin Marino continue to discuss long-term possibilities with Henry. The Titan's top back has already signed his tender, so he will be on the field in 2020 if an extension is agreed to or not.
Added 12:53 pm (EST)
Added 12:53 pm (EST)

J. Clowney - DL
SEA
Following the restructuring of DE Olivier Vernon's contract, a source told Pro Football Talk's Mike Florio that the Browns are likely ending their pursuit of free agent Jadeveon Clowney.
The Browns were among teams linked to Clowney throughout the offseason, joining the Titans, Raiders and the Seahawks. In fact, a report from beat writer Mary Kay Cabot claimed back in June that Cleveland "hadn't given up on" the idea of adding Clowney to their roster. There was previously very little guaranteed money tied to Vernon, but the re-work in his deal now adds over $10 million in guarantees. By their actions, the Browns are telling the public they are out of this race. The wavering status of training camp likely continues to delay Clowney's signing.
Added 11:42 am (EST)
Added 11:42 am (EST)

D. Irving - DL
DAL
Suspended DL David Irving is working to get back into the NFL.
Irving, who last played for the Cowboys in 2018, missed the 2019 season after being suspended for repeated violations of the league's substance abuse policy - including multiple missed drug tests. In March of 2019, Irving proclaimed he "quit" football. That has seemingly changed, as his representation contacted Jay Glazer, who helped Aldon Smith in his recovery and build a path back to the NFL. Irving will be 27 years old in August.
Added 10:01 am (EST)
Added 10:01 am (EST)

J. Hurd - WR
SF
49ers WR Jalen Hurd is expected to play the "big slot" role this season.
Per beat writer David Lombardi, the 49ers strive for "position-less" football, and Hurd might be the prime example. The former Vols running back could handle a couple carries per game, catch passes over the middle of the field, or use his 6-foot-4 inch frame to block on the edge -  likely busting common personnel groupings defenses match-up against. If Hurd is the "big slot," that makes Trent Taylor the "small slot." Both are coming off injuries that forced them to miss the entire 2019 season.
Added 9:43 am (EST)
Added 9:43 am (EST)