After all the NFL Week 1 games are complete, James Grande takes a look at some players whose stock may be rising or falling as we look ahead to Week 2. 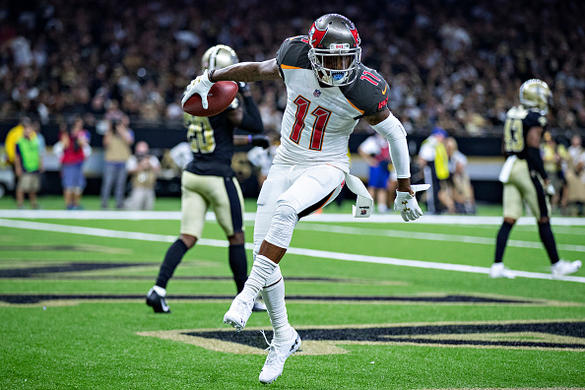 NFL Week 1 is in the books and we saw some absolutely spectacular performances and quite a few duds as well. Fantasy football owners can be an incredibly fickle bunch and while we don't like to endorse giving up on a player after just one week, we are, at least, able to evaluate whose fantasy stock is on the rise and whose might be going in the tank. Here's a look at some of the players we're watching this week:

DeSean Jackson , TB WR - The one thing that Ryan Fitzpatrick and DeSean Jackson have in common is verticality. Jackson likes to run right down the field while Fitzpatrick likes to throw it as far as he can. Jackson saw five targets come his way, catching all of them for 146 yards and two scores. Chris Godwin had all of the preseason hype coming into the year as the Bucs number two receiver, but Jackson is still the vertical threat he’s always been. It is definitely worth noting that Jameis Winston isn’t guaranteed anything when he returns to the football field, especially if Ryan Fitzpatrick can continue playing the way he has. If Fitzpatrick continues quarterbacking for Tampa Bay, Jackson has serious FLEX upside going forward.

Patrick Mahomes , KC QB - I could have gone with an option in Ryan Fitzpatrick that everyone is seemingly going to go with, but Mahomes was very impressive in his 2018 debut. He squared off -- and torched -- a Chargers defense that allowed the fourth fewest yards against quarterbacks last year. Mahomes threw four touchdowns and 258 yards. He only rushed for 21 yards as well, which is another aspect of his game that he’s really good at. When that is added to the repertoire, he’s going to be an elite option in all fantasy leagues.

Austin Ekeler , SD RB - For deeper fantasy leagues, Austin Ekeler is a really, really intriguing waiver wire option. He was only on the field for 27-percent of the Chargers snaps, but he has 126 yards from scrimmage (87 receiving, 39 rushing). Ekeler also scored, which obviously an added bonus in any league. Ekeler is an excellent pass catcher and should be looked at in PPR formats with 14-teams or more. We should continue to monitor his snap count each week because if it rises, the more valuable in ALL fantasy leagues he becomes.

Quincy Enunwa , NYJ WR - After a breakout 2016 campaign that saw him snag 58 passes for 800-plus yards, it was sad to see Enunwa go down with a scary season-ending neck injury in ‘17. But the past is the past for a reason, right? Enunwa was rookie quarterback Sam Darnold ’s absolute favorite receiver in Week 1 securing six catches on 10 targets for 63 yards and a touchdown. No other Jets receiver saw more than three targets come their way. Now, is he a must add? No. But that said, until Jermaine Kearse comes back he’s a serious WR3/Flex position option. Even when Kearse does return, who knows if Enunwa’s role will even take a hit.

LeSean McCoy , BUF RB - His stock has really been plummeting all offseason, but it’s done nothing but bottom out after that Week 1 performance. The Bills are a very bad team and it doesn’t seem like they’re going to be in many games. The more games they fall behind in, the more likely they are to go away from the run and throw more. It’s understood that Baltimore blew them out, but McCoy only carried the ball seven times and picked up just 22 yards. This is someone that fantasy owners wasted a second or third-round pick on. If you have McCoy, and we know it’s early, but you might want to look to move him at your earliest convenience.

Josh Gordon , CLE WR - While a lot of people sit there and wait for Josh Gordon to revert back to the receiver we saw back in 2013, but that was five years ago. Gordon is very talented and that isn’t in question, but it’s everything else surrounding the Browns offense. TyRod Taylor isn’t someone we consider a volume passer. The Buffalo Bills two leading receivers last year were Charles Clay and LeSean McCoy and neither of them caught 60 passes. The Browns have a lot of weapons, Jarvis Landry , Duke Johnson , David Njoku and Antonio Calloway all are competing for targets. I just don’t see his clear cut role with this offense, which was evident after his three target, one catch outing in Week 1.

Dak Prescott , DAL QB - It’s like fantasy owners have been drafting Prescott as a QB1 with much regularity, but if Week 1 gave us a peek into the future, he’s going to be lucky to even be considered as someone you’d want to stream with or pickup as a bye week backup. Prescott’s weaponry aka his wide receiver corps is depleted. Outside of Cole Beasley , no other Dallas pass catcher had more than five targets. Allen Hurns who was brought in to be a starter made one catch, rookie Michael Gallup had one target and Terrance Williams , the veteran number one the Cowboys were relying on could only get enough separation to have two passes thrown his way. Prescott threw for just 170 yards and the Cowboy offense only scraped up eight points. This could be a long year for Prescott and the passing game if nobody steps up soon.