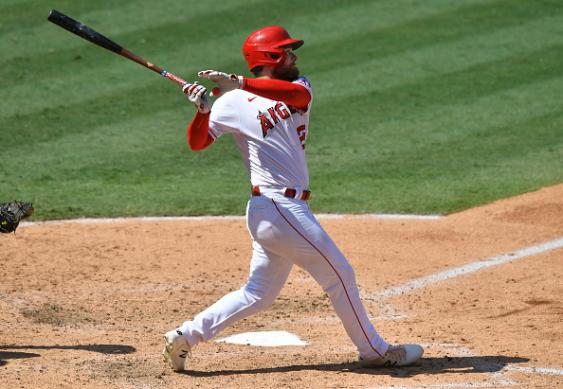 Deivi García (NYY – SP) If there was ever a model of consistency across starting pitchers right now, it would appear to be Deivi García. In four straight starts, including Tuesday’s victory over Toronto, Garcia has delivered exactly six strikeouts. As a starter this season he now has 24 strikeouts in 24.2 innings with five walks, and nine earned runs. It is worth mentioning that all nine earned runs and four home runs allowed have occurred within the last three outings. Given the nature of the MLB schedule, Garcia would’ve been a better add prior to Tuesday’s start since he now only has two left. But his remaining two starts come against Boston (on Sunday) and Miami (next Friday).

Jared Walsh (LAA – 1B) The Angels have a shiny new toy at first base and his name is Jared Walsh . Entering Tuesday night’s contest, Walsh had been slashing .389/.400/.917 in the month of September with multiple hits in five of his last six games with four home runs in that span. How did he do on Tuesday? He filled the stat sheet with a crisp 3-for-5 night with a home run, two doubles, two runs scored, and three RBI. He’s somehow still available in a vast majority of ESPN leagues and with a little over a week-and-a-half remaining this season, it would be in your best interest to get him on your roster.

Cole Hamels (ATL – SP) This may be a bit of a bold suggestion because the Atlanta Journal Constitution, and other media outlets, have acknowledged that Hamels may only throw 55-60 pitches in his Wednesday debut with Atlanta. But the start against the Orioles is tempting, and if it goes well then I’d say he’s in play next week with a pair of matchups lined up against the Red Sox and then the Marlins. If you play in a league that limits the numbers of starts each week, then I’d avoid Hamels. But he’s absolutely worth having on your radar for two starts next week for your championship. His performance on Wednesday is key. Another pitcher worth keeping an eye on in a similar situation to Hamels is Caleb Smith . Smith made his return last Friday and only pitched three innings. But he gets a start later tonight against the Halos with two starts next week against the Rangers and Rockies, both of which are at home.

Chris Taylor (LAD – OF, SS, 2B) If only there was a spot for him at the top of the order, his ownership would be much higher. But even hitting in the middle of the lineup, or sometimes in the bottom half, Taylor’s still been very productive and fairly consistent in this brief season. In the month of September he’s hitting .349 with a .674 slugging percentage. In 12 games this month he has 16 hits, 11 runs scored, and 14 RBI. These aren’t the sexiest numbers that we’ve seen from Adam Duvall , Bobby Dalbec, or even Jared Walsh but these are reliable numbers that can aid in head-to-head category or rotisserie formats.

Jesús Aguilar (MIA – 1B) I don’t really like Aguilar as much as most of the analysts in the industry, but I cannot argue against the fact that he’s reduced his strikeout rate in previous years, including 2020. Coming into Tuesday night’s game against Boston he was 6-for-12 in his last three games with a double in each contest. He went 0-for-4 on Tuesday, but Wednesday’s matchup draws an opportunity against Mike Kickham who has allowed three home runs in nine innings of work for Boston this year. We’ve seen offenses take advantage of Boston pitching and the Marlins can bounce back in this spot after getting shut out on Tuesday.

Maikel Franco (KC – 3B) I feel like I mentioned Franco either last Wednesday or in Saturday’s piece, but he’s been worth the pickup once again. He went 0-for-2 with a strikeout on Tuesday, but he salvaged the night with a pair of walks. Prior to that he had collected 16 hits in nine games dating back to September 5th with 12 RBI in that span. The raw home run power has been sporadic, but he’s been a valuable addition off waivers and his strikeout numbers haven’t been terrible lately.

Daniel Vogelbach (MIL – 1B) I think Vogelbach is worth mentioning for deeper leagues and maybe even 12-team formats as well. Following his cup of coffee with Toronto, Vogelbach landed with the Brewers and was hitting over .400 with the Brew Crew with his brief time with them, but the power wasn’t there… yet. On Tuesday he went 3-for-4 with a home run, four RBI, and three runs scored. The Brewers have a double-header on Wednesday and finish out the weekend at Miller Park before going on the road next week. I’d say he’s worth a roster spot for the homestand and based on how he does he might be worth hanging on to for the series next week in Cincinnati and St. Louis.

Kwang-hyun Kim (STL – SP, RP) Kim’s an interesting guy this week. He started the season as the Cardinals’ closer, then got hurt, then came back and was looking solid as a starter, got hurt again, then came back on Monday and was pretty dominant in his start in Milwaukee. As a starter he’s tossed 27.2 innings and allowed just one earned run. That’s no typo. The earned run was also a solo home run almost a month ago as well. He’s allowed just one unearned run in his last four starts. He doesn’t dominate with strikeouts, but he can aid in ERA and his WHIP hovers right around 1.00. He may be in line for some regression considering his 3.42 FIP and 4.77 xFIP compared to an ERA of 0.33 as a starting pitcher. The Cardinals still have four double-headers between now and the end of the season since they lost so many games earlier in the year, and Kim is lined up for a road start against the Pirates on Saturday and then a home matchup against Milwaukee next week.

Willi Castro (DET – SS, 3B) Castro was mentioned not too long ago in the waiver column, but he deserves another shoutout. Here’s another hitter that’s just swinging a hot stick. Heading into Tuesday’s slate of games he was hitting .353 this month and he continued that run on Tuesday night as he went 3-for-5 with a home run and two runs scored. He offers some position flexibility in the infield and you can slot him in as a corner infielder or middle infielder as well. For a good stretch he was locked into the fifth spot in the lineup, but it’s worth mentioning that on Sunday and Tuesday he moved up to second. So, if he can maintain the hot bat and get on base we could see him put more runs on the board.

MLB Report: Mets agree to contract with Trevor May

MLB Pham had surgery to repair torn cartilage in wrist

I. Kiner-Falefa - 3B
TEX1
Evan Grant of the Dallas Morning News reports that the Rangers plan to have Isiah Kiner-Falefa replace Elvis Andrus as the team's starting shortstop next season.
It's a big decision, though not completely out of left field given that the team was looking toward the future late in the 2020 season. Of course, Kiner-Falefa just won his first Gold Glove Award for his defense at third base. This would be a new test for him, though the Rangers could keep their options open with a talented field of shortstops hitting free agency next offseason. Moving off third base would also open the door for prospect Josh Jung to make his debut at some point in 2021. As for the 32-year-old Andrus, he still has two years and $24 million remaining on his contract. It's going to be tough to trade him unless the Rangers kick in some cash and a deal would also require Andrus' approval. He might end up as a very expensive backup infielder.
Added 2:41 pm (EST)
Added 2:41 pm (EST)

T. May - RP
MIN1
Andy Martino of SNY.tv reports that the Mets have signed free agent reliever Trevor May, pending a physical.
No word yet on the terms involved. Anthony DiComo of MLB.com first mentioned that the two sides were closing in on a deal. The 31-year-old May holds a 3.19 ERA with 12.2 K/9 in 113 appearances over the past three seasons, so he should only help the Mets' bullpen going into 2021. He figures to serve in a set-up role in front of closer Edwin Diaz.
Added 1:26 pm (EST)
Added 1:26 pm (EST)

T. May - RP
MIN1
Anthony DiComo of MLB.com reports that the Mets are "deep in talks" with free agent reliever Trevor May.
DiComo cautions that it's "not a done deal, but there is smoke." May has a connection with Mets pitching coach Jeremy Hefner, who previously worked as assistant pitching coach with the Twins. The 31-year-old has been a quality late-inning arm since returning from Tommy John surgery, including a 3.86 ERA and 38/7 K/BB ratio over 23 1/3 innings this past season. He's one of the better relief arms on the market.
Added 1:11 pm (EST)
Added 1:11 pm (EST)

C. Hill - RP
CLE
Cam Hill underwent right wrist surgery following a traffic accident on Monday in Tulsa, Oklahoma.
Hill suffered an injury to the lunate bone, which is located in the mid-carpal joint. There's no information yet on a timeline for his recovery. The 26-year-old posted a 4.91 ERA and 16/5 K/BB ratio over 18 1/3 innings out of the Indians' bullpen this past season.
Added 11:53 am (EST)
Added 11:53 am (EST)

W. Franco - SS
TB1
Rays prospect shortstop Wander Franco wrote on his Instagram on Tuesday that his visit to the doctor went well.
It's encouraging news. Franco recently traveled back to the United States after feeling right biceps discomfort in the Dominican Winter League, but it sounds like nothing alarming was found. In fact, he indicated that he could be back in action soon. Franco, 19, is widely considered the top prospect in the sport.
Added 11:25 am (EST)
Added 11:25 am (EST)

F. Peña - C
CIN
Athletics signed C Francisco Pena to a minor league contract.
He'll earn $600,000 if he makes the major league roster. The 31-year-old Pena hasn't appeared in the majors since 2018 with the Cardinals, but he'll give the Athletics some nice veteran depth going into spring training.
Added 11:20 am (EST)
Added 11:20 am (EST)

V. Guerrero Jr. - 1B
TOR1
Vladimir Guerrero Jr. has been granted permission to play with Leones del Escogido of the Dominican Winter League.
Guerrero could make his debut as soon as next week. The 21-year-old has been hard at work this offseason, saying in a recent interview that he lost 12 pounds since the end of the season. He's hoping to return to third base in 2021 after splitting time between first base and the DH spot this past season. The Blue Jays might not subscribe to that idea, but they are surely pleased to see that Vlad Jr. is motivated for the season ahead.
Added 10:44 am (EST)
Added 10:44 am (EST)

T. Pham - LF
SD1
Tommy Pham required surgery to repair a torn cartilage structure in his left wrist, reports Ken Rosenthal of The Athletic.
We knew about two previous surgeries. The first was a hamate bone surgery in his left hand in August and the second was due to a stab wound he suffered outside of a strip club in October. This newly-disclosed procedure -- as reported in Ken Rosenthal's latest notes column at The Athletic -- addressed a lingering issue on the small finger side of his left wrist. The good news is that his grip strength has improved and that he's already lifting weights and running, but the series of procedures will undoubtedly be a factor in whether the Padres decide to tender him a contract by Wednesday's deadline. MLB Trade Rumors projects him to make around $8 million in his final year of arbitration.
Added 9:25 am (EST)
Added 9:25 am (EST)