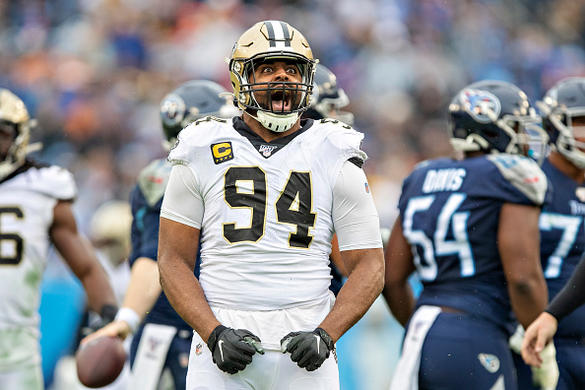 We are less than 100 days from the start of the NFL season and the NFL Draft Guide content will be rolling out as we dive deeper into the Summer of Quarantine. So far we’ve previewed D/ST’s on the rise, D/ST’s we should avoid, looked at the NFL schedule, etc. Now it’s time to look at a D/ST that we haven’t really talked about too much. Who really wants me to reiterate my love for the Chargers, Bucs, or Cardinals? Some of you are still going to reach for a D/ST earlier than recommended. It’s going to happen. So what about the Saints? They’ve largely been a Top 10 D/ST the last three seasons, but what is the ceiling for a team that lost Vonn Bell , Eli Apple , and A.J. Klein in the offseason? And how do they stack up against other teams in a vastly different NFC South?

The secondary did take a little bit of a hit with the departures of Eli Apple and Von Bell. Apple departs on a one-year deal to Carolina while Bell signed a three-year contract with Cincinnati. To replace Bell, the Saints are bringing Malcolm Jenkins back after he spent the last six seasons in Philly. Just a few years ago Jenkins was making back-to-back Pro Bowls so while he is getting up there in age, he can still contribute. Apple will be replaced by his former teammate from the Giants, Janoris Jenkins . The Panthers also lost A.J. Klein , who signed with the Bills back in March, but they can replace him with Alex Anzalone or Zach Baun. With the fresh faces in addition to Marshon Lattimore , Cameron Jordan , Demario Davis , Sheldon Rankins  (who should be back from his ankle injury), Marcus Williams , etc. they still have the pieces to be an elite D/ST in fantasy.

This could be what is keeping the fantasy community from ranking the Saints as a Top 5 D/ST compared to a Top 10-12 unit, which is where they mostly sit right now. The NFC South has built a reputation on touting some high-scoring offenses when you consider the Super Bowl runs the Panthers and Falcons went on not too long ago. The Saints, with Drew Brees , have had an explosive offense for over a decade, even as Brees has inched closer to retirement more recently. And the division has some new blood this year. The Bucs have Tom Brady as their new franchise quarterback and Rob Gronkowski is coming out of retirement to join him in Tampa. The Bucs old quarterback, Jameis Winston , is now Brees’ backup on the Saints. And Brees’ old backup, Teddy Bridgewater , is now the starting quarterback for the Carolina Panthers. Even the Falcons went out and added Todd Gurley . While the reputation of the NFC South will likely hold up, a few of these teams will have some fresh looks, and as good as this defense is they could still fall into some shootouts.

The six divisional games will be difficult. They will also have to host the Packers, 49ers, and Chiefs all in the Superdome. Those are tough matchups, but at least those games are all at home for New Orleans and we know how much the Saints value home-field advantage. Most of their non-divisional away games are pretty favorable:

Denver sticks out because it’s a loud stadium and the altitude is a tough transition. Philly could be a challenge if that offense stays healthy. The Week 2 matchup could also pose a challenge since it’ll be the Raiders’ first home game in Vegas debuting that stadium that moonlights as a Death Star. But it really isn’t a bad schedule. There are some tough divisional games, but I think the defense is returning a solid core to stand up and go 4-2 in this division en route to another NFC Championship. Last season the Saints totaled 24 sacks and 12 turnovers against their division rivals. They may not repeat the dozen turnovers considering Newton and Winston aren’t a part of the equation anymore, but I fully expect the Saints to frustrate the Falcons, Panthers, and even the Tom Brady -led Bucs. Overall from a fantasy standpoint, the Saints have a solid schedule.

Currently according to Fantasy Alarm’s early projections, the Saints are projected for 46 sacks, 25 forced turnovers, three defensive/special teams touchdowns, and they’ll give up about 23.6 points per game. And don’t be surprised if they allow about 350 total yards of offense per game. In 2019, the Saints allowed roughly 334.8 yards per game, so I’m giving them the benefit of the doubt a bit. I actually think the points allowed projection may be a little high. New Orleans allowed 341 total points last season, so per Fantasy Alarm’s current projections they would allow about 378. I think they have the pieces in place, and the schedule, to repeat the scoring and yardage numbers from a year ago, while they could also yield better results. We also have the Saints projected for the third-most sacks and the seventh-most forced turnovers. Those projections are reasonable. New Orleans could easily repeat a 50+ sack season with 25 forced turnovers. They won’t be gifted as many interceptions from Jameis Winston since he’s now on the team, but this secondary should be fine and the defensive line will still apply plenty of pressure.

Before providing a yes/no answer, it’s worth explaining how it isn’t as easy as a yes/no answer… “Oh way to go Malin, you built this D/ST up so much just to sit on the fence!” But it’s been discussed numerous times the values that can be had later on. And if you look at FantasyPros’ ADP, they have the Saints going off as the seventh D/ST, but Fantasy Football Calculator has the Saints going well outside the Top 10. And honestly, the Tampa Bay Buccaneers are being drafted outside the Top 12 as well and according to Fantasy Alarm’s projections they might lead the league in sacks and score six defensive touchdowns (a bit high) while only averaging 0.4 points allowed per game more than New Orleans. So the question remains, are the New Orleans Saints worth reaching for?

The reason I chose to write about the Saints is because they’re maybe one of two D/ST’s that’ll likely be drafted in the Top 10 at this position that I’d consider owning. Of course you have to love the Bills, Patriots, 49ers, Steelers, and Ravens, but not at their ADP. The Saints currently have a reasonable price tag whether it’s from the change in personnel, the different landscape of the NFC South, or simply owners expecting regression. I don’t think the Saints regress. They could be a Top 5 D/ST which means they could present value with a diminished ADP. However, we do need to be smart, and sure, I subscribe to the streaming D/ST theory. The Saints just simply aren’t worth the risk unless they fall to you with one of your last three or four picks depending on your league’s size. There are high upside options worth looking at following the Saints and you’ll be passing on late-round flyers by selecting a D/ST.

As much love as I can give the Saints, who are a bit underrated at the moment, you’re better suited to continue to wait and draft the position later. And as always, streaming is an option. I fully expect the Saints to average double-digit fantasy points heading into their Bye week, but they could regress in the second half of the season and a Week 15 matchup against the reigning Super Bowl Champions looms large over the fantasy football playoffs.