Mattison caught his lone target for four yards. Ameer Abdullah ran 12 routes and saw one target, while Mike Boone ran three routes and got one target. Mattison's role in the Minnesota offense without Dalvin Cook was more game script sensitive than many had assumed. Facing a big deficit for most of the game, the Vikings gave Mattison a meager ten rushes. He once again becomes a bench stash in 12 and 14-team leagues with Cook expected to be ready to go coming off the team's Week 7 bye week.
Added Yesterday 10:06 am (EST)
Added Yesterday 10:06 am (EST)

NFL Dolphins passing the torch to Tagovailoa in Week 8

NFL Kyler throws pair of TDs, runs for another in win 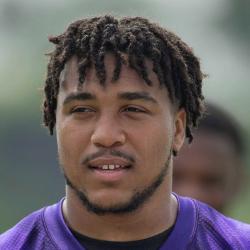 M. Sanders - RB
PHI1
Miles Sanders (knee) remained sidelined at Tuesday's practice.
Sanders is fully expected to sit when the Eagles host the Giants on Thursday evening, giving way to a Boston Scott-led committee, with Corey Clement operating as the No. 2 back. The fact that Sanders has yet to be formally ruled out bodes well for his Week 8 status.
Added 4:06 pm (EST)
Added 4:06 pm (EST)

A. Jeffery - WR
PHI1
Alshon Jeffery (foot) remained "limited" in Tuesday's practice.
Jeffery's status for Thursday evening's game against the Giants is unclear. If by some miracle Jeffery finally makes a 2020 appearance, he will be well off the fantasy radar, especially since DeSean Jackson (hamstring) is returning this week.
Added 4:04 pm (EST)
Added 4:04 pm (EST)

D. Jackson - WR
PHI1
DeSean Jackson (hamstring) remained "limited" in Tuesday's practice.
D-Jax is expected to suit up for the first time since Week 3 when the Eagles host the Giants on Thursday evening, but it would certainly be nice to see him get in a full session. Dealing with one injury after another since arriving in Philadelphia last year, it should not be assumed that D-Jax will immediately slide back into a high-snap, high-target role. He will need to prove his health before anything else. He should be ranked somewhere in the WR36-44 range for Week 7. The upside remains self evidence despite the equally obvious downside.
Added 4:01 pm (EST)
Added 4:01 pm (EST)

D. Slayton - WR
NYG1
Darius Slayton (foot) was "limited" for Tuesday's walk-through.
Slayton avoided setbacks against Washington. He should be ready to go for Thursday evening's suddenly massive divisional tilt with the Eagles. With Daniel Jones showing next to nothing as a passer, Slayton is limited to boom/bust WR3 status.
Added 3:48 pm (EST)
Added 3:48 pm (EST)

C. McCaffrey - RB
CAR1
NFL Network reports Christian McCaffrey (high-ankle sprain) will miss his fifth straight game in Week 7 but "has a shot" at returning for Week 8 vs. the Falcons.
That Week 8 game is a Thursday Night Football tilt, so it appears instead of trying to hurry CMC back for what would be two games in five days, the Panthers are trying to build him back to full strength for a divisional showdown. Although it sometimes feels like Mike Davis has barely missed a beat in McCaffrey's absence, he has been less efficient both as a runner and receiver. Getting CMC back will be a humongous boost for the surprisingly-competitive Panthers, as well as a game changer for the fantasy season stretch run. If you're rostering Davis, treat Sunday vs. the Saints as the last dance.
Added 3:38 pm (EST)
Added 3:38 pm (EST)

J. Burris - DB
CAR
Panthers placed S Juston Burris on injured reserve with a ribs issue.
A depth signing last spring, Burris has been an every-down player for the Panthers' surprisingly effective pass defense. He must now miss at least the next three weeks. The Panthers have been giving each of Burris, Tre Boston and Jeremy Chinn heavy snaps every week. UDFA Sam Franklin is the next man up.
Added 3:25 pm (EST)
Added 3:25 pm (EST)