Stephen Holder on Twitter
"Do I think Philip can still play? Absolutely," Ballard said at his season-ending Zoom. "He's going to take some time, and we're going to take some time. We'll meet again in about a month." Rivers was philosophical about his future following last Saturday's Wild Card loss, saying he is going to need some time. It's the first time Rivers has been anything other than gung-ho about continuing his marathon career. The 39-year-old is steadily losing effectiveness, though he remained an above-average starter in 2020. He probably has one more season of starting-quality play left in the tank. The Colts don't have a good backup plan.
Added Jan 14 1:51 pm (EST)
Added Jan 14 1:51 pm (EST)

A. Brown - WR
TEN1
A.J. Brown said he had surgery on both of his knees.
Brown claims that they believed his 2020 season was done after a Week 2 knee injury, but he managed to play through the pain. That makes his 70-1,075-11 receiving line across 14 games even more impressive. Brown simply is one of the best and most physical athletes at the position. It's unclear what surgeries he had -- his Week 2 injury was reportedly a bone bruise -- but he has months to get back to full health before training camp. With Corey Davis and Jonnu Smith headed for free agency, Brown will be in the WR1 conversation for 2021 fantasy drafts. He'll be 24 years old then.
Added 6:34 pm (EST)
Added 6:34 pm (EST)

Z. Moss - RB
BUF1
ESPN's Adam Schefter reports Zack Moss had "tight rope" ankle surgery.
This procedure was made famous with Tua Tagovailoa before the 2019 National Championship game. It will treat his high-ankle sprain. Schefter reports Moss is expected to be at full health for offseason workouts and training camp. As a rookie, Moss played ahead of Devin Singletary in obvious rushing downs. With both backs under contract for 2021, expect this to be a running back by committee, leaving both backs in no mans land. Moss belongs on the RB3/4 border ahead of 2021 fantasy drafts.
Added 6:06 pm (EST)
Added 6:06 pm (EST) 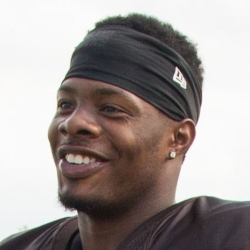 C. Coleman - WR
NYG
NFL suspended free agent WR Corey Coleman six games.
The reason is unknown, but six games is a PED-length suspension. Unable to make the Giants out of camp last fall, Coleman has not appeared in a regular season game since 2018. He tore his ACL in 2019. Although he is still only 26 years old, the No. 15 overall pick of the 2016 draft is at the end of the NFL line.
Added 4:53 pm (EST)
Added 4:53 pm (EST)

M. Ingram - RB
BAL1
Ravens waived RB Mark Ingram.
The abrupt ending to Ingram's Ravens tenure comes two seasons into his three-year deal. It is a highly unusual time of year for a team to release a veteran like Ingram. Even though he is subject to waivers, Ingram apparently cannot be claimed until after the Super Bowl. No one is going to pick him up at his scheduled $5 million salary. The move creates $5 million in 2021 salary cap space as the Ravens try to get ahead of what is going to be a reduced salary cap following this season's revenue shortfalls due to the COVID-19 pandemic. 31-year-old Ingram was a healthy scratch four of the Ravens' final five games, averaging a modest 4.2 yards per carry in the Ravens' road-paving rushing attack. Ingram probably still has some juice left in the tank, but J.K. Dobbins and Gus Edwards both offer more between the tackles at this stage of their careers.
Added 4:01 pm (EST)
Added 4:01 pm (EST) 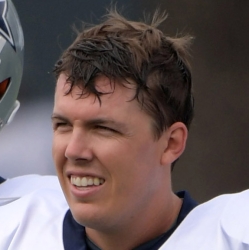 K. Moore - QB
DAL
Cowboys OC Kellen Moore will interview for the Eagles' head-coaching vacancy on Tuesday.
Moore is someone whose reputation in NFL circles is still outpacing what the public can see, not that he did a bad job under poor circumstances in 2020. The Cowboys and new coach Mike McCarthy thought enough of Moore in 2020 that they took the unusual step of retaining him even after ex-coach Jason Garrett was fired. They extended his contract earlier this month after Boise State tried to hire Moore as its new head coach. Although the Cowboys' sieve-like defense deserved most of the "credit," Moore's Dak Prescott-led offense was on a torrid pace before Prescott's brutal injury. Moore is only 31 years old. He would be a high-risk, high-reward hire for the Eagles.
Added 3:41 pm (EST)
Added 3:41 pm (EST)

J. Kelly - RB
CLE1
Browns signed RB John Kelly to a reserve/future contract.
The ex-Ram made zero 2020 regular season appearances after getting waived at final cuts in Los Angeles. Although he is still only 24, Kelly now has just 30 carries through three seasons after coming off the board at No. 176 overall in 2018. Cleveland is one of the places to be if you're a running back, but Kelly won't be a strong contender for No. 3 duties in 2021 behind Nick Chubb and Kareem Hunt.
Added 3:34 pm (EST)
Added 3:34 pm (EST)

P. Mahomes - QB
KC1
ESPN's Adam Schefter reports it is "too early to say that (Patrick Mahomes) will definitely will play" in the AFC Championship Game.
Schefter also confirms that Mahomes is dealing with a foot injury after he was limping around in the Divisional Round. The Chiefs have sent mixed messages on if they believe Mahomes was actually concussed against the Browns, but Schefter reports that is indeed the case. Per Schefter, Mahomes has already cleared some "big steps," but there are many more to go between now and Sunday. We know concussions are fickle, but it is a bit hard to believe Mahomes will not be out there against the Bills. Our first official update will come with Wednesday's injury report. Schefter reports Mahomes is expected to go tomorrow.
Added 3:13 pm (EST)
Added 3:13 pm (EST)

D. Lock - QB
DEN1
Broncos president of football operations John Elway said he remains high on Drew Lock, but that new GM George Paton "will continue to look to fill that spot if we don't think that Drew is that guy."
Elway called Lock's 2020 "essentially his rookie year," attributing his lack of development to various reasons, including the COVID-19 pandemic, young supporting cast and new offensive coordinator. For his part, Paton did not commit to Lock, but he did throw some bouquets his way. “I liked Drew coming out of the draft. A big arm, athletic, a play-maker,” Paton said. “I’ve watched enough tape to know that he’s talented. He can develop.” Lock's physical tools will always intrigue, while there is some truth to what Elway said. It's just hard to believe he is going to improve to the degree he needs to. Lock will have to make an even bigger leap than Josh Allen did when it comes to accuracy and decision-making. Allen's 2020 breakthrough was coming from a much higher baseline.
Added 1:55 pm (EST)
Added 1:55 pm (EST)