Tom Vecchio breaks down Tuesday's matchup between the Angels and Athletics to give you his take on what to watch for in this MLB contest on WinView Games. 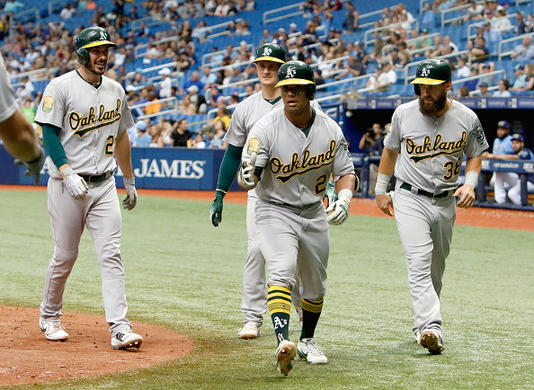 - The Angels are out of the playoff race and it has been showing, as they have lost three of their last four games, giving up five or more runs in those three losses.

- Those losses are coming from the fact their pitching is very average this season. They are 15th in ERA, 16th in WHIP, 13th in quality starts, and 15th in BAA.

- The hitting for Angels is also very average, as the bottom half of their lineup is rather weak. They are 13th in runs scored, 18th in batting average, and 17th in OBP and 12th in slugging percentage.

- Despite their offense being lackluster overall, Justin Upton is shining right now. He has home runs in three of his last four games, with four total home runs.

- Mike Trout continues to do his thing with four multi-hit games over his last eight, with three doubles and one home run.

- Tyler Skaggs will be on the mound for the Angels tonight, who will be making his first start off the DL since August 11th. Skaggs had given up 17 earned runs in his last two starts prior to going on the DL.

- Kole Calhoun had a home run in his most recent game, but that was his first hit in last six games.

- The Athletics are in the dead heat of the AL Wild Card race and in some nearly must-win games. They are just 1.5 games behind the Yankees for the first wild-card spot.

- Oakland has one of the better offenses in the league and comes in with the 5th most runs scored, 13th in batting average, 11th in OBP, and 3rd in slugging percentage.

- Oakland has been hit with some injuries in the pitching staff, but they are making it work with their bullpen and come in with some solid numbers. They are 5th in WHIP, 9th in ERA, 17th in quality starts, and 8th in BAA.

- Liam Hendriks is set to “start” the game for the Athletics, but he likely won’t pitch longer than one inning, as that has been the routine for him the last few times out.

- Khris Davis is doing his normal thing and going for the AL MVP. He has two home runs in his last three games, with hits in nine of his last 10.

- Matt Chapman has also been on fire lately, with hits in five of his last six games, with three doubles and one home run.

Since the odds on this one are even you can really go either way with your pick, but I’m siding with the Athletics. They are just the better team overall and in a spot where they need to win.

This game has an over-under set at 8.5, which is somewhat high for this being a pitcher’s park, but I said Skaggs is coming off the DL and hasn’t looked good before that.

This one is tough since he only has a 20% strikeout rate this season, but I want to go with YES since he has recorded one strikeout in three of his last four one inning starts.

I generally always side with NO on these types of props. Mostly due to the fact teams aren’t that aggressive with the first pitch, so I’ll stick with that.

K. Keller - RP
LAA
Angels optioned RHP Kyle Keller to their alternate training site.
Keller is heading down, and Angels manager Joe Maddon announced that the team will promote Julio Teheran on Wednesday to make his 2020 debut in a corresponding move.
Added 1:30 am (EST)
Added 1:30 am (EST)

D. Moore - LF
SEA
Dylan Moore went 2-for-4 with a homer and a double in a loss to the Angels on Tuesday.
Moore hit his second homer of the season with a shot off of Kenyon Middleton in the seventh. The utility player has performed well in his limited time with the Mariners this year; as seen in his .320 average and .680 slugging percentage. He's a decent DFS play when he is in the lineup against southpaws, but that's about it.
Added 12:54 am (EST)
Added 12:54 am (EST)

T. Buttrey - RP
LAA
Ty Buttrey fired 1 1/3 scoreless frames to pick up a save on Tuesday against the Mariners.
The Angels' bullpen has been a disaster this year, and while it did allow two runs on Tuesday, Buttrey was able to silence the Mariners' bats to pick up his first save of the season. The 27-year-old threw 11-of-16 pitches for strikes; nice to see from a pitcher that has struggled with command to begin 2020 and also was an issue in 2019. After this effort, it seems possible -- but not a lock -- that Buttrey gets more save chances going forward for the Angels.
Added 12:54 am (EST)
Added 12:54 am (EST)

J. Dunn - SP
SEA
Justin Dunn allowed three runs over four innings in a loss to the Angels on Tuesday.
This could have gone much worse. Dunn allowed a solo homer to Mike Trout and a two-run homer in the first, and he had no idea where his pitches were going early on; as seen in his four walks. Give the former top prospect credit, however, as he settled down very nicely and showed off the strikeout-stuff that makes him such an intriguing prospect. Still, until he improves his command -- significantly -- it’s going to be hard to trust him as a fantasy starter. Dunn squares off against the Rangers on Monday.
Added 12:54 am (EST)
Added 12:54 am (EST)

A. Heaney - SP
LAA1
Andrew Heaney allowed one run over 5 2/3 innings on Tuesday to pick up a victory over the Mariners.
Heaney did not have his best command on Tuesday, as he walked four and threw 52-of-87 pitches for strikes. Still, he was able to get the job done, with the only run coming across on an Austin Nola triple in the sixth. Pitching has been an issue for the Angels to begin the year, but Heaney has been effective with a 2.35 ERA over his first three starts. He’s scheduled to face the Athletics on Monday.
Added 12:53 am (EST)
Added 12:53 am (EST)