Tom Vecchio breaks down the NHL playoff match-up between the Predators and Jets to give you his best plays and what to watch for when playing in your WinView Games NHL contest. 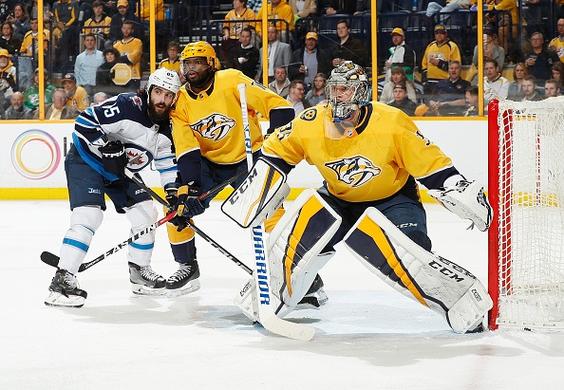 Round 2 is set to begin tonight and we have a fantastic matchup in front of us. It’s a shame this couldn’t have been the Western Conference Finals since we have two great teams in action. The Predators finished the season with 117 points, while the Jets ended with 114 points, which were first and second most in the league. This is going to be one hell of a series, and we should be in for no less than six games. If you love playoff hockey, strap in, because this one is going to be a wild one over the next two weeks. Both of these teams had an easier time in the first round, the Jets won in five games, while the Predators won in six games. Both teams are rested and will be ready to go for this one.

Mark Scheifele – He is their best offensive player and seeing time on the first forward line and the first power-play, so the ice time will be there for him to make an impact. Plenty of shots and production throughout the game makes him dangerous.

Dustin Byfuglien – led the team with 25 hits in the first-round, and he will continue to be a very physical player for the Jets, as he will need to be against this powerful Predators offense. He is also on the first power-play, so the offensive upside is there for him.

Connor Hellebuyck – He is giving up under two goals per game this postseason and had two shutouts in the first-round. This will be the biggest test of his young career, and the Vezina Trophy finalist has to prove why he should be considered among the elite netminders.

Pekka Rinne – Rinne gave up two or more goals in five of their six games in the first-round. That isn’t solid and will need to see a full team effort on defense to limit the scoring chances. He has to step up for them to keep this a close series.

Filip Forsberg – He was tied for the team lead in goals, a trend which should continue. He is on the first forward line and the first power-play unit, so plenty of ice time for him to make an impact.

Roman Josi – He averaged over 25 minutes of ice time per game, on the first defensive pairing, the second power-play, and simply a tank for the Predators blue line. Expect an all-star level showing from him in this series, as he will be tasked with shutting down the Jets top line.

PGA Brian Gay a pre-tournament WD at the Mayakoba

NBA Mavs vs. Lakers in prime time on Christmas Day

NBA Bojan Bogdanovic not sure if he'll be ready