Michael A. Stein recaps the injury news heading into the Divisional Round and offers up potential return timetables and suggestions for replacement players for fantasy football. 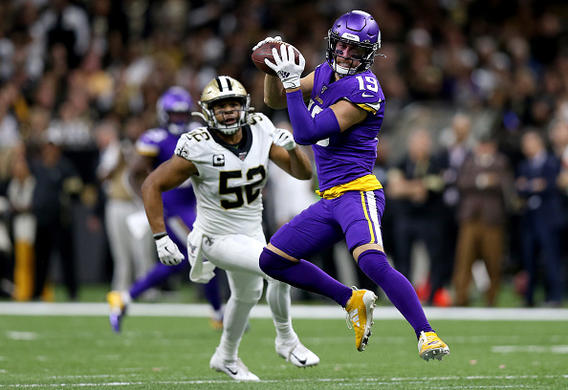 The Divisional Round of the NFL playoffs is always the best week of football during the season.  We have four great games spread over two days filled with intriguing matchups.  The good news for people still competing in postseason leagues and DFS is that injuries do not appear to be a major factor this weekend.  There are several players dealing with varying injuries, but none are expected to be held out of this weekend’s games given the stakes.  So without any further adieu, let’s take a look at some of the walking wounded in the fantasy football emergency room.

The Chiefs dealt with a plethora of injuries all season to many of their star players including Patrick Mahomes , Tyreek Hill , and Damien Williams .  The one constant all year was Travis Kelce who had another phenomenal season catching 97 passes for 1,229 yards and five touchdowns without missing a game.  He is a little banged up now with a knee injury, but he did practice on Thursday and is fully expected to be out on the field against Houston this weekend.  Kelce is an elite DFS option in any week of the season, but never more this week against a vulnerable Texans’ defense.

The Ravens are a heavy favorite to represent the AFC in the Super Bowl this year, but one factor that could inhibit them is the health of Mark Ingram .  He suffered a calf injury towards the end of the regular season, but has had the fortune of multiple weeks off to rest and recover.  He practiced in a limited capacity on Thursday and is considered questionable for Saturday’s Divisional Round playoff game against Tennessee.  The expectation is that he will play although it seems likely that he will be less than 100%.  If he is limited, then Baltimore will turn to Gus Edwards for additional snaps.  Ingram had an elite season with the Ravens providing a superb alternative to Lamar Jackson ’s offensive prowess.

It was an injury-marred season for Thielen who missed six games due to a hamstring injury.  He finally appeared healthy towards the end of the regular season, but sustained a laceration to his ankle during practice on Wednesday.  This prevented him from practicing on Thursday which is concerning because the Vikings kick off on Saturday afternoon against the 49ers.  The expectation right now is that he will be on the field, but this is certainly a situation to monitor and take into consideration when setting lineups this weekend.  Even if Thielen does play, he will clearly be limited as he goes up against one of the league’s best secondaries.

Andrews emerged as one of the best tight ends in the league this year catching 64 passes for 852 yards and ten touchdowns during the regular season.  He did battle through a variety of injuries throughout the season, including an ankle injury over the past several weeks.  This injury limited him in practice all week but he will certainly be on the field against Houston this weekend.  Andrews is a solid DFS option in a week where there are also several other great tight ends still playing.

It has been three weeks since Will Fuller played in a game when he injured his groin.  He has had plenty of time to rest and recover, and the expectation is that he will play this weekend against Kansas City.  Fuller is always a boom or bust fantasy option as he is just as capable of catching three long touchdown passes as he is of getting injured tying his shoes.  He has practiced in a limited capacity this week, which is a positive sign that he is progressing enough to be cleared to play.  Another factor to consider is if Fuller is able to play, then that should help open some opportunities for DeAndre Hopkins .  Fantasy GMs will always be hesitant to trust Fuller, but he could be an explosive DFS option this week if the stars align.

Speaking of Texans’ wide receivers, Kenny Stills has also been limited in practice this week due to a knee injury.  He has been dealing with this for quite some time but he is fully expected to play this weekend against Kansas City.  Houston should have its top three wide receivers on the field at the same time which was a rare occurrence this year.  They will need this formation in order to be successful against the Chiefs’ stingy secondary.  He could be in for a sneaky solid game if the Chiefs devote most of their attention to DeAndre Hopkins and Will Fuller .  Stills should be an inexpensive DFS option so consider taking a flyer on him and spend your money elsewhere.

Titans wide receiver Adam Humphries missed the final four games of the regular season and also sat out of the AFC Wild Card game last week against New England.  He has already been ruled out for Saturday’s Divisional Round game against Baltimore due to the ankle injury he has been dealing with for almost two months.  This means that Tajae Sharpe will line up in three wide receiver sets along with A.J. Brown and Corey Davis .  Tennessee will have to be creative as they go up against a very solid Baltimore defense that is quite capable of limiting Derrick Henry .

The Seahawks managed to survive in Philadelphia last week despite being without their two best running backs and having a depleted offensive line.  Right guard Mike Iupati did not play last week in the Wild Card game, but he is expected to return this week from his neck injury.  This is good news for Seattle as they will be up against a solid Green Bay pass rush in less than ideal weather conditions.

Seattle’s left tackle Duane Brown also missed last week’s game against the Eagles due to injuries to his biceps and knee.  It has been reported that he will try and play through the pain this weekend against the Packers.  This is a situation worth monitoring because Green Bay’s pass rush has been stellar all season, so if Brown is out there at less than 100% then he could become more of a liability.  Either way, Green Bay’s defense should be able to control the line of scrimmage against a banged up Seahawks’ offensive line.