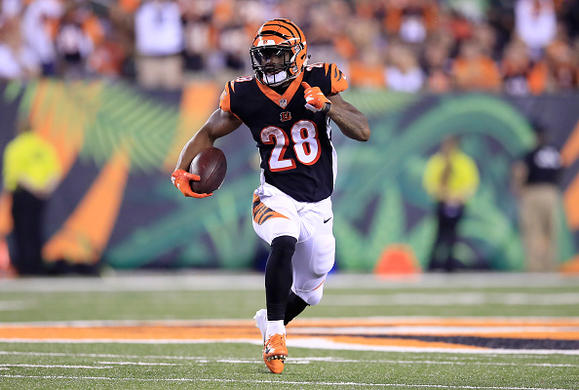 Week 2 of the NFL season is officially in the books and running backs continue to wreak havoc on fantasy GMs’ rosters.  This edition of the injury report is very heavy on running backs as we have several top rushers dealing with a variety of injuries.  This should not come as a surprise to anyone, but when it happens so early in the season it can potentially derail any chances of staying in contention for a playoff berth.  This is why scouring the waiver wire and being aggressive is so important in order to accumulate depth. So without any further ado, let’s delve into the next edition of the 2018 fantasy football emergency room.

The good news is that the Bengals did not place Mixon on injured reserve.  The bad news is that he will likely miss between two to four weeks after undergoing surgery on his knee.  Mixon has been impressive thus far rushing for 179 yards and one touchdown along with six receptions for 57 yards.  Now he will cede rushing duties to Giovani Bernard and company which is a major downgrade for a Bengals team that has gotten off to a hot start this year.  Even still, Bernard is worth targeting on the waiver wire as he should see the majority of snaps in Mixon’s absence.

Cardinals wide receiver Larry Fitzgerald was taken out of Sunday’s blowout loss to the Rams with a hamstring injury.  He did eventually return but still seemed to be slowed down by it. Arizona’s offense has been abysmal thus far so you can only imagine what would happen if the future Hall-of-Famer was unable to play next week.  He will likely be limited in practice this week but we won’t have a clearer picture for his Week 3 status until later in the week. Fitzgerald has been limited to ten catches for 104 yards and no touchdowns thus far, and his fantasy value has been drastically diminished because of Arizona’s horrendous offense. 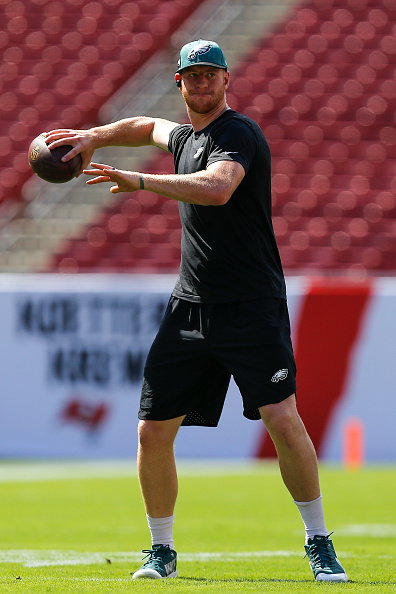 The Eagles have officially named Carson Wentz as the starting quarterback for Week 3 against Indianapolis.  He is returning from knee surgery and will see his first regular season game action since December 2017. The Eagles have been decimated by injuries to their wide receivers so Wentz will likely be targeting Nelson Agholor and Zach Ertz quite frequently.  He is coming off a stellar season in which he threw 33 touchdowns but expectations should be tempered for now due to his current lack of weapons.

Freeman missed Week 2 with a knee injury and could miss another couple weeks as well.  He re-aggravated an injury that he sustained last year and it limited him to just six carries for 36 yards in Week 1.  Tevin Coleman will continue getting more opportunities as the Falcons’ starter and Ito Smith will be his handcuff while Freeman remains out.  Coleman is a solid RB1 option with the ability to break a big run any time he touches the ball.

Landry participated in practice on Monday in a limited capacity due to a knee injury.  The Browns do not seem overly concerned and expect him to be on the field against the Jets on Thursday night.  Given it is a short week, that could change if he suffers any setbacks so closely monitor this over the next two days.

Cook sustained a hamstring injury in overtime against Green Bay last Sunday.  He referred to the injury as cramps, but either way it was serious enough of an issue to limit his ability at the end of the game.  Cook has been more impressive catching the ball thus far with nine receptions for 107 yards while being limited to just 78 rushing yards and averaging three yards per carry.  He will have a great matchup against a demoralized Buffalo team in Week 3.

It has not taken long for fantasy GMs to grow sick and tired of owning Fournette in leagues.  He missed several games last year with injuries and has already missed a game and a half with a hamstring injury this year.  It is unknown yet whether he will play in Week 3 so keep T.J. Yeldon on your roster as a RB2 or Flex option against Tennessee this weekend. 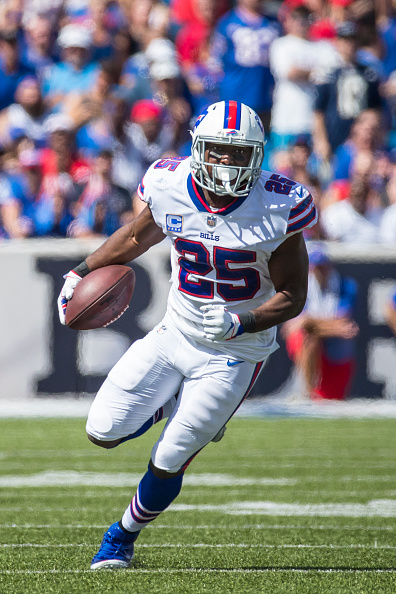 The Bills season has already fallen apart and things are only getting worse.  LeSean McCoy has been pegged as questionable for Week 3 as he is dealing with cracked ribs.  It is possible he could play through the injury and wear extra padding, but logic would dictate that Buffalo will keep him off the field for a week and allow him time to heal.  Chris Ivory would get the start if McCoy cannot go. Shady is a shell of his former self and is playing on one of the league’s worst offenses, so his fantasy value has plummeted to new depths.

Mariota did not play this past week against Houston as he continues dealing with an elbow injury.  He was available in an emergency, but Tennessee has acknowledged that he is unable to make all of his throws.  It is possible he could get the start this weekend, but that could be disastrous against a stellar Jacksonville defense which would smell blood.  Mariota is barely worth rostering at this point and he has deservedly acquired the stigma as a major injury risk at this point in his career.

With Alshon Jeffery out the first couple weeks of the season, there was an opportunity for veteran Mike Wallace to emerge as a viable downfield threat for the Eagles.  Unfortunately, that never happened and likely won’t for a while. Wallace sustained a fractured fibula this past Sunday against Tampa Bay and will be out for several weeks.  He was not placed on injured reserve so the Eagles do expect him back within the next two months. Nelson Agholor remains the only viable healthy receiver for Carson Wentz ’s season debut this coming week.

Zuerlein has been one of the best fantasy kickers for several years and started the season strong making four of his first five field goals and all three extra points.  However, he suffered a groin injury during pregame warmups before the game against Arizona and will be out for a few weeks. The Rams signed Sam Ficken to take his place, but there are probably better options on the waiver wire to replace Zuerlein.