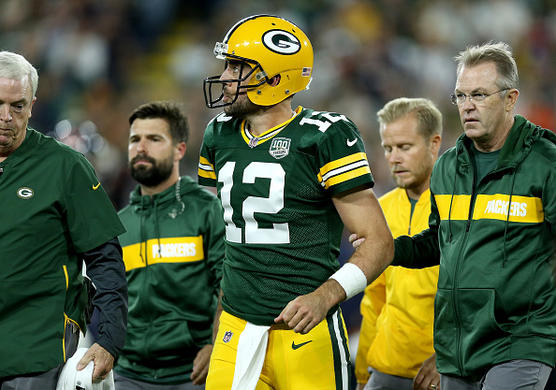 It did not take very long to see several elite players on the injury report.  The problem is that NFL teams take a long as they can before making any official declarations about the status of players, so you will likely have to be diligent over the weekend and follow for updates right up until the time you set lineups.  So without any further ado, let’s delve into the next edition of the 2018 fantasy football emergency room.

After missing almost the entire 2017 season with a wrist injury, David Johnson re-emerged as one of the top fantasy picks heading into 2018.  Now he is dealing with a back injury this week and has been limited in practice this week but is fully expected to play in Week 2.  He had an uninspiring game last week finishing with nine rushes for 37 yards and did not play much in the second half, but he did score a touchdown which helped salvage his overall fantasy output.

We still do not know for sure whether Aaron Rodgers will play this Sunday against Minnesota as he continues to rehab from his knee injury sustained last week.  Rodgers miraculously came back in the second half against the Bears to lead Green Bay to a tremendous comeback victory, but it was apparent he was in pain and unable to put much weight on his leg.  All you can do is continue to follow for updates later today and over the weekend to see whether Rodgers will indeed take the field.  If he is unable to go, then that drastically changes the outlook for all of Green Bay’s offensive players and makes the Vikings defense/special teams an even more dominant option. 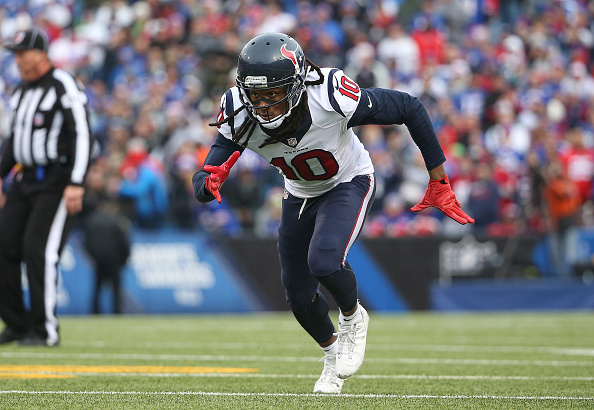 Hopkins practiced on Thursday in a limited capacity as he continues dealing with a foot injury.  It is likely that Houston is just protecting Hopkins from any unnecessary exposure to injuries so he will be on the field unless he experiences any setbacks before Sunday.  He will be an elite fantasy option this week, especially if Will Fuller returns which he is expected to do.

Adams has been dealing with a shoulder injury this week which cost him some days of practice this week.  He was able to return on Thursday in a limited capacity and indicated that he felt good despite not being back to 100%.  While it is not a lock at this point, all signs are pointing towards Adams playing.  His fantasy value will be determined by whether Aaron Rodgers can play because he will likely be matched up against Xavier Rhodes and the rest of the Vikings strong defense.

Fantasy GMs are already pulling their hair out over Freeman who was limited to six carries for 36 yards and three catches for 14 yards in Week 1.  He is also dealing with a knee injury which has cost him the past couple days of practice.  We should know more later in the day, but it looks like there is a good chance that Tevin Coleman gets the call as Atlanta’s primary running back for Week 2.

One of the worst things fantasy GMs can hear about a player is being a game-time decision.  That is exactly what Leonard Fournette has declared himself with respect to his hamstring injury.  He has missed practice all week but is expected to return today.  Even if he does take the field, it is reasonable to expect he won’t be 100% and will likely cede carries to T.J. Yeldon who had a solid game last week against the Giants.  Fournette is a risky fantasy option this week so be prepared to go with an alternative.

Big Ben has been held out of practice this week with an elbow injury but at this point it seems likely that he will play on Sunday against Kansas City.  It is concerning when a player misses practice multiple days in a row, but a veteran like Roethlisberger knows his own body and does not need to practice in order to be ready to play.  If for whatever reason Roethlisberger does not play, then Kansas City’s defense/special teams would be a great streaming option against backup Josh Dobbs.

Tennessee has already declared that Mariota will play barring any setbacks with respect to his elbow injury that he sustained last week.  He has been limited in practice this week but is still expected to play against Houston in Week 2.  His fantasy value took a big hit last week when the Titans lost tight end Delanie Walker to a season-ending injury.

Speaking of Titans injuries, second year wide receiver Corey Davis has been limited in practice this week with a hamstring injury.  He has indicated that he will be fine and expects to play this Sunday against the Texans.  Davis caught six passes for 62 yards last week and figures to see even more targets now that Delanie Walker is out for the season.

Patriots rookie running back Sony Michel practiced in a limited capacity on Thursday but thinks he will be ready to play on Sunday against Jacksonville.  New England is very thin at running back right now after Jeremy Hill sustained a season-ending injury and Rex Burkhead is currently in the league’s concussion protocol.  Michel would be in for a tough matchup against a stellar Jaguars defense, so temper expectations if he is able to take the field.

Bad news for Panthers tight end Greg Olsen who re-fractured his right foot and will be out for a significant amount of time.  He claims to be optimistic that he will play again this year, but that remains to be seen.  Carolina did not put him on injured reserve so the door is open for him to return if he is physically able.  This is a big loss for the Panthers and Cam Newton who will now turn to Ian Thomas as their starting tight end.

Mack has been practicing in a limited capacity this week as he hopes to make his season debut this Sunday against Washington.  He has been dealing with a hamstring injury for weeks and right now we do not have a clear indication of whether he will be able to play.  Even if he is active, he is not a great fantasy option as part of a less than stellar group including rookie Jordan Wilkins and Nyheim Hines .

DeSean Jackson (WR-TB)
Jackson was able to return to practice on Thursday in a limited capacity after going through the concussion protocol.  He had a huge game last week against the Saints but may be limited in his opportunities this week at less than 100% against one of his former teams.  Chris Godwin expects to see an increase in targets if Jackson either does not play or is limited against the Eagles.

D. Baker - DB
NYG
The Newark Star Ledger reports DeAndre Baker's future with the Giants is "in doubt."
Baker's status hasn't changed after he was charged with four counts of robbery. The Giants signed Ross Cockrell and are expected to move on from Baker, but there's been no comment from the team. Baker wouldn't cost a roster spot if the Giants wait out his legal process. He'll spend the year on the Exempt List if he isn't waived.
Added 4:00 pm (EST)
Added 4:00 pm (EST)