Steve Pimental does a deep dive into the WNBA offseason of the Washington Mystics, including their acquisitions and losses and what the fantasy outlook is like for key players. 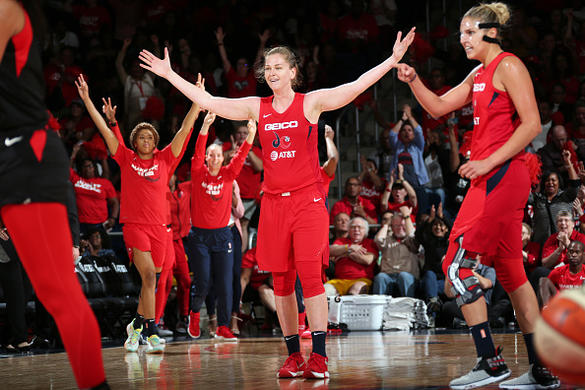 As we long suspected, the start of the WNBA season has been postponed, but we still need to be prepared for when it does start. With the WNBA Draft still set for April 17, we continue our look at each team’s offseason ahead of the said draft.

Before COVID-19 dominated the news, the WNBA experienced its most exciting offseason ever. Nine former All-Stars changed teams, and all of the contenders made significant moves in an arms race that rivaled the NBA’s 2019 offseason. Since we’re all socially distancing anyway, now seems like a perfect time to continue our look at what each team did this offseason and how they are looking for 2020.

The defending champs are basically running it back, replacing Kristi Toliver with Leilani Mitchell. Mitchell was the WNBA’s most-improved player in 2019, breaking out in her 11th season in the league. Mitchell set new career-highs in minutes, points, and field goal percentage, while her 43.0 three-point percentage was her highest since 2010. Toliver is widely considered one of the best three-point shooters in WNBA history, but Mitchell’s 39.6 percent career three-point percentage is actually better than Toliver’s 38.7 career mark, though Toliver has a lot more attempts.

Mitchell is not the same player as Toliver. Toliver has been a starter for nearly her entire career, while Mitchell had never been asked to carry the load for her team before last season. That being said, if Washington was going to lose Toliver anyway, replacing her with Mitchell was probably the best they could do, and keeping Delle Donne and Meesseman is obviously huge for the franchise going forward.

The Mystics have the 12th pick in the draft. Washington had arguably the deepest team in the WNBA last season, and whoever Washington drafts will not be expected to contribute until at least 2021. Washington could go in any number of directions, though if they’re targeting a need, they could look for a big who can provide insurance in case Emma Meesseman leaves after the 2020 season. They could also draft a guard who could possibly replace Leilani Mitchell when her contract is up after 2021. 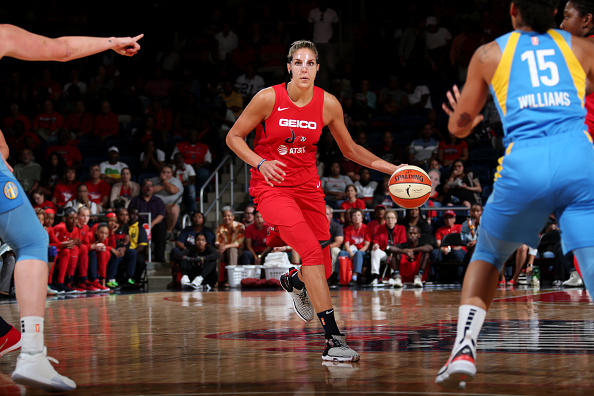 Cloud, Sanders, Atkins and Delle Donne all started 30+ games last season, and that shouldn’t change when they are healthy. The last starting spot could be interesting, however. Kristi Toliver only played 23 games during the regular season, so it isn’t a complete mystery how Washington will deal with her absence. Down the stretch, including for three games in the playoffs, Emma Meesseman got the start next to LaToya Sanders and Elena Delle Donne. Mystics head coach Mike Thibault seemed reluctant to start Meesseman early on, but his team had a lot of success when he did. In 262 minutes together between the regular season and playoffs, Sanders, Meesseman and Delle Donne had a 24.5 net rating. Washington’s best lineup almost certainly has Emma Meesseman in it, but that doesn’t necessarily mean Meesseman will start most games.

The simplest way to configure the starting lineup would probably be to replace Toliver with Leilani Mitchell. Mitchell is a great floor spacer and while she can handle the ball, she doesn’t need it in her hands. She is capable of running second units but you don’t really need her to if Meesseman is coming off the bench. Mitchell started 27 games last season but came off the bench of every game in 2018, so she is obviously capable of filling either role. Mitchell played 10 games for Washington in 2016 and came off the bench in those games, though it is impossible to know if that will have any impact on her role in 2020.

While Mitchell and Messeman may be the most likely starters, Coach Thibault has other options. Tianna Hawkins played great in a limited role last season and did start one game. She might be the most exciting option, at least for fantasy. Aerial Powers started seven games in 2019, averaging 16.0 points and 26.6 minutes as a starter. Shatori Walker-Kimbrough and Myisha Hines-Allen could be in the mix as well, but it would probably take an injury or two for that to happen.

Washington didn’t appear to slow down at all last season in the games Kristi Toliver missed, and they didn’t have anyone like Leilani Mitchell to take her minutes. We’ll have to see how Mitchell fits, especially defensively, but the Mystics have plenty of bigger options at the three if they don’t want to play what would essentially be a three-guard lineup with Natasha Cloud, Mitchell and Ariel Atkins.

Barring a huge injury or two, Washington will almost certainly finish in the top half of the league and be a legit title contender. The Mystics were the only team in the WNBA with a winning record on the road last season, going 12-5 away from the Entertainment and Sports Arena. Road wins may be harder to come by, especially against the other top teams, but I don’t think anyone would be shocked if Washington finishes with the best record in the league for the second year in a row.

The biggest obstacle to Washington contending again would probably be Elena Delle Donne’s health. EDD has never played more than 31 games in a season, averaging 27.1 games per season in her career. Both the Mystics and Sky have seen promising playoff runs come to an abrupt end due to an ill-timed Delle Donne injury. If there is any reason for pessimism among Mystics fans, that would probably be it.

The Mystics are tied with the Aces for the best championship odds at 3/1. I think it is smart that the Mystics are the co-favorites, though I would probably have them tied with Seattle and not Las Vegas. The Mystics basically have their entire Championship team intact, and the only reason they’re not the overwhelming favorites is that Seattle’s 2018 title team is now healthy, while the Aces, Sun, Sparks and Mercury all added really good players in the offseason. Still, we know this team is deep and fits together well and is capable of winning it all. You cannot say that about most of those other teams. There are other bets I like better, but if I had to bet one of the four Vegas favorites, I would bet Washington.

When in doubt, play the Mystics bigs. Washington had six forwards who averaged more than 0.90 fantasy points per minute last season. The downside for fantasy is that none of those forwards averaged 30 minutes per game, and only three averaged 20+ minutes per game. When everyone’s healthy, you really only want to play Elena Delle Donne and Emma Meesseman, but when one of the starters is out, this is a great place to find value. Last season, Aerial Powers averaged 26.3 fppg in seven starts. Tianna Hawkins had 32.9 fantasy points in her only start. Washington’s backup bigs are essentially must-plays when they are looking at increased playing time.

Washington’s guards are a bit of a different story. Natasha Cloud averaged 22.1 fantasy points in 32.2 minutes last season, and while her usage may increase a little bit with Kristi Toliver gone, that wasn’t really the case the Toliver missed games last season. Cloud remains a solid cash play, but I don’t think she holds a ton of fantasy value.

Ariel Atkins could be a bit of a different story. She averaged 21.6 fppg last season in just 24.3 minutes. If Leilani Mitchell doesn’t take all of Toliver’s old minutes, Atkins could find her way into 30ish minutes per game. That would represent solid value, though I’m not sure her ceiling would be super high.

As for Mitchell, I intend to take a wait-and-see approach for fantasy early on. Mitchell’s 24.4 fppg last season was a career-high, and I don’t want to play for that production when we have no idea how many minutes she’ll play. Even if Mitchell plays 30 mpg, do we really expect a repeat of her career-high 18.5 percent usage now that she’s on a much more talented team? Again, a repeat of last season is possible, especially if she steps right into the exact same role Toliver had, but I don’t think it’s the most likely outcome 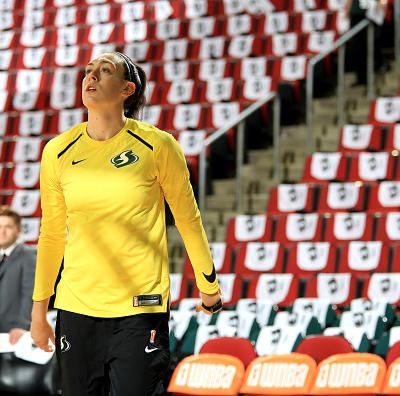 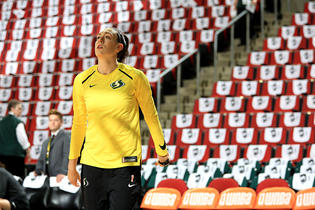