Steve Pimental does a deep dive into the offseason of the Minnesota Lynx including their acquisitions and losses and what the fantasy outlook is like for key players. 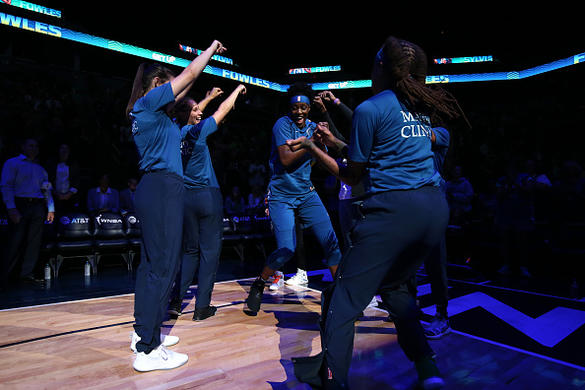 The start of the WNBA season, like everything else in the world right now, is up in the air. Even so, we expect the season to begin at some point, and when it does, we will be ready. Before coronavirus dominated the news, the WNBA experienced its most exciting offseason ever. Nine former All-Stars changed teams, and all of the contenders made significant moves in an arms race that rivaled the NBA’s 2019 offseason. Since we’re all socially isolating anyway, now seems like a perfect time to continue our look at what each team did this offseason and how they are looking for 2020.

Minnesota has gotten a lot of criticism for doing so little this offseason, and some of that criticism is justified. The Lynx had a pretty glaring need for guards with the departures of Siemone Augustus and Danielle Robinson and the absences of Maya Moore and Odyssey Sims. They are attempting to fill the hole in their lineup with Rachel Banham, Lexie Brown, Shenise Johnson, Cecilia Zandalasini and Linnae Harper, and it is understandable that some observers would be underwhelmed by those backcourt options.

It’s even easier to be critical of Minnesota for getting so little done after they pursued DeWanna Bonner and Kristi Toliver but came up short. The Lynx balked at the price of three first-round picks for a free agent in Bonner, and it’s easy to argue that holding onto a few picks that are unlikely to be great anyway is a mistake when you have a chance to add one of the ten best players in the league. If you can add Bonner and Toliver to your team, the argument goes, you just do it and figure out the rest later.

I get that argument, but I think it is too harsh. Three first-round picks is a lot to give up for a player who is leaving anyway. Connecticut only got one first-round pick last offseason for Chiney Ogwumike, and she was still under contract for a year. I also think it is fair for Minnesota to value draft picks a bit more than most after they drafted the 2019 rookie of the year, Napheesa Collier, with the sixth overall pick. Their second-round pick, Jessica Shepard, also played very well as a rookie before she suffered a season-ending ACL injury. It’s not unreasonable for Minnesota to think they can get cheap, productive players with their first-round picks, even if those picks are late in the round.

I also think Minnesota’s guards are pretty good. They may not have anyone who’s going to breakdown a defense and create shots, but they do have players who can space the floor around Minnesota’s bigs. Cecilia Zandalasini is just 24 years old, and she shot 37.5 percent on threes for Fenerbahce between the Turkish league and Euroleague. Lexie Brown shot 38.5 percent on threes after coming over from Connecticut last season, and it is not unreasonable to think Rachel Banham could improve her three-point shooting after making the same move a year later.

Shenise Johnson struggled last season after returning from a knee injury, but she averaged 11.3 points, 3.4 rebounds, 2.5 assists and 1.2 turnovers in 24.9 minutes in 2017. If she is healthy and can return to her old form, she will be a solid point guard, either starting or off the bench. I also think Linnae Harper, if she makes the team, is a fine backup point guard. I would much rather sign her for the minimum than give out a big contract to Tiffany Mitchell, Kahleah Copper or Bria Hartley.

It’s also too soon to assume the Lynx are done making moves. I wouldn’t be at all surprised if the Lynx are active in the trade market around the draft or during the season. If there’s a smart deal to be made, I trust Cheryl Reeve to get it done.

If the Lynx are drafting for need and/or think they can win this season, they will take either Chennedy Carter or Tyasha Harris with the sixth overall pick, assuming Carter declares for the draft and one of them falls that far. If not, the Lynx will probably wind up reaching for a guard or drafting a very good forward without an obvious path to playing time. Minnesota could split the difference by drafting Ruthy Hebard or Megan Walker and then taking Crystal Dangerfield in the second round, if she falls that far.

The only starting spot that is really unsettled at this time is point guard. Shenise Johnson has the most starting experience of the group, though she came off the bench in all 17 games for Indiana last season. If she is completely healthy and at her best, this job is probably hers to lose. I just cannot predict that will happen after she has dealt with major injuries in each of the last three seasons.

Cheryl Reeve hinted on her podcast that Rachel Banham would get the first shot at the starting point guard spot, and Banham asserted on another episode that she is a better ball handler than she was able to demonstrate in Connecticut. If that is truly the case, I could see Banham getting the first crack at the job and holding onto it for the season.

Cecilia Zandalasini might turn out to be the best point guard of this group, but her lack of experience with the Lynx could hurt her. If the WNBA has a full preseason and Zandalasini is able to participate, I could see her beating out Banham and earning the starting job. Those are both big ifs.

Lexie Brown appears pretty locked in at shooting guard to start the season, though Reeve could legit play any combination of her guards together. That could include Brown getting more minutes at point guard, but her best fit likely remains spotting up off the ball, knocking down threes and attacking closeouts off the dribble.

In yet another interesting reveal from her podcast, Reeve said she saw no reason to break up her starting frontcourt from last season, and it is easy to see why. The Lynx had a 6.5 net rating with Damiris Dantas and Napheesa Collier both on the floor, and a 1.7 net rating in all other lineups. The Lynx got a lot of mileage out of posting up Collier when she was defended by small forwards, and they will likely lose that option when they play Collier and Karima Christmas-Kelly together. In fact, Minnesota had a -7.9 net rating with both Collier and Christmas-Kelly on the floor last season, though they only played 41.5 minutes together. I like the idea of using Christmas-Kelly as a super sub and staggering minutes so that she or Collier are on the floor at all times, so long as the veteran buys in.

Of course, one of the reasons Collier and Dantas were so good together last year was that Dantas shot 39.3 percent on threes. If she falls back to her 33.1 percent career average, it could make sense to start Christmas-Kelly, who provides more shot creation and versatility. I’ll be keeping an eye out all season to see if and when Christmas-Kelly can play her way into the starting lineup.

Minnesota finished one game over .500 last season, and on paper, it is reasonable to expect them to finish there again. Minnesota has one of the strongest frontcourts in the WNBA with Sylvia Fowles, Damiris Dantas, Napheesa Collier, Karima Christmas-Kelly and Jessica Shepard, but they might have the weakest backcourt in the league. That could certainly add up to a .500 record, but I think the Lynx will be better than that.

Minnesota was tenth in the WNBA in three-point attempts last season and ninth in three-point percentage, and both of those should improve in 2020. Perhaps as a result of their poor three-point shooting, Sylvia Fowles scored the fewest points per game of her Lynx tenure. She shot her lowest percentage from the field since 2015 and had her fewest free throw attempts per game since her rookie season. With better shooting and better health around her, I would not be at all surprised if she and her team both perform significantly better than last season.

Minnesota is 40/1 to win the NBA finals, and this is my favorite bet, at least among the longshots. Minnesota hovered a bit above .500 for most of the season and never really challenged the top seeds, but I blame some of that on health. They have an  MVP candidate in Sylvia Fowles, the best coach in the WNBA in Cheryl Reeve and the reigning Rookie of the Year in Napheesa Collier. Add in more than six games each from Karima Christmas-Kelly and Jessica Shepard, and that’s a team that has a chance to contend.

The other reason I like this bet now is I think Minnesota could be best positioned among the playoff teams to add a big piece if one is available. If they could swing a trade for Tina Charles or someone of her ilk, their championship odds would improve quite a bit.

Sylvia Fowles averaged 31.5 fppg last season, her lowest since 2009. Some of that could have been due to the absences of Maya Moore and Lindsay Whalen, but I blame her struggles on Minnesota’s lack of outside shooting. It was easier than ever to crowd Fowles in the paint since Danielle Robinson and Odyssey Sims were not threats to shoot from outside. I would take the over on 31.5 fppg for Fowles this season, and if she can get back to the 40+ fppg she averaged in 2017 and 2018, she could be a nice bargain early on.

Similarly, whoever emerges in Minnesota’s backcourt could provide a good amount of value. Shenise Johnson averaged 23.2 fppg in 2017, and she could do that again if she starts. Lexie Brown is probably the safest bet among the Lynx guards, but her ceiling could be limited if she continues to spend most of her time off the ball.

I think Cecilia Zandalasini has the highest fantasy upside in this backcourt, and selfishly, I want to see her take the starting point guard job and run with it. I don’t know that she’ll ever be a 20-point scorer, but she has a chance to have the ball in her hands a lot, throw a lot of entry passes to Slyvia Fowles and contribute at least a little bit in every counting stat. She’s someone to keep an eye on, and she’ll likely be in some of my DFS lineups the first time she starts for Minnesota.

The biggest mystery for fantasy is how Collier will perform with Karima Christmas-Kelly back in the fold. If Christmas-Kelly is healthy and plays close to her career average of 23.0 minutes per game, she could take minutes, rebounds and offensive touches from Collier. Collier was great last season, but she averaged 35.9 fppg after the All-Star break and 28.3 fppg before it. With Christmas-Kelly back, there is a chance Collier returns to her early-season fantasy production. I doubt I’ll fade her altogether, but she may be a GPP-only play early on.

Christmas-Kelly has a chance to make Damiris Dantas irrelevant for fantasy once again. Even if Dantas does continue to produce, that could change if/when Jessica Shepard returns to the court. Dantas has reached 16 fppg twice in her seven-year WNBA career, and I will be just fine fading her this season.