Steve Pimental does a deep dive into the offseason of the Indiana Fever including their acquisitions and losses and what the fantasy outlook is like for key players. 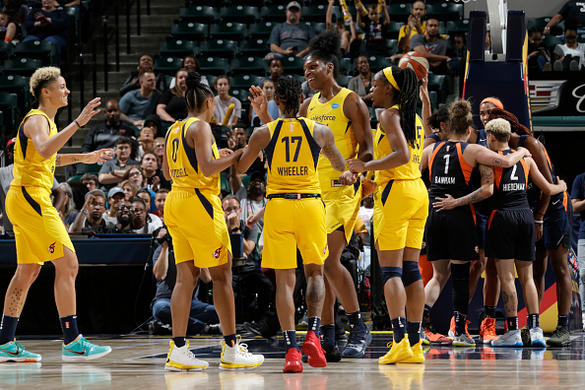 The start of the WNBA season, like everything else in the world right now, is up in the air. Even so, we expect the season to begin at some point, and when it does, we will be ready. Before coronavirus dominated the news, the WNBA experienced its most exciting offseason ever. Nine former All-Stars changed teams, and all of the contenders made significant moves in an arms race that rivaled the NBA’s 2019 offseason. Since we’re all socially isolating anyway, now seems like a perfect time to continue our look at what each team did this offseason and how they are looking for 2020.

This offseason, obviously the Indiana Fever are thinking… I don’t know what they’re thinking. Indiana didn’t do anything this offseason, except pay top dollar to keep together a team that finished in the lottery for the third consecutive season and hasn’t had a winning record since 2015. Eight of Indiana’s 13 wins last season came against the three other lottery teams. Two of those teams made moves this offseason to make themselves significantly better, and the other is going to draft Sabrina Ionescu.

Indiana Fever General Manager Tamika Catchings would probably argue that the Fever will improve internally. That is a reasonable argument. Indiana went 6-6 from August 1 on, thanks mostly to the emergence of rookie Teaira McCowan, who belatedly demonstrated why she was the third overall pick in the WNBA draft. McCowan averaged 14.9 points and 10.5 rebounds in 25.3 minutes per game after the All-Star Break. Just maintaining that production for a full season would give Indiana a boost, and she certainly has room to grow in her second season.

Indiana will also hope to benefit from the continued growth of Kelsey Mitchell, as well as the return of Victoria Vivians. Vivians missed the entire 2019 season recovering from surgery to repair a torn ACL. Vivians shot 39.9 percent on threes as a rookie, and her spacing would be welcome around McCowan, Mitchell and Candice Dupree. Vivians only shot 40.4 percent overall in 2018, but there is reason to believe that will improve, especially now that she has better players around her.

Giving those three young players (and whoever Indiana drafts with the third overall pick) a chance to grow under new head coach Marianne Stanley makes some sense, but that doesn’t mean I think they had a good offseason. In their only significant move of the offseason, Indiana matched the Atlanta Dream’s offer sheet for Tiffany Mitchell. As I mentioned in my Atlanta Dream Offseason Breakdown, I thought Indiana did Atlanta a favor by matching that offer. Mitchell has done nothing in multiple opportunities to prove she is worth such a lucrative contract. Her athleticism is tantalizing, but she has never shot better than 38.1 percent from the field or 29.4 percent on threes. Mitchell will get yet another chance to play significant minutes with Shenise Johnson going to Minnesota, but even if she provides some scoring punch off the bench, I hate this contract for the Fever. It does help a little that Indiana will have a ton of cap space after the season with Candice Dupree, Natalie Achonwa and Erica Wheeler all set to become free agents.

Most mock drafts have Indiana taking whoever remains with the third overall pick between Satou Sabally and Lauren Cox. I have a hard time disagreeing with that. Indiana would be much better off, at least for 2020, if Sabally would fall to them. She could play the three while the Fever would continue to give all their post minutes to Teaira McCowan, Candice Dupree, and Natalie Achonwa. If Cox is the pick, she would likely battle Achonwa for backup minutes before presumably taking on a larger role in 2021, when Achonwa and Dupree are both due to be free agents. A big would probably make sense in the second round as well. At that point, you’re not expecting whoever you pick to play much as a rookie anyway, and it is possible they could develop into a rotation player if Achonwa and Dupree move on. That being said, if Crystal Dangerfield falls to the second round, I think she’d be a great pick. She is probably better than Tiffany Mitchell right now, and she could be a backup point guard this season and for years to come.

Victoria Vivians started 26 games as a rookie, and if she is healthy, she should replace Benijah Laney in the starting lineup rather easily. Vivians will greatly improve Indiana’s spacing, which should be especially beneficial for Teaira McCowan and Erica Wheeler.

The rest of the starting lineup will almost certainly remain the same from the end of last season. McCowan was great after replacing Natalie Achonwa in the starting lineup, and Indiana doesn’t have anyone to push Wheeler to the bench even though she struggled mightily down the stretch in 2019.

I would consider it a major victory for new head coach Marianne Stanley, and an indictment of former head coach Pokey Chatman, if Indiana avoids finishing in the lottery for the fourth consecutive season. The problem is that Indiana could be significantly better than they were last season and still not improve in the standings due to the improvements the other lottery teams have made. Indiana might be able to beat up on the Liberty and Dream again, but I think Dallas leapfrogged them, and all the playoff teams did enough to stay ahead of them.

Indiana’s starting five is solid, and Achonwa is one of the better bench bigs in the league, but the rest of the rotation is a huge question mark. Betnijah Laney and Tiffany Mitchell probably shouldn’t be playing important minutes for a team with playoff aspirations, and unless they're going to stagger Erica Wheeler and Kelsey Mitchell, Indiana doesn't really have a backup point guard.

That being said, there is a path forward for this team to push for a playoff spot. It starts with Teaira McCowan picking up where she left off last season. From August 15 on, McCowan averaged 17.4 points, 11.6 rebounds, 1.3 blocks and 28.4 minutes per game. She should get close to 30 mpg under the new regime, and it’s possible her ceiling is even higher than what she showed down the stretch last season.

The problem for Atlanta is that the better Teaira McCowan played, the worse Erica Wheeler played. In that same nine-game stretch from August 15 to the end of the season, Wheeler averaged 4.9 points and 2.1 turnovers in 22.4 minutes per game on 25.5 percent shooting. This is where Victoria Vivians’s return could be most felt. With Vivians spacing the floor, Wheeler should have more room to operate, even when McCowan is in the game. If you add in another year of growth from Kelsey Mitchell, you start to see the makings of a pretty decent team.

For as quiet as Indiana was this offseason, they could also stand to make a couple of moves around the draft. They could probably bolster their bench either by picking up players cut by other teams, or trading for players or draft picks from other clubs. If Dallas is not able to put together a package for a star, they’ll almost certainly have to trade some of their draft picks and/or bench players. Someone like Karlie Samuelson might make sense for Indiana and provide some shooting off the bench.

Conversely, Indiana could pivot into another season of rebuilding either at the draft or during the season if it looks like they are as bad as I expect them to be. Dupree and Achonwa would both have value on the trade market for contending teams, and Wheeler could as well. Indiana should probably consider trading all of them if they look like they’re going to miss the playoffs again.

Indiana has the same 40/1 Championship odds as the Minnesota Lynx, which is sheer lunacy. Even if Indiana was 100/1 I’m not sure I would bet them over Atlanta or Dallas. I suppose if you think Erica Wheeler, Teaira McCowan, and Kelsey Mitchell play like All-Stars for the entire season, maybe you could talk yourself into it. That’s a hard sell, considering we haven’t seen even one of them put it together for an entire season yet.

Teaira McCowan was a must-play for a while after taking the starting job and running with it late in the season. She averaged 36.0 fppg in the last nine games of the season. Her fantasy prospects early on will all come down to price. If you don’t have to pay top dollar, you’ll get a solid floor and 40+ fantasy point upside. I would just hate to have to pay for her peak production.

The rest of this team was hard to trust for fantasy in 2019, and 2020 figures to be no different. Erica Wheeler will be a GPP early on. She showed in the first half of 2019 how great she can be, and I’d be willing to take a shot that she figured some things out in the offseason and will regain that form. I just have a hard time getting past how terrible she was for fantasy after the All-Star Break. I’d feel better about Wheeler for fantasy if I had any explanation for why she struggled down the stretch.

Similarly to Wheeler, I think Kelsey Mitchell is a GPP play to start the season. Mitchell has always had talent, and would likely benefit the most if the team around her has improved. Victoria Vivians could be a value play, assuming she is cheap enough, but it is hard to imagine she will have the ball in her hands enough to really put up fantasy points.

Candice Dupree and Natalie Achonwa are solid players, though Dupree’s fantasy production was inconsistent last season. If either one were to suffer and injury, the other would immediately be playable, though I wouldn’t be super excited to play them. Both players had under 20 percent usage rates last season, and that is unlikely to change much no matter how many minutes they’re getting.