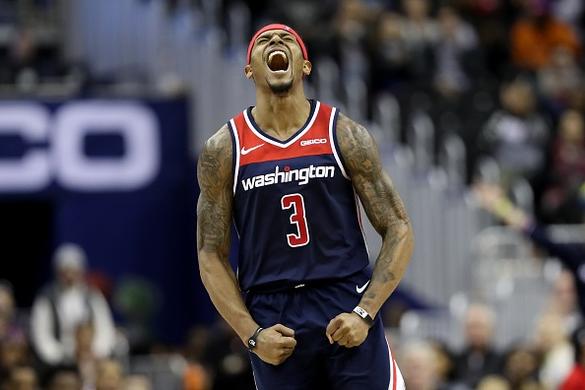 Two weeks ago we crushed our first foray into SuperDraft’s NBA contests, with a cash lineup that saw at least 50 fantasy points from every player, including a couple of players who had very big games for us. This week we are changing it up slightly with a GPP lineup. I am considering entering this lineup for cash because I like it so much, but I had a hard time creating a lineup of players who I trust completely for cash. That could change as we get more injury updates closer to tipoff.

White had 34 fantasy points in 31.2 minutes Thursday despite shooting 5-15 from the floor and 2-7 on threes. White should see even more minutes and shots if Zach LaVine cannot go. White is a bit risky, especially if LaVine plays, but his upside is enormous. 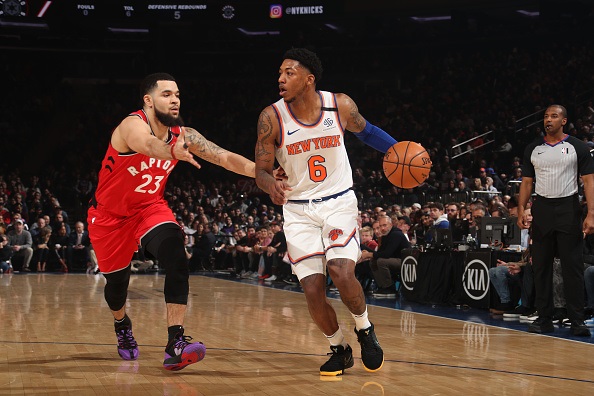 Payton has scored at least 37.25 fantasy points over his last four games, averaging 49.1 fantasy points over that span. Payton’s multiplier is awfully high considering how productive he’s been lately, though I am concerned R.J. Barrett will play more minutes and cut into Payton’s usage. It helps that no team has allowed more fantasy points than the Hawks this season.

I wish I could explain his recent struggles. Maybe he’s hitting the proverbial rookie wall, in which case we probably should avoid him for fantasy until after the All-Star break. That being said, only the Pistons have allowed more fantasy points to opposing point guards than the Wizards, and if Morant can reach 40 fantasy points, as he did seven times in January, his multiplier will take care of the rest.

Mitchell scored 53.25 fantasy points in his last game against Houston, and Houston’s rim protection has only gotten worse since then. Mitchell has struggled in two games against Denver the last couple of weeks, but otherwise has at least 36 fantasy points in seven straight games. He is a great play for cash and GPP lineups.

Conley appears to have turned a corner, with at least 33.75 fantasy points in three straight games. I think I trust Donovan Mitchell more, but Conley’s multiplier makes it tempting to play them both.

Beal has scored at least 47.75 fantasy points in eight straight games, and you could argue he is the safest player of the entire slate. He is averaging 56.6 fantasy points over that span, and when you consider his multiplier, he becomes a strong GPP play as well.

Hutchison is averaging 28.4 fantasy points in 27.15 minutes over his last four games. He looks pretty safe while Kris Dunn remains out, and he should take on an even bigger role if Zach LaVine cannot go.

JJJ struggled in 20 minutes against Philadelphia Friday, but he had at least 35 fantasy points in each of his two games before that. Washington allows the third-most fantasy points to opposing forwards.

PG has scored at least 41.75 fantasy points in four straight games and five of his last six. With Kawhi Leonard presumably out, George should be a safe fantasy play against Cleveland.

Harrell has scored at least 42.25 fantasy points in each of the last three games Kawhi Leonard has missed. Harrell has struggled in his last four games, so he is risky, especially if Marcus Morris plays.

Embiid is available for Sunday’s game after he played just 16 minutes Friday before exiting with neck tightness. If Embiid plays his full complement of minutes, he should have a huge game against a Bulls team that does not have anyone who can match up with him physically.

The Rockets have gone all-in on small ball, and Gobert should be able to punish them, especially on the glass. The risk here is that Houston is able to run him off the floor, and force the Jazz to go small as well. There are better options for cash, but Gobert has 20-20 upside. 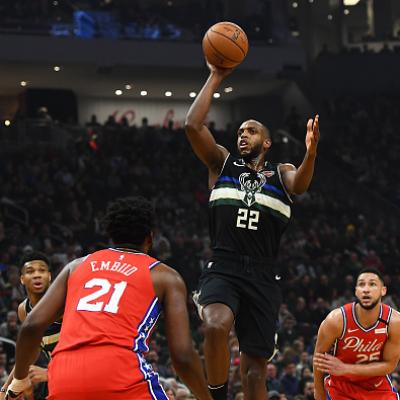 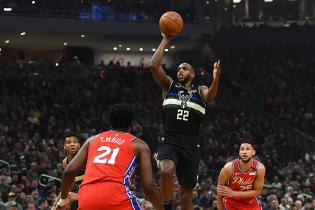 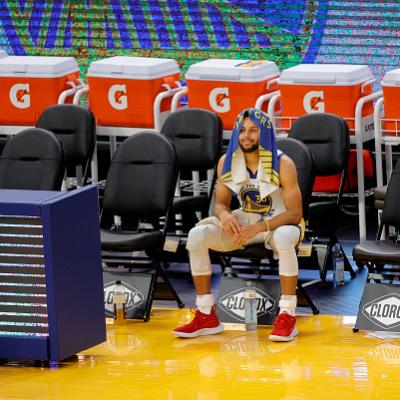 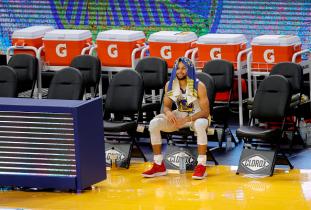 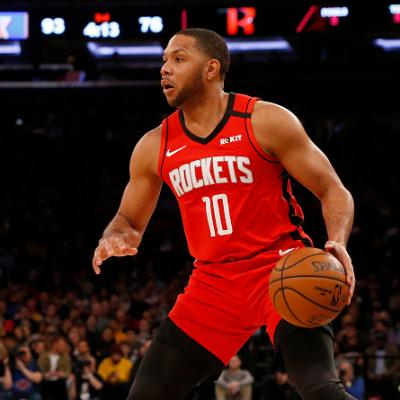 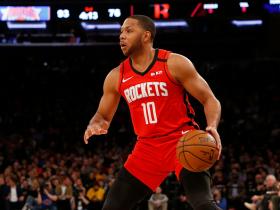 C. McCollum - SG
POR
C.J. McCollum has a fractured left foot and will miss an extended period of time (at least four weeks), according to Shams Charania.
The news flow this season has been nothing short of depressing and you can add McCollum to the list. Gary Trent Jr., Derrick Jones Jr., Rodney Hood and Anfernee Simons are all going to benefit from this awful news and despite Trent Jr.'s awful Monday, he looks to be the guy to grab here. And if he's not available, Jones Jr. or Hood should be the next targets on your list. McCollum was in the midst of his best season and this news is horrible for fantasy managers and the Blazers, alike. Additionally, Damian Lillard's usage is going to rise and Robert Covington and Carmelo Anthony are also going to see a boost in usage.
Added 2:10 am (EST)
Added 2:10 am (EST)

C. McCollum - SG
POR
C.J. McCollum is going to be out for at least a month after suffering a fractured left foot on Saturday, Jan. 16 vs the Hawks.

E. Paschall - PF
GSW
Eric Paschall had his best shooting night of the season on Monday, hitting 8-of-11 shots en route to 19 points, four boards, three assists and a steal.
Paschall matched his season-high scoring mark against the LA and the eight made shots were a season best for the second-year forward. He didn't make a triple in the game, but his eight points in the final frame helped the Dubs get a win over LeBron James and the Lakers. Paschall is only rostered in 11% of Yahoo leagues and is worth a look in deep leagues.
Added 1:09 am (EST)
Added 1:09 am (EST)

A. Wiggins - SF
GSW
Andrew Wiggins was ultra-efficient on Monday, hitting 7-of-11 field goals and 3-of-5 threes to finish with 18 points.
Wiggins had it going in the third quarter when he scored 12 of his 18 points including nine in a row on three straight 3-pointers. He also chipped in three rebounds, an assist and a steal in 32 minutes in what was his second-best shooting night of the season.
Added 1:01 am (EST)
Added 1:01 am (EST)

K. Kuzma - PF
LAL
Kyle Kuzma hit 6-of-11 shots and three 3-pointers for 15 points and 10 rebounds in 25 minutes off the bench on Monday.
Kuzma has double-doubled in two straight games and in three of his last four, despite playing sub-30 minutes in all of them. He's also hit a 3-pointer in seven straight games and in all but one game this season. Kuzma is rostered in just 42 percent of Yahoo! leagues and the Lakers play four games next week. He's worth a look if you need points, boards and 3-pointers.
Added 12:58 am (EST)
Added 12:58 am (EST)

D. Schroder - PG
LAL
Dennis Schroder caught fire early and hit 8-of-15 shots, a 3-pointer and 8-of-9 free throws for a season-high 25 points, five rebounds, three assists and two steals in Monday's two-point loss to the Warriors.
Schroder had a great first half and has ended up being a great point-guard complement to LeBron James in L.A. He's scored in double figures in all but two games this season and is returning 12th-round fantasy value this season. However, he could be better than that going forward as long as he keeps getting 30-plus minutes a game.
Added 12:54 am (EST)
Added 12:54 am (EST)

A. Davis - PF
LAL
Anthony Davis, as usual, played through his various ailments on Monday and racked up 17 points, 17 rebounds, seven assists, two steals and three blocks on 6-of-16 shooting in a 115-113 loss to the Warriors.
The triple-double watch was on early for AD after he racked up a bunch of assists in the first half, but he stopped passing the ball and finished up with seven dimes. His career high is nine and his lone triple-double of his career featured points, rebounds and blocks. Expect Davis to continue to show up on the Lakers' injury report and expect him to keep powering through it. The Lakers play Thursday, Saturday and Monday and then have a back-to-back next Wednesday and Thursday. Maybe AD sits in one of those, but it's also possible he could play in both of them.
Added 12:49 am (EST)
Added 12:49 am (EST)

K. Oubre - SF
GSW
Kelly Oubre scored a season-high 23 points vs the Lakers on Monday, hitting 9-of-18 field goals with four rebounds, two steals and two blocks in the win while also playing incredible defense against LeBron James.
After the win, Draymond Green said when Oubre is playing well the Dubs are a, "Completely different team -- because it's just another dominant option." Oubre notched season highs in scoring, field goals made and field goals attempted, and he did it in the Warriors biggest win against the defending champion Lakers. He continues to struggle from deep, however, making just 2-of-8 in the game, but he's now made at least two 3-pointers in three straight games, so it's not completely bad. Oubre will look to keep this going vs the Spurs on Wednesday. If Oubre was dumped in your league, run, don't walk, to go get him.
Added 12:38 am (EST)
Added 12:38 am (EST)