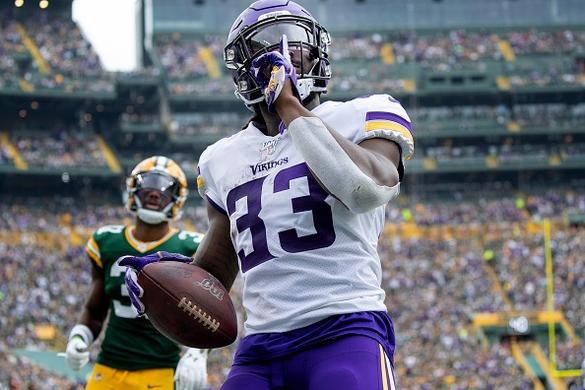 Both of my lineups came up just short last week. The Cash lineup got next to nothing from a surprisingly low-owned Drew Brees , while Sony Michel and Tyler Lockett sunk my GPP lineup. Even though I didn’t find the right combination of players for Wild Card week, I found a lot of players I liked, and I feel like most of them did pretty well. This week, I’m finding it awfully difficult to find more than three players I like at any given position. The obvious defenses to attack are Houston and Seattle, but it’s had to put too many Chiefs and Packers in your lineup, especially when guys like Aaron Jones , Tyreek Hill , Davante Adams and Travis Kelce have little to no multiplier. Because there aren’t enough guys I really trust, we’re going to try to get back on the board with a GPP lineup this week.

I understand why Mahomes has a significant multiplier and Lamar Jackson doesn’t, but Mahomes has a much better matchup. I think it’s awfully close, especially for cash lineups, but the multiplier puts Mahomes on top for me.

I still think Minnesota’s secondary is vulnerable, especially deep, and while Drew Brees couldn’t take advantage, I think Jimmy Garoppolo can. I don’t think I’m playing any quarterback outside of Jackson and Mahomes for cash games, but Garoppolo has an awfully high ceiling when you consider the multiplier.

Cook probably has a slightly tougher matchup than Henry, Ingram and Mostert, but I think his multiplier is more than enough to make up for it.

Williams was great in his two games since returning from injury, and while I don’t really trust it to continue, I love his huge ceiling and multiplier. He’s a must for GPP lineups, and I’ll consider him for cash thanks to the multiplier.

Lynch has scored touchdowns in both of his games since returning to the Seahawks, and Pete Carroll says he is ready for more work this week. I don’t necessarily believe it, but it could mean he has a higher ceiling to go with a pretty nice matchup. I prefer Damien Williams , but I may wind up playing them both.

I think Adams is the safest receiver on the slate. He has five touchdowns in his last six games, and Seattle’s defense is not good.

I don’t usually like playing a guy coming off of his career game, though in Metcalf’s case, it helps that his multiplier is still significantly higher than Tyler Lockett ’s. I think the Packers can be susceptible to deep plays, especially in Play Action, and as we saw last week, Metcalf is fully capable of making big plays in big games.

I’m a little concerned about this matchup, but Hopkins is too good to have a lower multiplier than Tyler Lockett , Adam Thielen and Deebo Samuel.

I don’t understand why Sanders’s multiplier is so much higher than Deebo Samuel’s. Sanders has been inconsistent down the stretch, but the week off should have helped him heal up, and I think he could have a huge day against Minnesota’s secondary.

All things being equal, I probably like Mark Andrews slightly better than Kittle and Kelce, but it’s so close, we may as well take the multiplier.

If you’re going to skip one of the big three tight ends, you may as well go with Rudolph. You can’t really count on him getting many looks, but he is always a red zone threat.

T. Howard - OT
HOU
Howard (knee) is progressing well in recovery and should be ready for the offseason program, Drew Dougherty of the Texans' official site reports.
For a full breakdown and detailed player analysis GO PRO and join the Fantasy Alarm Family! CLICK HERE to unlock your PRO package and take advantage of instant savings!
Added Yesterday 9:25 pm (EST)

M. Stafford - QB
DET
General manager Bob Quinn said Stafford (back) is healthy and the quarterback will be full go for the start of the offseason training program, Tim Twentyman of the Lions' official site reports.
For a full breakdown and detailed player analysis GO PRO and join the Fantasy Alarm Family! CLICK HERE to unlock your PRO package and take advantage of instant savings!
Added Yesterday 5:51 pm (EST)