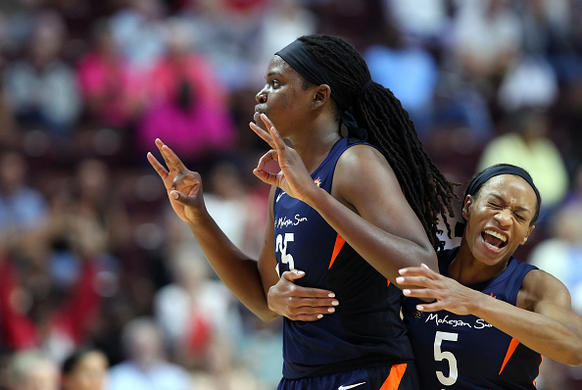 One of the reasons I love WNBA DFS is that you don’t have to worry about the weather. I get frustrated with MLB DFS because you have to constantly worry about rainouts, especially early in the season. I am too stubborn to bench someone I like because his game might get rained out, which inevitably leaves me taking a zero at some point.

That isn’t supposed to be the case for basketball, but as we have occasionally seen in both the NBA and WNBA, stuff happens. Friday’s Mystics/Aces game was canceled after the Aces experienced problems with their scheduled flight. While I can’t pretend my lineups definitely would have cashed had the two teams played, I did have six players in my Playbook from that game, so it hurt a little bit.

All four games on Sunday’s schedule should go off without a hitch, but the split schedule is still causing a bit of drama. While DraftKings is offering a full four-game slate Sunday, Fan Duel has decided to offer two two-game slates instead. As always, the DraftKings optimal lineups below are for the main slate. Rather than making two lineups for FanDuel’s main slate, I decided to do one GPP lineup for the early slate and one GPP lineup for the late slate. That being said, I like both of my FanDuel lineups for cash as well, though I would probably make one or two changes.