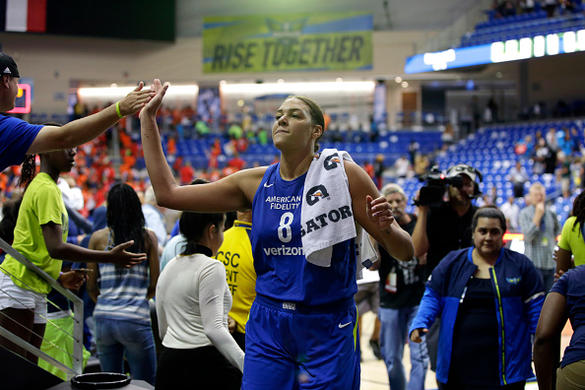 We have three games on the WNBA schedule Friday, and it is remarkable how different they are. In the early game, the Connecticut Sun host the Seattle Storm in a matchup of potential playoff teams. Seattle enters this game with the best record in the league, while Connecticut is just 1.5 games ahead of Las Vegas for the final playoff spot. The Sun, however, are 6-3 at home and have won two of their last three games. This should be a fun game.

Under normal circumstances, Dallas vs. Chicago would probably be less fun. Only Indiana has fewer wins than the Sky this season, while Dallas is 14-9 and a league-best 8-2 over their last 10 games. They also have an MVP candidate at the absolute peak of her powers. Liz Cambage has scored a WNBA-record 88 points over her last two games, and she has thrown in 27 rebounds for good measure. Of course, 33 of those points and 17 of those rebounds came Thursday night in Dallas, which is where this gets interesting. Dallas goes to Chicago for the second of a back-to-back, and four Wings starters, including Cambage, played 34+ minutes Wednesday. For as bad as the Sky have been, they are 5-7 at WinTrust Arena, and I think at the very least this game will be competitive.

It is far more difficult to argue the third game of the night will be competitive. Indiana has lost both of its games against Los Angeles this season by at least 17 points, and Candace Parker didn’t even play in the game at Indiana. The Sparks are expected to be without reigning Defensive Player of the Year Alana Beard, but even so, there is no reason to believe Indiana will pick up its third win of the season. If they are to have any chance, they probably need rookies Victoria Vivians and Kelsey Mitchell to both get hot from beyond the arc. They are certainly capable, but that’s asking an awful lot against one of the best defensive teams in the league.