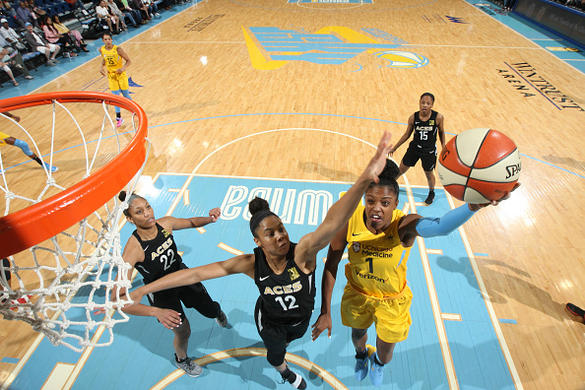 Friday’s three-game WNBA slate is a tricky one, for a few reasons. First of all, FanDuel is not offering a full three-game contest. They are opting to offer a two-game contest for the just the two night games. DraftKings, however, is including the afternoon game in their main contest. For that reason, we will include players from the Atlanta Dream and Las Vegas Aces in our Playbook. If you play on FanDuel, you can always include those players in a single game Showdown entry.

Another complicating factor, as it often is for the WNBA, is injuries.  While Thursday’s DK Cash lineup performed well, the other lineups suffered in part due to Elena Delle Donne’s return from an illness Thursday. I might not have played Tianna Hawkins or Ariel Atkins had I known EDD was set to return. We could have a similar situation Friday with Stefanie Dolson and Allie Quigley both being listed as questionable for the Chicago Sky. To make matters even worse, the Sky play in the late game Friday. While I could have taken Tianna Hawkins and Ariel Atkins out of my lineups had I been paying attention instead of attending the Cubs game at Wrigley Field, you probably won’t have that option (especially on FanDuel) since the starting lineups likely won’t be announced until well after the second game has started.

The last wrinkle in Friday’s slate is Glory Johnson and Aerial Powers’s return to the Wings. Johnson was mostly an afterthought offensively in the first game of the season before she got hurt, and it remains to be seen how she fits next to Liz Cambage. Ideally, Johnson would play all of the center minutes while Cambage is out so that she could operate at least a little bit without anybody clogging the paint. I don’t think Johnson is usable for DFS until we see her have success next to Cambage or until her price goes down. Unfortunately, Johnson’s return probably renders Kayla Thornton unplayable as well. Thornton played just nine minutes in the first game of the season, and even if she starts Friday, we can expect her minutes to plummet as most of them go to Glory Johnson.