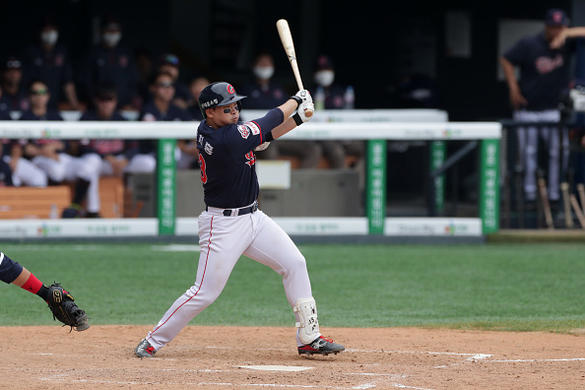 During these uneasy times, being able to focus on some baseball provides some solace. A wild day in the KBO ensued this morning on a slate perceived to favor pitching. Instead, the five games yielded 84 runs with 42 of them courtesy of the 47 innings logged by the bullpens. Only 34 of the runs ended up being earned but the cumulative bullpen ERA on Sunday finished at 6.51 fueling the three run totals in the double digits.

No definitive news on why Roberto Ramos of the LG Twins left his contest early, but DFS players will be monitoring this situation closely since he leads the KBO with 10 home runs through his first 23 games. In other roster news, SK Wyverns newly acquired catcher continues to make a positive impression:

Lee Heung-ryun was traded to SK three days ago, he hit a home run yesterday in his debut for SK and hit another one today for them.

MBC Sports with the call... pic.twitter.com/9IHoh7lmI8

Lee homered in back-to-back games for the Wyverns who moved out of the basement of the standings sweeping Hanwha and winning their last four games in a row in the KBO. In other roster news, Kiwoom could be mining the wave or roster cuts in the MLB for a power hitter to replace the released Taylor Motter :

At a time when hundreds of @milb players are being released, there's an 'opening' at #KiwoomHeroes. Heroes' manager Hyuk Sohn said position is not really factor, but would like to bring in "a player that can hit baseball far." Search is on! #KBO

It will be interesting to see if the Heroes can make the best of a tough situation but transitioning to a new culture and team can be difficult. With this in mind, here’s the game action from Sunday encapsulated in the Round Up.

Although runs littered the landscape on Sunday, Chang-mo Koo of the NC Dinos continued his strong season tossing six shutout innings in Samsung giving up one hit and a walk with six strikeouts. He moved to 4-0 supported by 18 runs scored by his teammates and Koo’s registered five quality starts in as many turns so far. Koo leads the KBO in ERA (0.51), WHIP (0.60) and strikeouts (38). Pretty, pretty good.

During a no-decision, Dan Straily worked five innings allowing seven hits, one earned run and a walk with five strikeouts. This bodes well for Straily pitching well on the road as he assimilates to the KBO. Through his first 33.1 innings, he owns a 2.70 ERA, 1.32 WHIP and 37:15 K:BB.

This puts a bow on week three of the KBO with the Dinos still atop the league by two wins over the LG Twins. With a race on tap for Sunday, be sure to check in on all of Dan Malin and Matt Selz’s work before delving into NASCAR DFS. And as always, stay with Fantasy Alarm to remain ahead of the competition. Be safe and be well.