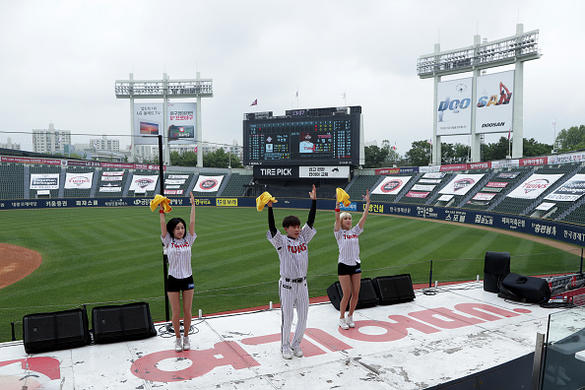 In an unlikely reversal of fortune, Samsung benefited from some late inning magic with a walk-off win over the first place NC Dinos on a pinch hit single against the KBO’s league leader in saves:

19-year-old Park Seung-gyu comes up with his first career walk-off hit and the Dinos 5-game winning streak is now extinct.

After a slow start, Samsung’s won three straight and its import hitter Tyler Saladino could be heating up as well going 2-for-4 with a run on Friday. Saladino moved his modest hit streak to three games. Noting the KBO differs from the major leagues, Kia sported these jerseys:

Contrary to belief on Twitter, they do not represent margarita’s on a Friday. Rather, Ramsar’s a project to protect wetlands in South Korea. With all five games taking place, it’s time to recap them in the Round Up.

Representing Kiwoom’s stopper in the staff, Eric Jokisch snapped the team’s four game losing streak firing seven strong innings giving up five hits, one run (zero earned) and a walk with nine strikeouts. Jokisch moved to 4-0 on the year tied for first in wins in the KBO and second in ERA (0.90) with a minuscule 0.87 WHIP in a league predicated on contact.

Dinos starter Drew Rucinski received a no-decision as a result of the Samsung rally. Rucinski tossed seven innings allowing six hits, three runs (two earned) and struck out seven. Perhaps staying in a bit long, Rucinski served up three straight hits starting the top of the seventh leading to three runs. Still, he owns a 30:7 K:BB through 32.1 innings this season with a 2.51 ERA and 1.18 WHIP for NC with three wins.

Woo-chan Choi evened his record at 2-2 working six innings yielding six hits and one earned run with five strikeouts for the LG Twins.

Tae-hoon Kim notched his first win of 2020 logging five innings ceding five hits, two earned runs and two walks with three strikeouts for the SK Wyverns. His bullpen almost blew it late but held on for an 8-6 victory.

Pitching to contact in the KBO plays to Raul Alcantara ’s arsenal and he won his fourth game of the year in five decisions for Doosan. He threw six innings allowing nine hits, two earned runs and three walks with four strikeouts. His ERA moved to 3.90 but his 1.47 WHIP without many strikeouts caps his upside in DFS contests.

In what seems like an almost daily occurrence, Roberto Ramos homered in an LG Twins win:

He’s homered in four of his last five contests, leads the KBO in home runs with 10, slugging percentage (.827), total bases (62), on-base plus slugging percentage (OPS - 1.280) and moved to third in RBI (21) through 21 games this season. In a league where many pitchers try to keep the ball down, this plays to Ramos’ strength evidenced by the chart in this tweet:

#LGTwins Ramos is tearing apart #KBO pitching as he just hit his 10th HR of the season. How is he doing this? He is crushing anything that comes near lower part of the zone. (Pitcher’s PV / SLG) #statiz pic.twitter.com/85myPUX5mv

Most impressive, Ramos’ ability to drive the ball to the opposite field makes him a monster in the KBO hitting .373 in his first 86 plate appearances. His teammates also chipped in during the Twins fifth straight win:

Speaking of hot, Sung-bum Na left the yard once again on Friday:

Na Sung-bum / ??? / follows yesterday’s 2 HR game to get another #DinoDinger! This man is on form with a 375ft whack for the #NCDinos.#MLB fans be watching this #KBO stud he could be coming to a ballpark near you soon!

He’s on a six game hit streak with 12 hits in his last 21 at-bats (.571) scoring seven runs with three doubles, three home runs, nine RBI and three walks. Na’s tied for the KBO lead in runs (20) and second in home runs (7). During a loss, these Dinos also shined:

It’s been a strong week for Jeong Choi and he also hit his first home run since May 8th on Friday:

#SKWyverns 3B Choi Jeong Gets the scoring started tonight with a solo shot to CF #KBO
1-0 Wyverns pic.twitter.com/URgPD9iJsr

Choi finished 2-for-4 with two runs, his second home run and drove in two. This week he’s racked up multiple hit games in three of four contests going 6-for-12 with two doubles, the home run, five RBI and walked five times. Still below the Mendoza line (.191 average), Choi’s on the upswing for a struggling Wyverns squad desperate for his power. Suring to eight runs, here’s the other notable performances from Friday by SK’s hitters:

Looking ahead to Saturday, four games will count in the main slate of DFS excluding the LG Twins at Kia Tigers tilt starting three hours earlier than the other contests. A battle of import pitchers looms in Samsung with David Buchanon facing the NC Dinos’ Mike Wright . Ricardo Pinto owns one win so far and it came against Hanwha who he’ll face again on Saturday. Be sure to stay with Fantasy Alarm to remain ahead of the competition.

Also, more good news for KBO fans with this announcement by ESPN:

Coffee and the KBO continues to be a necessary escape during these tumultuous times.

C. Wilcox - SP
SD
Padres added RHP Cole Wilcox to their 60-man player pool.
The Padres lured Wilcox away from returning to Georgia by giving him a third-round record $3.3 million signing bonus. While he will be given a chance to start over the long haul, it's possible the Padres could view him as an option for the bullpen this season.
Added 12:28 pm (EST)
Added 12:28 pm (EST)

E. Rodríguez - SP
BOS
Eduardo Rodriguez is not in Red Sox' summer camp after being around someone who tested positive for COVID-19.
Rodriguez remains at his home in Florida and is still awaiting his test results to see if he has also been inflicted with the virus. Red Sox manager Ron Roenicke noted Friday that the team has "some positive tests," but he didn't offer other specifics.
Added 12:05 pm (EST)
Added 12:05 pm (EST)