Greg Jewett takes an in-depth look at Mike Clevinger and lets fantasy baseball owners know what to expect from the Cleveland Indians starting pitcher during the 2020 MLB season. 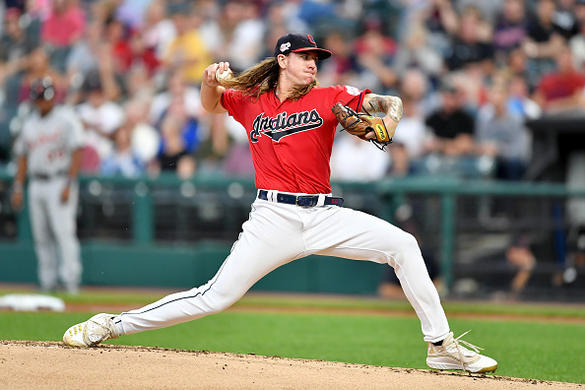 Late season trades can haunt fanbases. On August seventh of 2014, the Los Angeles Angels traded a pitcher in Class-A for reliever Vinnie Pestano. Cleveland worked its magic on Mike Clevinger culminating in a career year in 2019 in which he went 13-4 with 169 strikeouts against 37 walks over 126 innings with a 2.71 ERA, 3.09 ERA and 1.06 WHIP in perhaps the most hitter friendly environment on record. He missed with time with two separate injuries, an upper back strain and a sprained ankle.

Prior to his back strain, Clevinger notched 12 shutout innings with 22 strikeouts against four walks. Upon his return, he suffered an ankle injury in June sidelining him again. However, it’s what Clevinger accomplished between July 3rd through September 24th. Within these 102 innings, Clevinger won 12 of his 13 decisions with 134 strikeouts against 25 walks, a 1.76 ERA and 1.02 WHIP. His strikeout percentage rose to 33.6 percent with a .212 batting average allowed, 2.27 FIP and 2.98 xFIP.

What fueled Clevinger’s breakout presents the root of this profile. It starts with adding velocity to his four-seam fastball. In 2017, Clevinger averaged 92.5 MPH with the pitch which increased slightly to 93.6 MPH in 2018 and spiked to 95.4 MPH last season. Although he only made 21 starts, it’s worth noting the added speed to the pitch. He also used fewer change-ups, possibly due to the lower seams on baseballs in 2019 while ramping up his slider usage. These adjustments yielded his strikeout percentage growth to 33.9 percent. Here’s his pitch plot from last year courtesy of Statcast:

Clevinger’s arsenal allowed him to work well both in and out of the strike zone. This, along with his increased fastball velocity contributed to his breakout. In an effort to discern how his pitches fared, check out their expected numbers with expected batting average (xBA) and expected weighted on-base average (xwOBA) plus strikeout percentage along with whiff percentage:

For perspective, building on the first chart, Clevinger’s swings and misses from 2019 by pitch:

Using his fastball more than 50 percent of time helped Clevinger work ahead on the count and he owned the shadow zone displayed here on Statcast’s swing and take chart:

Clevinger owned the third best swing and miss rate with his four-seam fastball and the fourth best slider according to MLB.com’s end of season game notes. Brooks Baseball provides a glimpse of how he used these two pitches in 2019: 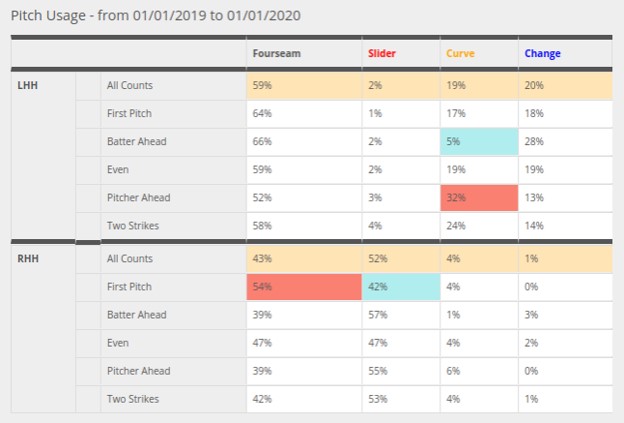 When ahead in the count versus left-handed hitters, Clevinger used his curve but relied on the slider against right-handed batters. Beneath all of this, Clevinger increased his whiff percentage by 7.4 percent on Statcast while his swinging strike percentage on Fangraphs rose to a career best 15.2 percent. He reduced contact to 66.7 percent, down 7.4 points compared to 2018 and decreased Z-Contact (in the strike zone) by over six percent.

Although the Twins and White Sox continue to strengthen their lineups, Mike Clevinger still rates as one of the top pitchers in fantasy going forward. Everything looked great for him heading into drafts until this:

Indians says Mike Clevinger should be back in the big-league rotation in 6 to 8 weeks following Friday's surgery on his left knee.

Now fantasy owners will need to determine if Clevinger’s worth the risk. Here’s his projection:

Prior to Cleviger’s surgery, his projection of 197 innings rated just below the elite with 200 inning or more. Injury issues aside from 2019, Clevinger’s breakout appears sustainable assuming his fastball velocity gains stick and his arsenal continues to evolve. With pitching prices escalating in fantasy, one must adapt to the new environment. There’s some risk with Clevinger compared to his price point, and guessing his price does not drift too far as a result of the surgery. If he finishes closer to an ERA near three using his 3.09 xFIP from 2019 as a reference point, Clevinger’s THE BAT projection will be the basis for the Clevinger believers. For owners looking to target two aces early, Clevinger makes for an intriguing investment with some upside still untapped, especially if he comes with a discount.

G. Torres - SS
NYY1
Gleyber Torres left Thursday's game with lower back stiffness.
Torres will be reevaluated tomorrow according to the Yankees. The 24-year-old shortstop should be considered day-to-day for the time being.
Added 9:10 pm (EST)
Added 9:10 pm (EST)

A. Slegers - RP
LAA
Angels optioned RHP Aaron Slegers to Triple-A Salt Lake.
The right-hander was recalled on June 15 and tossed one inning, allowing one run on two hits and a walk. Slegers goes back to Triple-A with a 6.43 ERA and 1.90 WHIP over 21 innings this season at the major league level.
Added 8:14 pm (EST)
Added 8:14 pm (EST)

E. Escobar - 3B
ARI1
Eduardo Escobar went 2-for-4 with a double, triple, and two runs scored in Thursday's loss to the Giants.
The 32-year-old is batting just .245 this season with a .295 on-base percentage but has blasted 15 home runs and 10 doubles over 265 at-bats. The veteran infielder is a likely candidate to be traded this summer as the Diamondbacks continue to fall deeper and deeper into the cellar.
Added 8:01 pm (EST)
Added 8:01 pm (EST)

Z. Gallen - SP
ARI1
Zac Gallen allowed four runs on four hits and a walk over 2 2/3 innings to take the loss on Thursday as the Diamondbacks fell to the Giants.
Gallen was unlikely to go deep into the game regardless of how he performed after throwing just 36 pitches in a simulated game last Saturday, but the right-hander was certainly hoping for better results in his return from the injured list. Arizona has now set the modern-day MLB record for 23 consecutive road losses. Hopefully, the Diamondbacks' ace is able to knock off the rust when he takes on the Brewers next week at home.
Added 7:48 pm (EST)
Added 7:48 pm (EST)