**FREE PREVIEW** Greg Jewett takes an in-depth look at Fernando Tatis, Jr. and lets fantasy baseball owners know what to expect from the Padres shortstop during the 2020 MLB season. 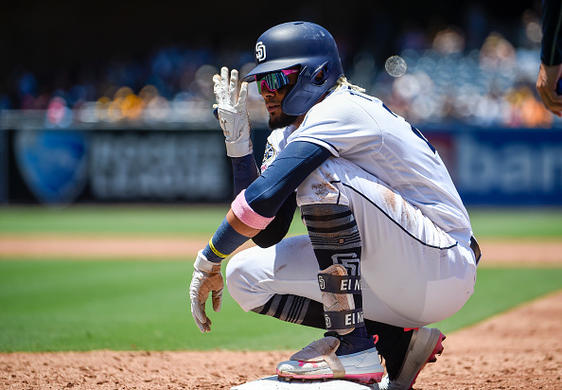 Fernando Tatis Jr. burst onto the scene with highlight reel plays at shortstop, mashing home runs and stealing bases, padding his fantasy owners counting statistics. Unfortunately, a back injury cut his season short on August 13th. As of games played through that final day, Tatis Jr. led all major league rookies in on-base plus slugging percentage (.969), slugging percentage (.590) while ranking second in on-base percentage (.379), average (.317) and stolen bases (16). His 22 home runs as a shortstop before turning 21 set a new record. He also joined Nomar Garciaparra as the only rookie shortstop to record at least 20 home runs along with stealing at least 15 bases.

All of this in spite of missing the last 77 games of the season due to injury. Tatis Jr. represents an anomaly for fantasy. His ceiling could eclipse many players in the first round but the risk of investing in Tatis Jr. depresses his draft stock to the second round. Why? Well, here’s his games played by season since his debut in 2016:

Within all of his teeming upside, Tatis Jr.’s only played more than 100 games once in the last four seasons. This will be something to take note of. This resonated in the poll ran on Twitter as well based on his Steamer projection:

Fernando Tatis Jr. #Padres will be my next profile for @FantasyAlarm which Steamer projection makes you most nervous for 2020? Taking the over or under on any? Please respond below

Extrapolating what Tatis Jr. did in 2019 over a full season proves frivolous. Determining his floor compared to his ceiling will ultimately decide his fate for 2020. However, in order to arrive at these findings, Tatis Jr.’s batted ball data, health and plate discipline will also be factors. Due to his wide range of outcomes, comparisons with two of his peers will appear as well. Time to dive in.

Last season, Tatis Jr. finished with a 15.6 swinging strike percentage, 67.1 contact rate, 31.8 O-Swing (swings and misses outside the strike zone) percent and Z-Contact (in the strike zone) of 80 percent. Javier Báez owns a similar profile in regards to discipline with Tatis Jr. but with a longer track record. Over the last three years, Baez owns an 18.6 swinging strike percentage, an identical 67.1 contact rate, a 44.9 O-Swing percentage and 79.8 Z-Contact percent. Basically, Baez swings and misses more, especially on pitches outside the strike zone.

In regards to walk percentage, Tatis Jr. already displayed a higher walk percentage (8.1-percent) in his debut compared to Baez the last three years (5 percent). It’s also worth noting Tim Anderson won the American League batting title with a walk percentage of 2.9-percent while striking out 21-percent of his plate appearances. Can this sort of production be proliferated by all three shortstops, it remains to be seen. But, it’s worth noting nonetheless and it’s intriguing to see Tatis Jr.’s swing and take chart courtesy of Statcast:

One can see his aggressiveness, especially in regards to swinging versus taking a pitch in the heart of the strike zone. He did struggle a bit in the shadow zone of the chart. Shifting to Statcast, Tatis Jr. racked up 76.9 zone contact percentage with a 42.3 chase contact rate. He also topped the ball in 34.4 percent of his batted ball data. Once again, these coincide with Baez tendencies. Baez finished last year with a 75.2 zone contact percentage, 50.9 chase contact rate and 38.2 topped percentage. It’s mind boggling how identical they align.

Once again, the batted ball data will bounce between two sites along with some comparison to Tatis Jr.’s peers. Starting with his 84-game breakout from 2019, Tatis Jr. recorded a 22.4 line drive percentage, 46.6 ground ball percent, 30.9 fly ball percentage, 31.9 home run per fly ball rate while pulling the ball in 41 percent of his balls in play and a 41.9 hard hit percentage. Perhaps more remarkable than Tatis Jr. owning a higher home run per fly ball percent than fly ball percentage, his .410 batting average on balls in play (BABIP). No other player with at least 350 plate appearances last season notched a BABIP over .400 other than Tatis Jr. Of course, Anderson came close with a .399 BABIP fueling his .335 average. Keep in mind, Tatis Jr. hit .317 in 2019 with an impressive on-base percentage just under 38 percent. Can it be repeated, it seems like it’s almost impossible. Looking back to 2018, only Jorge Alfaro owned a BABIP over .400 with at least 350 plate appearances.

Tatis Jr. hit 16 of his 22 home runs against fastballs. Staying atop the batting order should help him see a steady diet of them to avoid letting him get on base via a free pass. Do not forget, Tatis Jr. owns a 29.3 feet per second sprint speed with ranks 32nd in the majors. Before delving into Tatis Jr.’s expected statistics, here’s his spray chart from 2019 with the Padres: 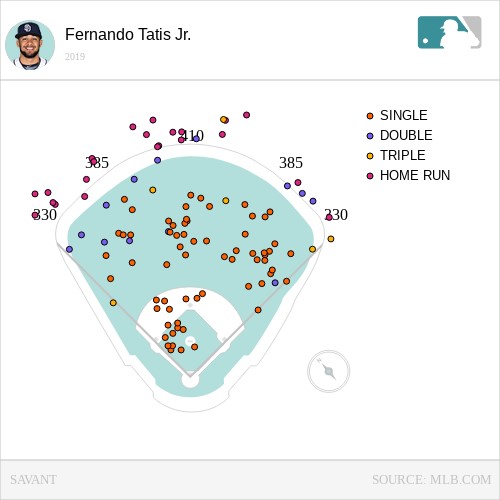 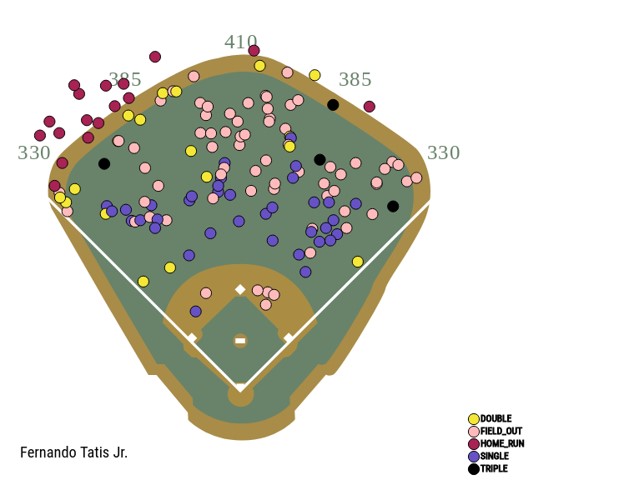 It’s apparent Tatis Jr. relied on his pull field at Double-A. In 104 total games at the level across two years, he slashed .283/.351/.482 with 85 runs, 17 home runs, 49 RBI and 20 stolen bases over 413 at-bats. This could be a template for future projections for Tatis Jr. Speaking of template, check out the similarity of Tatis Jr.’s heat map in the minors for two seasons when viewed against the heat map tallied by Baez the last three years: 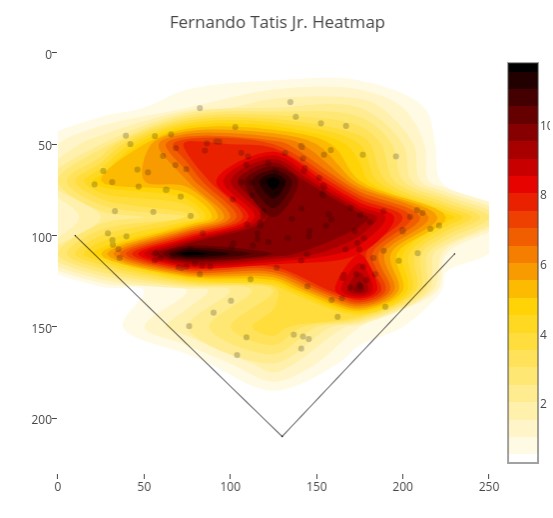 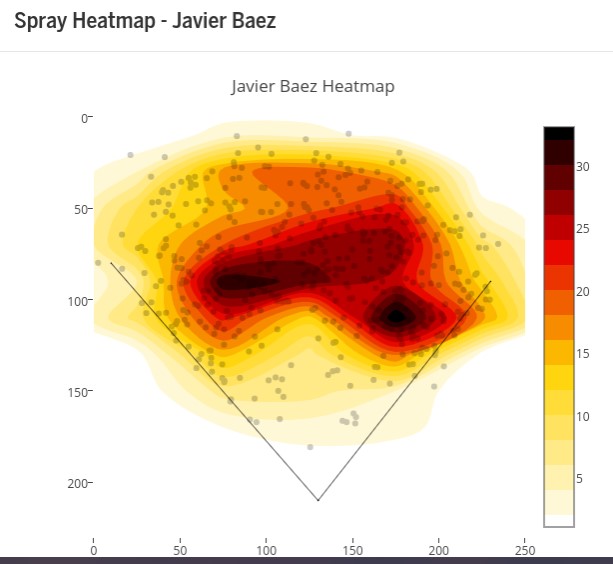 To quote C.C. and the Music Factory, things which make you go hmmmm….

Knowing all of the factors involved in projecting a player, Fernando Tatis Jr. probably overachieved last year in regards to his actual statistics compared to his expected. But players like Javier Báez and Tim Anderson prove capable of carrying over numbers despite forecasts of pending migration to the mean. Personally, the biggest wild card in figuring out a way to predict what Tatis Jr. will do in 2020 comes down to how many games will he play? His lack of a healthy background puts him in line with Carlos Correa , a player with a high ceiling capped by his inability to stay on the field. Herein lies the rub. This resonates in the two available projections so far on Tatis Jr. by Steamer and ZiPS (note ZiPS did not include games played):

In 2019, Tatis Jr. accrued 334 at-bats, so the ZiPS should be around 100 games figuring around 3.75 at-bats per contest as a measure since Tatis Jr. could hit leadoff. Due to the high ceiling Tatis Jr. possesses, he will not come at a value in drafts. In fact, he’s not for the risk averse but for owners looking to push in all the chips, Tatis Jr. represents the ultimate risk versus reward player in 2020. There’s a scenario Tatis Jr. could come close to attaining the counting statistics projected by Steamer with the slash line forecast by ZiPS. If so, he’s an absolute bargain. Drafts do not get lost in the first round, but it can change how one rounds out a roster.

Due to the bevy of hitters available later in drafts, a replacement player of value may exist in 12-team mixed leagues if an injury occurs to Tatis Jr. So, less risk. In 15-team formats or draft and hold ones, Tatis Jr. becomes more volatile. Never pace out a player’s numbers from a shortened season to a full one. Fernando Tatis Jr. owns a plate discipline skillset Javier Báez continues to outperform through the years. Taking an aggressive player with swing and miss in his game does not come with the stigma it used to. Tatis Jr. could win or lose a league depending on if he plays 100 games or 150. How about spending on a 130 game season with 27 home runs, 20 stolen bases and a .280 average with an on-base percentage of 35-percent. If he does reach the 150 game threshold, Tatis Jr. could finish as a top-five player in fantasy. Invest with eyes wide open. If one likes bold, the beat writer for the Padres, Dennis Lim of The Athletic, predicts the first Padres 30 home run and stolen base season by Tatis Jr. with a .285 average. Use ZiPS as the floor and 30/30 as the ceiling. Along with anything in between capable of happening. Baseball’s a helluva drug.