Fantasy Baseball Daily Round Up: September 28 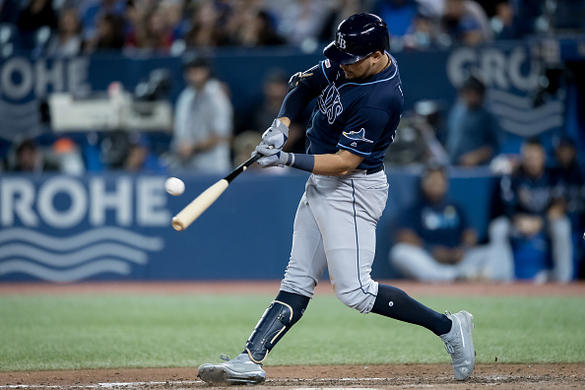 After tracking the evolving playoff races all September, the landscape crystallized last night. In the American League, Houston clinched home field advantage during a shutout win over the Angels and both Wild Card spots were secured when Cleveland lost in Washington despite Oakland losing in Seattle:

Tampa Bay moved into a tie with Oakland to host the play-in game defeating the Blue Jays:

Six-year drought … OVER.@RaysBaseball are back in the postseason! #CLINCHED pic.twitter.com/oWeqDrWAhg

It’s tough for Cleveland to miss the postseason. However, one cannot overlook the story of Carlos Carrasco and this article in his own words reminds all of us of the human nature of the sport:

When he received his diagnosis, @Cookie_Carrasco didn't give much thought to the idea of a worst case scenario.

Instead, with the support of his wife, family, and team, Carlos put up the fight of his life!

Might want to have a box of tissues nearby ...https://t.co/BoJxDYSGWl

In the National League, both Milwaukee and St. Louis lost with the Cardinals maintaining a one game lead in the Central division. Washington racked up its sixth straight win and only needs one more win or a Brewers loss to clinch home field advantage in the play-in game. Stay tuned.

As for the individual accolades from Friday night, Pete Alonso once again takes center stage launching his 52nd home run and securing his place in history with an eye on owning the record outright with two more games on the docket:

The ??????’s historic season just keeps on getting better. pic.twitter.com/KyG1dnuP88

Alonso tied Aaron Judge hitting his 52nd home run of the season tying the major league mark for a rookie in a season. Plus, Alonso’s the eighth player in Mets history to score at least 100 runs while driving in as many. He also tied the team record for walks in a rookie season (72) and accrued 84 extra-base hits this year. And his genuine excitement makes him an easy player to root for:

“I was so happy, I almost cried to be honest with you.”

Other top performances from hitters include Kevin Newman hitting two home runs, including the walk-off winner driving in five runs. As a leadoff hitter this year, Newman owns a .331 average with 51 runs, 11 home runs and 45 RBI in 73 contests.

No surprise the Yankees crushed six home runs in a visit to Texas. Giancarlo Stanton finished a perfect evening at the dish going 3-for-3 with his third home run, three RBI and walked twice. Cameron Maybin (11), Brett Gardner (28), Gio Urshela (21), Mike Ford (12) and Austin Romine (8) also homered putting New York atop the major league in home runs as a team.

Sparking a win by the Cubs in St. Louis, Ian Happ hit two doubles and his ninth home run driving in two runs. He’s racked up eight RBI over his last six games.

Remaining well below the radar, Matt Olson launched his 36th home run driving in two in Oakland’s Wild Card clinching loss. Olson’s averaging a home run every 13.3 at-bats this year with 36 home runs and 91 RBI in only 126 games. An eyes wide open sleeper at a potential reduced cost in drafts for 2020.

With most focusing on who will win the Cy Young Award in each league, September can also be a time when emerging young arms exhibit their talents as last round fliers for the next fantasy season. One such arm could be Austin Voth. He’s not particularly young at 27 years old, but he notched his second win of the year with six strong innings against Cleveland giving up two hits and two earned runs with five strikeouts. Since his promotion on September second, Voth owns a 1.56 ERA with 24 strikeouts versus seven walks in 23 innings. He also did not issue more than two walks in 16 straight starts in the minors prior to his recall. In this outing, Voth generated 10 swinging strikes with 12 called for a 30.1 called plus swinging strikes (CSW) percentage.

Here’s the other notable pitching performances from Friday:

All season long, this column notes how dominant Liam Hendriks has been since ascending to the closer role in Oakland. However, last night he melted down working for the third straight game. Hendriks yielded three hits leading to two earned runs along with tossing two wild pitches en route to his seventh blown save and fourth loss of the year. Since he’s been lights out all year, it’s a blip on the radar. But fantasy owners will note Oakland’s heavy usage of Hendriks down the stretch with him logging 13.1 innings so far this month. Key on his 22:2 K:BB but like many relievers, Hendriks struggles in three consecutive outings.

Here’s the rest of the high leverage events from last night:

With Tampa Bay and Oakland tied in the standings, their games take on more importance to host the play-in game. Tampa will deploy a bullpen game in Toronto while Oakland sends Brian Anderson the mound in Seattle.

Since Washington only needs one win to secure home field advantage for the Wild Card, and will have Patrick Corbin pitching in search of his 15th win, Milwaukee should focus on winning the Central. St. Louis faces the Cubs with Adam Wainwright opposed by Cole Hamels while Gio Gonzalez will try to mitigate damage in Coors Field.

Be sure to stay with Fantasy Alarm across all fantasy formats to remain ahead of the competition and if this marks my last Round Up of the year, it’s been a blast.