Fantasy Baseball Daily Round Up: September 14 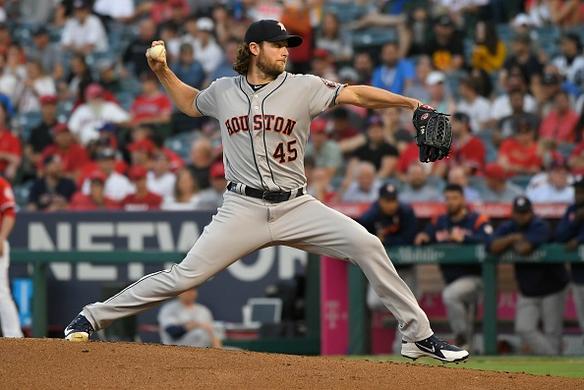 With many owners searching for saves off the waiver wire, Jairo Diaz and Shaun Anderson each recorded a save on Friday night. For Diaz, this marks his fourth save and third in the last four days for Colorado. He erased a lead-off single by Wil Myers in the top of the ninth inducing a double play groundout by Josh Naylor before striking out Luis Urías to end the game. Over It feels like my rotation on the Round Up coincides with each Gerrit Cole . For the sixth straight game, Cole accrued at least 10 strikeouts racking up 11 during a road win in Kansas City over eight innings. He yielded four hits, one run (zero earned) and two walks. Cole moved to 13-0 over his last 19 starts since May 27th with a 1.92 ERA, .172 batting average against and an eye popping 192 strikeouts in 126.2 innings.

Last night, Cole generated 19 swinging strikes with 25 called for a robust 43.6 called plus swinging strike (CSW) percentage. Here’s a sample of Cole’s evening highlighting the effects of his arsenal:

Here’s the other notable starting pitcher performances from Friday:

In seven appearances in September, Diaz owns a 7:1 K:BB without giving up a run in them.

Reports of Will Smith throwing before Friday’s game could end Anderson’s ascension to closing games for the Giants. However, he notched his second save on Friday night navigating around a hit and a walk with one strikeout. Anderson’s racked up 11 strikeouts in 6.1 innings this month with a save in each of his last two outings. Plus, in head-to-head leagues, he owns starting pitcher eligibility until Smith returns. Stay tuned.

On a quiet night across the saves high leverage front, Raisel Iglesias recorded his 30th save, Alex Colomé secured his 27th despite allowing two inherited runners to score and Roberto Osuna locked down his 33rd save. Toronto’s Wilmer Font garnered his fourth win with two clean innings versus the Yankees striking out three.

Helping the Cardinals extend their lead in the National League Central lead to five over the Brewers, Paul Goldschmidt launched two home runs, including a grand slam, en route to seven RBI.

Beneath the radar in Atlanta, Ozzie Albies hit his 23rd home run among his three hits in a win over the Nationals last night. He’s tallied multiple hits in four of his last five contests and recorded 52 such games this year. Due to his recent surge, Albies average sits at .293 with 13 games remaining.

With a flair for the dramatic, Bo Bichette continues to etch his name in the record books and in the hearts of Toronto fans:

It's close to midnight, and someone strong was lurking in the park ????‍?? #WALKOFF pic.twitter.com/M5EUqUUdoa

Through his first 41 games, Bichette ranks third all-time with 28 extra-base hits behind only Joe DiMaggio (30) and Ryan Braun (29). Cavan Biggio added two hits and an RBI for his third consecutive multi-hit game. Biggio’s also in the midst of a 16 game on-base streak with four doubles, three home runs, seven RBI, 17 walks and a .302/.479/.585 slash line.

Death, taxes and Khris Davis hitting for power in Texas. He crushed two home runs with four RBI and a walk on Friday night. Matt Olson hit his 33rd home run and Ramón Laureano added his 22nd home run while driving in four during the A’s win, their fourth in a row.

George Springer put the Astros ahead with a three-run home run in the top of the eighth inning with his 35th home run. He also moved his on-base streak to 30 games and hit eight home runs with 18 RBI his last 12 games. Jose Altuve added to his career best home run total (28) and homered in back-to-back contests.

For the third time in his career, Nolan Arenado reached 40 home runs. He went 2-for-3 Friday night with two RBI and two walks. He’s only the second player in Colorado history with three 40 home run seasons (Vinny Castilla) and the fourth third baseman in history with at least 75 percent of his games played at third to do so. Arenado leads the majors with 18 home runs since August first. Trevor Story launched two home runs during his 14th multi-home run game of his career. Story’s up to 32 dingers this year.

Another night, another home run for Austin Meadows :

Yoán Moncada went 3-for-5 with a double and a triple driving in four. He’s recorded at least a hit in eight of his last nine with seven multiple hit games in this stretch resulting in a .487 average (19-for-39). Eloy Jiménez hit his 27th home run and José Abreu his 33rd in a win on the road in Seattle.

Due to rain, Jorge Polanco owners lost a home run in last night’s game suspended to rain then eventually postponed. This sets up a doubleheader with the Twins leading the division by three and a half games but forced to use “bullpen” games for each contest today. Cleveland counters with Mike Clevinger in Game 1 but will also deploy its bullpen in the second game.

In a potential Cy Young showdown, Hyun-Jin Ryu will try to right his recent struggles versus the Mets and faces Jacob deGrom .

St. Louis will send Jack Flaherty to the mound in the midst of his ridiculous second half surge (0.76 ERA in 71.1 innings since the break) opposed by Jordan Lyles of the Brewers.