Fantasy Baseball Daily Round Up: July 25 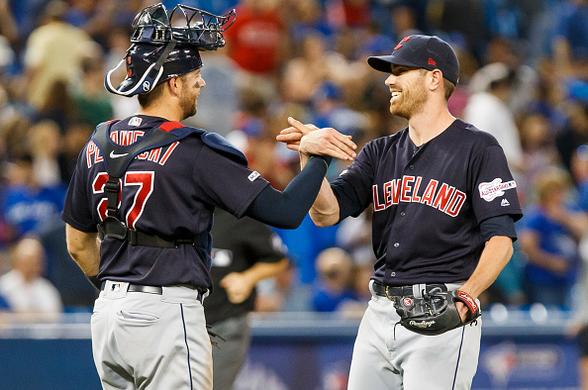 On a day which provided a mixed bag of offensive explosions and pitching gems, Shane Bieber takes center stage firing a one hit shutout issuing one walk and striking out 10 in Toronto. It’s his second complete game shutout this season and he’s the third player in Cleveland team history with 10 or more wins in multiple seasons prior to turning 25. As for last night, Bieber just missed throwing a “Maddux” but matched a different Indians record:

Here’s the other notable starting pitcher performances from Wednesday:

Bullpen Notes: Doolittle saves both ends of a sweep

It’s been an up and down season for Sean Doolittle as the Nationals closer, but he notched his 22nd and 23rd saves of the year on Wednesday. Doolittle allowed a hit in each inning of work with three strikeouts leading to six straight scoreless appearances with two more yesterday. Washington should look to add some depth to the bullpen but Doolittle with health, could rebound over the last two months.

Here’s the rest of the high leverage events from Wednesday:

Leading the way for the hitters, Paul DeJong went 4-for-4 with three home runs driving in five during the Cardinals 14 run explosion. DeJong’s the youngest St. Louis player since Albert Pujols to record a three home run game:

He’s also the first shortstop to do so in team history. Teammate Yairo Muñoz continues to rake playing all over the field going 3-for-5 with two runs, two doubles and stealing two bases. Munoz has hit safely in 15 of his 19 starts this season but flies below the fantasy radar.

Here’s the rest of the hitting highlights from Wednesday:

Tommy Pham recorded a smash and dash with his 16th home run while stealing his 11th base in a Rays win over Boston.

Both Jose Altuve (15) and George Springer (23) homered in an Astros win over the A’s extending their lead to seven and a half games in the process.

Milwaukee rookie Keston Hiura hit his 10th home run in only his 40th game ranking second in team history. Hiura’s also in the midst of a 13-game hit streak during which he’s hitting .453 with 12 runs, eight doubles, two triples, four home runs, 14 RBI and a 1.406 on-base plus slugging percentage.

Ketel Marte hit his 22nd home run driving in two and has reached safely in 37 of his last 40 games. Carson Kelly added his 13th home run. Over his last 16 starts, Kelly’s batting .296 with six doubles, four home runs and 11 RBI along with drawing 10 walks.

Another second half surge for Rougned Odor ? He launched his 15th home run in a loss and tallied seven hits in his last 12 at-bats with four home runs driving in seven moving his average over the Mendoza line.

For Seattle, Daniel Vogelbach notched his third multi-homer game with two in their win. Vogelbach’s up to 25 this year.

Kris Bryant launched his 21sth home run before leaving the game with knee soreness. He’s day-to-day like the rest of us but his owners will track this closely. Javier Báez added his 25th home run going 2-for-5 with an RBI.

Another high scoring game between the Yankees and Twins. Aaron Hicks went 2-for-5 with his 12th home run driving in two. Over his last 19 games, Hicks has accrued six doubles, seven home runs, 16 RBI and scored 16 runs. Gleyber Torres hit his first home run since June 25th, and 20th of the season. Edwin Encarnación added his American League leading 30th dinger and Mike Tauchman stayed hot with two more hits including his first triple of the season.

For the Twins, Eddie Rosario and Nelson Cruz each hit their 22nd home runs. Rosario’s hitting .313 since returning from the injured list with two home runs and seven RBI in nine games. Cruz homered for the third consecutive game and has hit five in his last eight along with nine over his 19 contests.

Kole Calhoun recorded his second straight three hit game along with a home run against the Dodgers. He’s within three of his career high set in 2015.

Tim Anderson owners will be awaiting his return. He started his rehab last night in Charlotte:

Anderson finished 3-for-4 with three singles for @KnightsBaseball tonight. I don't think he will be there more than four or five games, if all feels well in the ankle.

Jacob deGrom will look to stifle the Padres offense on getaway day in New York. Miles Mikolas and Joe Musgrove match-up with both teams hitting the ball well in the series.

Nationals pitcher Max Scherzer returns from the injured list facing the Rockies looking for a series sweep with their ace on the mound. Hop his back responds well to the cortisone shot.

In the evening slate, José Berríos will oppose Lucas Giolito in a potential pitcher’s duel in Chicago.

Be sure to stay with Fantasy Alarm leading up to the trade deadline and across all facets of fantasy to stay ahead of the competition.