Fantasy Baseball Daily Round Up: July 21 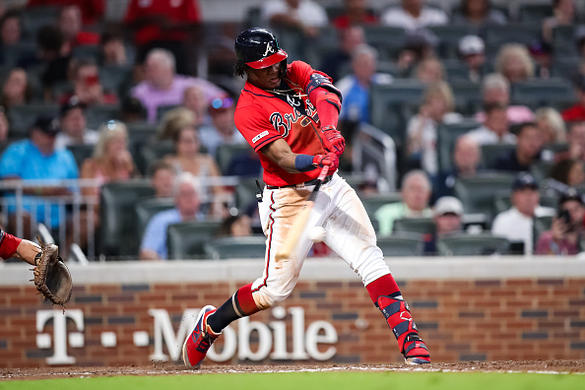 Let the kids play not only represents a Major League Baseball campaign, it also signals the youth movement in the sport. Ronald Acuña Jr. and Vladimir Guerrero Jr. led the way on Saturday proving youth will be served. Acuna Jr. went 2-for-4 with a run and a walk while stealing two bases reaching 21 for the season. He’s stolen a base in five straight games becoming the first player since Tim Raines in 1981 under the age of 22 to do so and:

.@ronaldacunajr24 joins @andruwjones25 as the only @Braves to have a 20 SB, 20 HR season before turning 22. pic.twitter.com/CD8Ni3mm2X

It’s been a rough start transitioning to the majors for Guerrero Jr. but he recorded his second straight multi-hit game on Saturday along with a first in his career:

Guerrero Jr.’s the youngest player (20 years, 126 days) to hit a grand slam since José Reyes in June of 2003 and the youngest in the American League since Tony Conigliaro in 1964 to launch a grand slam. Not saying he will salvage his season in the second half, but a strong finish could be in store the talented rookie.

Here are the rest of the hitting highlights from Saturday:

D.J. LeMahieu extended his hit streak to seven games with three hits in four at-bats. He’s recorded a hit in 11 of his last 12 games with a .355 average within the streak. Edwin Encarnación went 2-for-5 with a double and his third game with at least three RBI since the All-Star break. Over his last eight games since the break, Encarnacion’s batting .300 with two doubles, four home runs and 14 RBI.

In a loss, Nolan Arenado launched his 22nd home run driving in three. It’s also his seventh interleague home run in only 15 such games leading the majors in the category.

Also in a loss, but not to be overlooked in the youth movement, Fernando Tatis Jr. hit this tank shot in Chicago:

Manny Machado added his 25th home run and Hunter Renfroe his 28th in a the Padres loss to the Cubs.

Not only did Javier Báez put the Cubs ahead with a three run opposite field home run, he turned in this web gem:

Javy Báez has ???? in the back of his head! pic.twitter.com/arH1KMYUjs

Remember when the Mets signed free agents to potentially block Jeff McNeil , Dominic Smith and Pete Alonso ? All three homered in a win over the Giants on Saturday. McNeil went 2-for-5 with his ninth home run and leads the majors with a .345 batting average. Smith tallied three hits in five at-bats including his 10th home run driving in four and Alonso a pinch hit three-run home run. His 33rd this year and set the Mets rookie record for RBI with 75 this season, in July.

Still scorching, Ramón Laureano racked up his fifth straight multi-hit game along with hitting a double and his 20th home run in an A’s win in Minnesota. In July, Laureano’s hitting .469 (23-for-49) with 20 runs, seven doubles, seven home runs and 13 RBI in 14 games.

Miguel Sanó moved his on-base streak to 16 games and hit his 14th home run in a Twins loss. In July, Sano’s hitting .318 with 10 runs and a 1.025 on-base plus slugging percentage. Breakout or hot streak? Time will tell.

Just another three-hit game by Christian Yelich and he scored three more runs. Mike Moustakas hit a go-ahead three-run home run off of Andrew Chafin . It’s Moustakas’ 26th home run of the season and he’s on pace for 42 this year.

Mentioned above, Mike Trout crushed his 31st home run driving in three during a four run rally in a win over the Mariners. This also marks Trout becoming the youngest player in the live ball era to hit 40 home runs against one franchise. He’s definitely not sleepless in Seattle.

One of the more hotly debated pitchers in the preseason, Clayton Kershaw did not factor in the decision due to the transgression of his bullpen. He recorded a season high 10 strikeouts against Miami over six shutout innings limiting them to two hits and one walk. Plus:

Only Max Scherzer and Chris Sale have more since Kershaw’s debut in 2008. pic.twitter.com/TVygQ1FQDh

Kershaw’s thrown at least six innings in all 17 of his starts with 14 quality starts within them. At a time when home runs litter the landscape, Kershaw’s 2.84 ERA with a 1.02 WHIP look even more impressive. Kershaw generated 16 swinging strikes and 17 called of his 97 pitches for a strong 34 called plus swinging strike (CSW) percentage last night.

Here are the other notable pitching performances from Saturday:

Representing one of the pioneers of the fluid bullpen, another blown save hurt the Rays on Saturday. Emilio Pagán suffered his sixth blown save of the season serving up a home run to James McCann with a one run lead. Pagan’s been solid this year but also allowed four home runs his last eight appearances converting only two of five save chances in them. Keep tabs on who get the next chance in this bullpen between Diego Castillo and Oliver Drake who confounded everyone with this pitch last night:

Here’s the rest of the high leverage events from Saturday:

Andrew Cashner will face his former team in Camden Yards on Sunday trying to help Boston to a series win on the road.

Two young pitchers will face off in Tampa with Dylan Cease opposing Blake Snell . Plus, two more will make their debut with Adrian Morejon starting for San Diego in Chicago while Conner Munoz will match-up with the Mets in San Francisco.

Perhaps pitching for his spot on the roster, Kevin Gausman returns to the mound for Atlanta tonight against the Nationals who will send Joe Ross to the mound. Will he keep this streak going:

.@Nationals starters have gone 27 straight starts without recording a loss.

Injury updates should emerge regarding Kevin Kiermaier ’s sprained left thumb. Tough timing since he just heated up at the plate.

On the farm, Travis Shaw hit two home runs on Saturday at Triple-A and has hit eight over his last six contests. Also, the wait on this prospect continues:

#Astros No. 2 prospect Kyle Tucker crushed his 25th homer of the season for @RRExpress while No. 12 prospect Brandon Bielak is spinning a gem on the mound:

With the trade deadline looming, be sure to stay with Fantasy Alarm to remain ahead of the competition.