Fantasy Baseball Daily Round Up: July 13 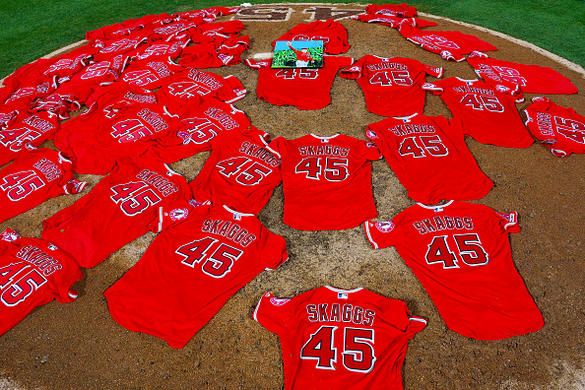 One of the best things about sports, it’s ability to transcend tragedy. It took center stage on Friday night with the Angels still grieving the loss of teammate Tyler Skaggs . Speaking as a parent of an athlete, not sure I’d be able to step up and deliver a first pitch like the one by his Mom Debbie, but it could move anyone to tears:

In their first home game since Tyler Skaggs ' passing, the @Angels pay tribute to their teammate and friend. ? pic.twitter.com/8PniYKPjEn

After a “Calling All Angels” tribute to Skaggs prior to the game, Los Angeles then celebrated their teammate with an unforgettable performance on the field. It started early by team leader, Mike Trout :

Trout finished 3-for-4 with two doubles, his 29th home run and six RBI. Félix Peña entered after opener Taylor Cole fired two clean innings with two strikeouts. Pena did not yield a hit issuing one walk with six strikeouts for his seventh win and a combined no hitter of the Mariners. He also racked up 15 swinging strikes, 10 of his 27 sliders, and 11 called strikes for a robust 32.1 Called plus swinging strike percentage (CSW) of his 81 pitches on the night. There’s no way to tell if there’s a sign or symbolism in the win, but the Angels scored seven runs in the first and 13 in the game on 13 hits. Tyler Skaggs would have turned 28 today, July 13th (7/13). A fitting end to an emotional evening with Skaggs’ teammates leaving their jerseys adorned with his name on the mound:

It’s been a frustrating year to own Yu Darvish or Chris Archer . For at least one day, they took part in a terrific match-up on Friday afternoon in Chicago. Although neither figured in the decision, they combined for 20 strikeouts during their combined 12 innings of work. Darvish turned in six shutout innings giving up two hits and a walk with eight strikeouts. He generated 14 swinging strikes and 12 called for a 27.7 CSW percentage. Archer entered with a 5.40 road ERA and struggled in the sixth leading to three earned runs on three hits and two walks with 10 strikeouts over his six inning outing. Archer recorded 17 swinging strikes and 18 called for a 36.1 CSW percentage leading all starters yesterday. Not sure if either can carry this forward, but a guy can dream.

Here are the other notable starting pitcher performances from last night:

With Milwaukee in the midst of a pennant chase in a hotly contested division, it appears they will ask Josh Hader to pitch through injury. He did not appear in the All-Star game with lingering back issues and struggled on Friday night serving up two more home runs resulting in his second blown save of the year. Home runs continue to plague Hader as he’s matched last year’s number allowed of nine, in 36 fewer innings. San Francisco then turned to its All-Star reliever and hot trade commodity, Will Smith for the save. However, Smith’s steak of 23 straight saves to start the year ended when Christian Yelich tripled to start the ninth inning then scoring on a Mike Moustakas ground out tying the game. All good things must come to an end, but both outings hurt fantasy owners.

Here’s the rest of high leverage events from Friday:

One team potentially primed for a big second half, Boston, received a boost from three hitters on Friday. However, it’s not the ones people would suspect based on last year. Rafael Devers , Xander Bogaerts and Christian Vázquez continue to spark the team with each homering in a win over the Dodgers. Devers launched his 17th home run while scoring two runs and driving in two. Over his last 22 games, Devers owns a .422/.464/.789 slash and a .367 isolated power. He’s scored 24 runs with nine doubles, eight home runs and 22 RBI in them. Bogaerts appeared to reach for a pitch and flicked it out of the park, words do not do it justice:

That sweet hr swing from EVERY angle... ???? pic.twitter.com/EXWGSQd7a6

Currently, Bogaerts pacing towards 121 runs and RBI with 32 home runs. He blasted his 15th of the year in the tweet above. Last, but not least, Vazquez also hit his 15th home run and has homered in five of his last eight contests. Since June 21sth, Vazquez has appeared in 15 games with 14 runs, seven home runs, 17 RBI and a robust .345/.355/.776 slash line.

Other notable hitter performances from a full slate on Friday night:

Starling Marte hit his first home run since June 27th, a three-run shot to tie the game in Chicago. He’s up to 13 home runs and 13 stolen bases through 79 games this year.

Have a night Nate Lowe . He went 4-for-5 with his third home run and three RBI in a rout over the Orioles. Plus:

Rookie Yordan Alvarez turned in the first multi-homer game of his career going 3-for-3 with three runs, two RBI and a walk against the Rangers:

Teammate Yuli Gurriel stayed hot at the dish with his 15th home run of the season moving his hit streak to six games during which he’s hitting .522 over his last 23 at-bats. Gurriel’s also hit eight home runs his last nine games with 17 RBI.

Flying below the radar as usual, Shin-Soo Choo hit his 14th home run and extended his multiple hit streak to four games and personal hit streak to eight in a Rangers win. Choo’s on pace for 25 home runs and 14 steals with a .294 average yet gets overlooked every year. Danny Santana tallied a smash and dash hitting his 10th home run while stealing his 10th base. Elvis Andrus swiped two bases and scored the winning run on Santana’s walk-off single. Joey Gallo hit his 21st home run.

Buster Posey hit a game deciding grand slam in the 10th inning leading the Giants to a win on the road. This represents Posey’s first slam since June 24th, 2015. Evan Longoria hit his sixth homer in six starts so far in July. He ended June with seven home runs. In July, Longoria’s slashing .385/.429/.1.154 with nine runs, six home runs and 12 RBI.

Leading the Rockies to a win at home, David Dahl and Daniel Murphy each homered in the eighth inning. Dahl also recorded a smash and dash stealing his third base as well. Could Murphy be heating up? He tallied three hits including his eighth home run driving in two last night.

Josh Donaldson continues to surge with two home runs in a win over the Padres. Donaldson upped his season total to 20 and this marked his 18th career multi-home run game. He also leads the majors with 12 home runs since June 12th boosted by a .433 isolated power and .289/.375/.722 slash in this sample.

A split doubleheader between the Rays and the Orioles. Since Dylan Bundy lasted an inning on Friday, this could be a long day for the Baltimore bullpen. Rookie Brendan McKay will pitch Game 1 for Tampa Bay with Charlie Morton working the night cap.

An intriguing match-up this afternoon between Jake Odorizzi and Trevor Bauer .

In the evening games, scouts will be watching how Madison Bumgarner fares in Miller Park. His home and road splits should cause some concern for a contender before adding the veteran starter.

San Diego reset its rotation so Chris Paddack will not pitch until they face Miami then the Mets after.

Fantasy owners will be tracking the Max Scherzer news as well. His second half start got pushed back after an MRI of his back with Aníbal Sánchez now pitching on Sunday. It appears Washington’s being cautious, heed the reports going forward.

Be sure to stay with Fantasy Alarm for terrific content across all platforms to remain ahead of the competition.