Fantasy Baseball Daily Round Up: May 11 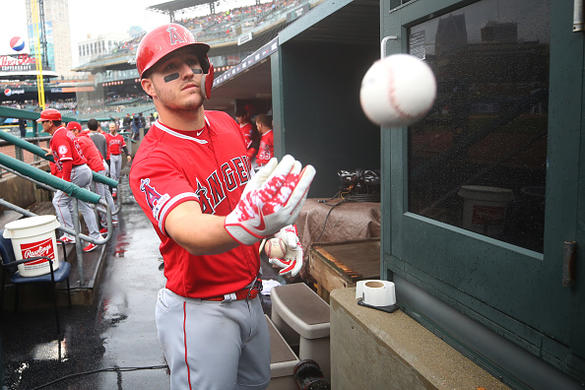 When Mike Trout slumps a bit, it confuses fantasy owners. However, there’s never a doubt about what type of player and person he remains as an ambassador of the game:

After meeting his “superfan”, Trout went 2-for-4 with a double and his eighth home run driving in three. Trout’s two batted ball events resulted in exit velocities of 106.7 and 108.5 MPH marking his first multi-extra base hit game of the season. There’s not much to worry about with Trout in fantasy and nothing seems to get players out of a slump like the Orioles pitching staff.

Boston surged to 14 runs on Friday night. Andrew Benintendi racked up three hits including his fifth home run. He’s started to pull the ball for more power of late homering in his last two games. He’s also scored 14 runs his last 15 games. Over his last 27 contests hitting .321 (36-for-112) with eight doubles, all five of his home runs and 17 RBI. Mitch Moreland launched his 11th home run, in only 35 games so far, and he’s knocked in 14 runs his last nine games. Perhaps following the path of former teammate Joey Gallo , Moreland’s recorded 17 extra-base hits (six doubles, 11 home runs) of his 25 this year while averaging a home run every 10.27 at-bats so far.

Benefiting from extra playing time, Mitch Garver continues to surge hitting his eighth home run, already surpassing his total from last year. He’s also the fourth Twins hitter to accrue at least three walks with his only hit being a home run in a game, last accomplished by Kent Hrbek in 1987. Plus, Garver’s hitting .357 with a 1.191 on-base plus slugging percentage over his last 10 games against the Tigers with a doubleheader on tap.

Adalberto Mondesi swiped two bases moving into a tie for the major league lead with Tim Anderson at 12 this year. Mondesi’s racked up 12 multi-stolen base games in his career with 10 since the start of last season, including a major league leading 39 steals from the second half of last year through last night’s action. Alex Gordon hit two home runs driving in three moving his season total to eight. Gordon hit his eighth home run on August 18th last year. Plus, his exit velocities on the home runs (110.6 and 109.5 MPH) register as two of his three hardest hit events this year. Jorge Soler added his 10th home run, surpassing his 2018 total already, and he’s slashing .423/.484/.846 his last seven games.

Entering Friday’s game in the midst of a .211 slump in his previous 13 games, Matt Chapman could be emerging from it:

Ronald Acuña Jr. moved back into the leadoff spot last night and hit his eighth home run of the year. Dating back to the start of the second half last year, when hitting first, Acuna’s hit 20 home runs in 67 games.

Luis Castillo continues to build on his hot start winning his fourth game while striking out 11 against the Giants. He did issue five walks, less than optimal, but finished with six shutout innings limiting them to two hits. Castillo recorded 24 swinging strikes, tying him for the fourth highest total this year in a start, and 17 called strikes for a robust 39.8 CSW (called plus swinging strikes) percentage. Plus:

Most swings-and-misses on changeups this season:

Accruing less swinging strikes, but remaining effective, Jake Odorizzi won his fifth game allowing one hit with five strikeouts in seven efficient innings. Odorizzi only needed 95 pitches and extended his scoreless streak to 20 innings in the process. He’s won five straight decisions with a matching 0.86 ERA and 0.86 WHIP over his last 31.1 innings.

Here’s the other noteworthy starting pitcher performances from Friday:

With Arodys Vizcaíno out for the year and A.J. Minter optioned to Triple-A, the Braves bullpen will be ripe with opportunity. Luke Jackson rebounded for his third save with a clean ninth and two strikeouts in Arizona. But, do not lose sight of how the team prefers to match-up in high leverage with a possible new southpaw to work in the late innings:

#Braves' Snitker on using Newcomb for multiple innings: “I didn’t want to run him back out there (for 9th) today because I don’t know if he’s ever been back-to-back (games) before. But he definitely could do that for us. I’ve got no problem pitching him in the ninth inning.”

Any owner holding on to Anthony Swarzak for saves, should put him on the bench. Swarzak entered Friday’s game during the fifth inning and allowed the only inherited runner to score. Plus, Swarzak yielded three hits, an earned run and a walk in his 1.1 innings. He’s given up at least a run in seven straight appearances. For those in deep leagues, keep tabs on Parker Markel who recorded all five outs via strikeout for Triple-A Tacoma last night.

Here’s the rest of the high leverage highlights from Friday night:

A doubleheader in Minnesota versus the Tigers. Spencer Turnbull will try to build on his season in Game 1 against Michael Pineda . Game 2 could feature some runs. Stay tuned.

Trevor Bauer will try to rebound in Oakland after getting shelled at home in his last start.

Add Texas to the list of teams deploying the opener. Jesse Chavez will start the game.

Do not forget about Mallex Smith . He hit a go ahead three-run home run last night at Triple-A. He missed most of spring training with an elbow injury. However, in seven games in the minors, Smith’s slashing .406/441/.563 with seven stolen bases.

MLB Burnes not sharp in no-decision against Pirates

MLB Iglesias allows home run but picks up 11th save

J. Cueto - SP
SF
Johnny Cueto will start Sunday's contest against the Nationals.
That was confirmed by Giants manager Gabe Kapler. Cueto hasn't started since Sunday; a game in which he allowed three runs and went just 4 1/3 innings against the Cubs. He's pitched relatively well, however, with a 3.70 ERA, 1.25 WHIP and 40 strikeouts over his 48 2/3 innings.
Added 10:38 pm (EST)
Added 10:38 pm (EST)

J. Rodriguez - SP
WSH
Jefry Rodriguez fired four scoreless innings on Saturday in a no-decision against the Giants in game two of a doubleheader.
While Rodriguez allowed just one hit and struck out two, he also walked three and threw just 32-of-60 pitches for strikes. Command has often been an issue for the 27-year-old, but it's an effective first appearance for the right-hander after having his contract purchased on Saturday. He'll likely be a multi-inning reliever for the Nationals, with the ability to make some spot starts.
Added 10:22 pm (EST)
Added 10:22 pm (EST)

C. Menez - RP
SF
Conner Menez threw two scoreless innings in his start against the Nationals in game two of a doubleheader on Saturday.
Menez has not allowed a run in his time with the Giants over six appearances and 12 innings of work. He allowed one hit, one walk and picked up a strikeout while throwing 26-of-43 pitches for strikes. Menez is helping the San Francisco pitching staff, but can't help fantasy managers in this type of role.
Added 10:22 pm (EST)
Added 10:22 pm (EST)

C. Baragar - RP
SF
Caleb Baragar picked up a save in the second game of a doubleheader against the Nationals on Saturday.
Baragar picks up his first save of the season a day after he was activated off the injured list. He's done a very nice job in his 18 1/3 innings with the Giants over  23 games, as he's lowered his ERA to 0.48 in those contests. The ERA is nice, but Baragar isn't going to get enough save chances nor miss enough bats to be a fantasy recommendation in most leagues.
Added 10:22 pm (EST)
Added 10:22 pm (EST)

J. Soto - RF
WSH1
Juan Soto went 0-for-3 with a strikeout in a loss during game two of doubleheader on Saturday against the Giants.
Soto also went hitless in the first game, although he did draw a pair of walks in that contest. The 22-year-old star is now hitting just .267 in his 52 games, and his slugging percentage dips to .442. The .404 on-base percentage is nice, but it's fair to say that Soto has not lived up to (very) lofty expectations in 2021.
Added 10:22 pm (EST)
Added 10:22 pm (EST)

A. Frazier - 2B
PIT1
Adam Frazier went 3-for-5 with a double, stolen base, and a run scored during the Pirates' loss to the Brewers.
Frazier is having a fantastic season, batting .333/.393/.474 with two home runs, 23 doubles, 36 runs scored, and four stolen bases. It is very likely that he will be taking his talents to another city this summer, as the Pirates are a near-lock to trade the 29-year-old. Frazier may not hit the ball hard, but he boasts one of the lowest strikeout rates in the league and a 92.1 percent in-zone contact rate.
Added 10:01 pm (EST)
Added 10:01 pm (EST)

C. Yelich - LF
MIL1
Christian Yelich went 2-for-3 with a double, two runs scored, and three RBI during the Brewers' victory over the Pirates.
Yelich smashed a three-run double in the bottom of the fourth inning to put the Brewers on top 5-4 in what proved to be the game-winning hit. The 29-year-old is batting just .248 on the season but carries an impressive .406 on-base percentage.
Added 9:56 pm (EST)
Added 9:56 pm (EST)