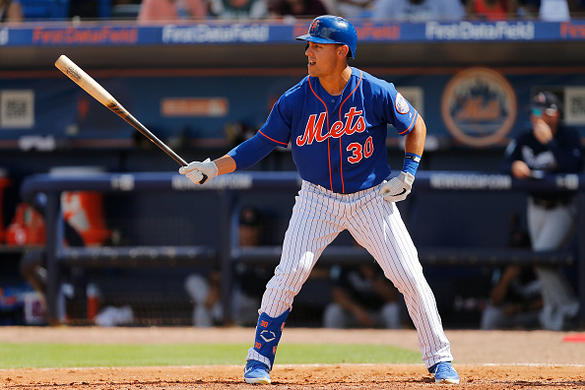 Entering 2018 after surgery to repair a torn posterior capsule in his left shoulder, Michael Conforto owners figured he would start slowly, especially in regards to his power production. But, it carried over with Conforto cratering to a .216 average with 11 home runs in the first half for the Mets. Recency bias could make Conforto a terrific target in the year ahead possessing an average draft position above 100 in all 15-team leagues according to NFBC data.

What this does not account for, Conforto finished tied for seventh in home runs (17) and fourth in RBI (52) after the All-Star break last year. Knowing shoulder injuries can linger and make it difficult for players to regain old form, Conforto surged in the second half. From August to the end of the season, Conforto launched 14 home runs with 43 RBI and he finished September with nine home runs along with 18 extra-base hits. Over his last 22 games, Conforto hit .313 (27-for-86) with eight doubles, a triple, seven home runs and 24 RBI while scoring 14 runs.

He set career bests in doubles, home runs and RBI. Many feel Conforto could platoon in the year ahead, but he recorded 33 hits and a .287 average versus southpaws after June 16th. Conforto also launched 10 home runs against left-handed pitchers. Perhaps these facts get overlooked when trying to value him for the upcoming campaign.

Here’s a look at Conforto’s spray chart from the second half courtesy of Baseball Savant: 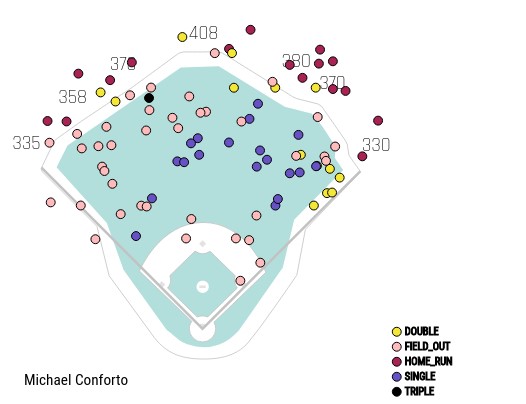 It’s also encouraging to see Conforto can hit the ball for power to the opposite field in order to beat the shift. He’s not been a pull heavy hitter, but did so more in the second half last year. Here’s a look at his spray chart which should assuage any worries for too much regression moving forward: 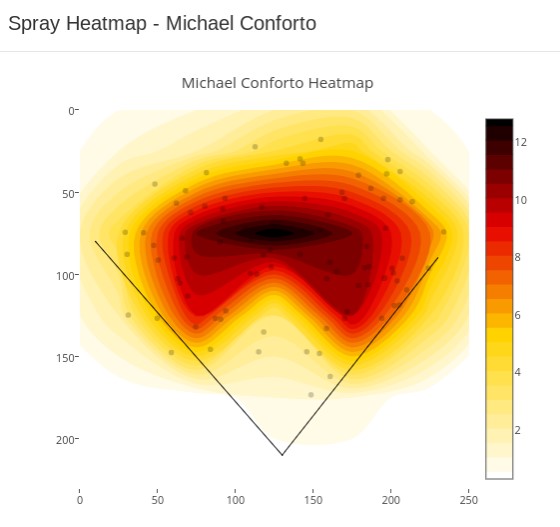 But, note how he performed in each half of the 2017 season along with last year to identify which half should be the outlier:

It’s apparent the shoulder surgery hampered Conforto’s first half last year. His only isolated power below .250, hard hit rate under 38-percent and his only average below .270 in any half within this sample. Conforto enters his Age-26 season healthy and in the midst of his power peak. This, along with his depressed cost, could result in a perfect storm for Conforto.

His expected batting average the last two years of .254 does not jump off the page, however, it’s weighed down by his slow start in 2018. Using this as a baseline, it still resides above his projections. Add in more than 51 expected home runs in this time frame while playing half of his games in a pitcher friendly park point to a breakout. Here’s Conforto’s fly ball percentage, home run per fly ball and hard-hit rates in a 20-game rolling chart from the last two seasons: 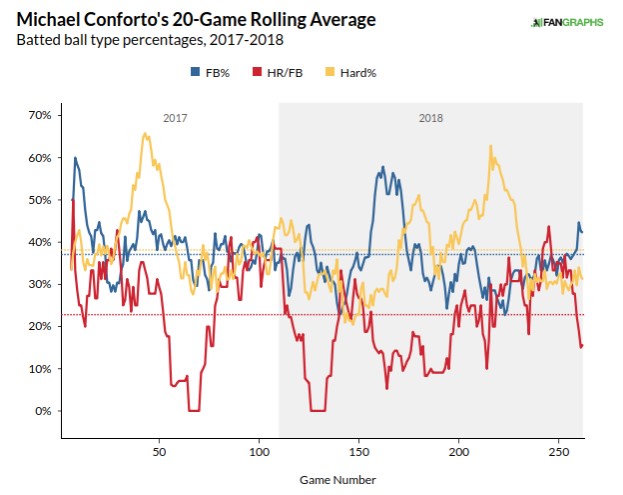 Note the convergence of all three during his torrid September. At full strength, Conforto could not only hit more than 30 home runs, if everything breaks right for him, he might make a run at 40 home runs. Again, this represents the high tide of his projection sets, but his 47-percent pull rate in the second half of 2018 merged with his hard hit rebound along with maintaining a 26.2 home run per fly ball percentage in the second half.

In order to illustrate his projections, here’s four different samples to peruse:

Knowing Conforto’s ability to get on base while hitting for power, taking the over on his average with a range of .260-to-.275 within his reach. Leaning towards a .269-ish final average, but Conforto will hit 33 or more home runs, book it. His counting statistics will reflect where Conforto hits in the lineup. Presently slated to hit fifth, he could score 85-plus runs with 90 or more RBI. A stable skill set with a chance for growth makes Michael Conforto a terrific target at his present price point.

Focus on his second half along with strong splits in 2017 to evaluated Conforto. A better lineup, a healthy shoulder and his power prime should translate to another set of career bests, at a discount.