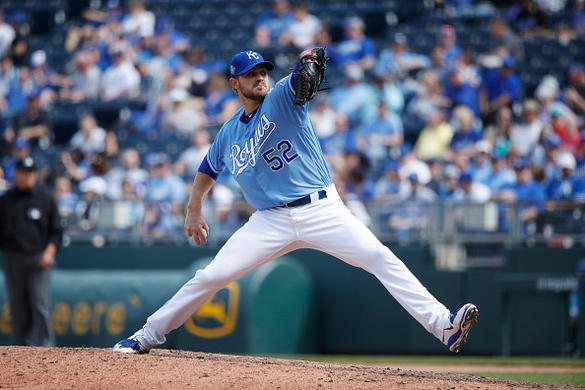 As frustrated as Danny Duffy can be after watching the bullpen implode during Game 2 of Tuesday’s doubleheader, Justin Grimm outdid himself on Wednesday. It’s not all his fault, pretty positive he did not ask into a game with a decided deficit. On Tuesday, Grimm walked all three hitters he faced in relief following Duffy’s six shutout innings. All three runners scored resulting in a Blue Jays lead and taking the chance of a win away from Duffy in the process.

Getting work on Wednesday, Grimm only recorded one out. However, Toronto racked up four hits and two walks resulting in six runs including a grand slam. There’s many holes in the Royals roster, but these back-to-back outings could lead to the Grimm reaper, or at least a designated for assignment to allow the team to add a fresh reliever and perhaps take a look at a pitcher with upside in the future. Keep tabs on Nate Karns when he lands in the bullpen. One good sign for Royals? Whit Merrifield ’s walking more, chasing pitches less often and homered on Wednesday.

Not looking to return to Triple-A, Teoscar Hernandez tallied four hits in six at-bats with a triple, home run and four RBI. It will be interesting to see how Toronto handles the roster when Kendrys Morales returns, but those who speculated on the power and speed combination of Hernandez, hope he remains in the majors. Myself included.

The Grandy-man can. Curtis Granderson seemed on his way to a disappointing DFS finish but totally redeemed himself with a grand slam off of the aforementioned Grimm during the eighth inning. Granderson’s hitting .318 with a .957 on-base plus slugging percentage this year.

Hopefully Sean Rodríguez made people’s daily rosters with the Pirates facing a southpaw. Rodriguez will not only see more playing time going forward due to Josh Harrison ’s injury, but he launched his second home run of the year. Lest we forget, Rodriguez hit 18 home runs in only 342 plate appearances in 2016.

Ring the Josh Bell . He finished 2-for-5 with three RBI on Wednesday. He’s hitting more fly balls, improving his launch angle and if Bell figures it out, 30 home runs could be in the offing sooner rather than later.

Hit a home run, it’s your birthday. Miguel Cabrera celebrated by hitting a home run for the third time on his birthday and improved to 21-for-53 (.396) on his special day.

Matt Boyd became the first Tigers southpaw to throw at least six innings and yield one run or less in each of his first three starts of the season since 1908, perhaps Howard Bender recalls this.

It’s April and the Brewers faced the Reds, so, you guessed it, Eric Thames hit a home run. His seventh of the season and 18th in the past two Aprils. Someday Cincinnati will just walk him in a big spot.

Tigers closer Shane Greene blew his first save of the year. His punishment? A win courtesy of Dixon Machado ’s walk-off home run. In case you’ve missed it, Machado’s hitting the ball well but usually resulting in doubles, if he starts hitting more dingers, 12-team mixed league owners will be more interested.

Bounce back start by Jacob Faria who worked six innings giving up five hits, one earned run and one walk with six strikeouts. Of course, it was Texas.

Not so surprising, Álex Colomé allowed a run for the fifth time in eight appearances this year en route to his fourth save. He also yielded a hit and two walks with a strikeout to keep his ERA at nine for the season. Yikes.

Mallex Smith seems set to cash in his guaranteed playing time with Kevin Kiermaier out. He swiped his third base on Wednesday.

One cannot contain Shin-Soo Choo , you can only hope to contain him. Choo hit his fifth home run and seems to be emerging from his slump. Choo also scored four runs on Tuesday night. Such an overlooked fantasy player.

For the second straight day, Yoan Moncada ’s hit a home run and stolen a base in Oakland. Moncada crushed a grand slam and increased his stolen base total to three. If he could only cut his strikeout percentage below 30 percent. One can dream.

Oakland’s Jed Lowrie notched his ninth multi-hit game on Wednesday, leads the majors in hits and has 14 RBI over his last seven games. Still no one seems to want him on draft day.

Scott Piscotty’s in the midst of a eight game hit streak and he’s 13 for his last 30 (.433) and settling into his new home. Teammate Khris Davis is also hot with 13 hits over his last 36 at-bats with four home runs, 10 RBI and seven runs scored the last eight games.

Jacob Barnes locked down his second save of the year working two innings and striking out three while only yielding one walk. It looks like Hader’s closer 1A and Barnes 1B?

Minnesota placed Byron Buxton on the 15-day disabled list due to migraines. He can be activated on the 25th of April when they face they Yankees.

Carlos González hurt his hamstring on a terrific catch, he’s considered day-to-day. If he misses time, it could mean Raimel Tapia rejoins the Rockies.

Seattle will activate Ben Gamel on Wednesday sending Ariel Miranda back to Triple-A.

Atlanta placed Anibal Sánchez on the disabled list and will call up Johan Camargo . This on the heels of signing José Bautista to a minor league contract. See what I did there?

Under the wash, rinse, repeat department, Rich Hill landed on the disabled list with a cracked nail on his middle finger. He may only miss one turn in the rotation. Welcome to the revolving door attached to the 10-day disabled list.

Giants Jeff Samardzija may start on Friday and team would push back Derek Holland , nothing official. Also, Mike Zunino of the Mariners could also rejoin his team on Friday.

Last, if you own Taijuan Walker , it’s being reported he’s been recommended for Tommy John surgery to repair his UCL ligament in the elbow.

St. Louis promoted prodigious power prospect, Tyler O’Neill. He could hit 30 bombs in a season, he could also see a precious few at-bats before returning to Triple-A. Time will tell.

Yankees reporters pressed the team about Gleyber Torres. General manager Brian Cashman mused Torres could force the Yankees hand like Robinson Canó in the past, here’s hoping so.

Cincinnati does not seem to be in a rush to promote Nick Senzel. Here’s the combined production of Cliff Pennington , Phil Gosselin and Tony Blandino since Eugenio Suárez landed on the disabled list: 51 plate appearances, three singles, three walks and a .058/.117/.058 slash line. Puke emoji.

Will the A’s and White Sox game ever end? What type of start will Robbie Ray turn in at home in the Humidor? Can Rick Porcello stay hot or will he regress in Boston? Will Mookie Betts stop hitting? Bounce back by Kenta Maeda in San Diego? All of this and much more to be covered by Fantasy Alarm in the morning Round Up. Be sure to stop back.