The Mets are messing around with their starting rotation while the Cubs can’t decide on the 9th inning. Ray also talks Bryant, JDM, Rizzo, Hammel and a Viciedo signing. 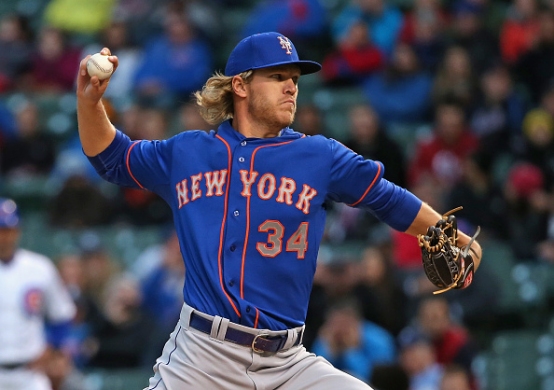 What the hell are the Mets doing with their starting pitchers? That seems to be an open question for the moment. Wait, we have an answer. They will go with a “6-man light” rotation. Huh?

Dillon Gee is the 6th starter at the moment. It sounds like he will be spot started, basically to keep the innings in check for Noah Syndergaard (less than 135 IP last season) and Matt Harvey (no innings last season). Gee will start Sunday for the club with Syndergaard being moved to the start Monday. "This was always a six-man light, five-man heavy -- however you want to describe it," GM Sandy Alderson said Thursday. "This was never about pitching guys every sixth [game] regardless of an off day or what have you. You can look at all of my comments leading up to it, which are perfectly consistent with that. From my standpoint, the overall approach to the pitching really hasn't changed.”

Well that totally clears it up.

If you own a Mets starter make sure you’re keeping close tabs on any announcement they make – especially if you set your lineup just once a week.

The Cubs do not have a closer. Just ask their manager. Here is his response when he was asked if it would be alright with him if there were multiple guys taking turns in the 9th inning. “Always have been.” Ugh. By the way, did you see the reports that Rafael Soriano won’t be active until after the All-Star break. Why the hell is it going to take Soriano more than a month to be ready to throw 20 pitches? Hector Rondon is still the best choice at the moment. He’s worked 7-straight outings without allowing a run.

People keep beating Ray Flowers. It’s easy. Ask around. But he’s back for the challenge yet against Friday thanks to Fantasy Alarm and Draft Kings in the $1,000 Ray Flowers Challenge.

homers. His current fly ball rate is 35.5 percent and the HR/F ratio is lowish for him at 12.3 percent.

Shane Greene was demoted to Triple-A. The dream is dead. I wrote about it in this Daily Trends piece. Kyle Ryan will start in his place Tuesday against the Reds. Ryan is a 23 year old lefty who has thrown 13 big league innings this season. His stuff isn’t great but he is a bit funky which can be an advantage. No need to pay attention in mixed leagues though.

Jason Hammel has a 2.03 ERA since April 27th, the 4th best mark in baseball. Like the skills but I worry about the second half. He’s never thrown 180-innings in a season.

J.D. Martinez update. He’s not the hitter this year that he was last year. Duh (his Player Profile warned). After posting a .912 OPS last year he’s at .762 this season. Know what his career mark is? Try .761. Still powering the ball effectively, though a .444 OPS and 23 homers certainly won’t be enough for the folks that bought all in after last year’s success.

Mark Melancon has helped the Pirates to a 31-1 record when they lead after the 7th inning. MM is 19-for-20 converting save chances. Velocity is down, and the 4.71 K/9 is scary, but dude is getting it done.

Dayan Viciedo was signed by, and yes he’s been a free agent since the end of March, the Athletics who seemingly sign every player they can at all times. Coco Crisp cannot stay healthy, and Josh Reddick has failed to appear in 115 games each of the last two seasons. Dayan has huge holes in his swing, but he’s always hit lefties well with a .291 average, .507 SLG with 21 homers in 454 at-bats.