Ray talks pitching starting with the Cubs bullpen before moving on to break down which pitchers are over and underperforming. 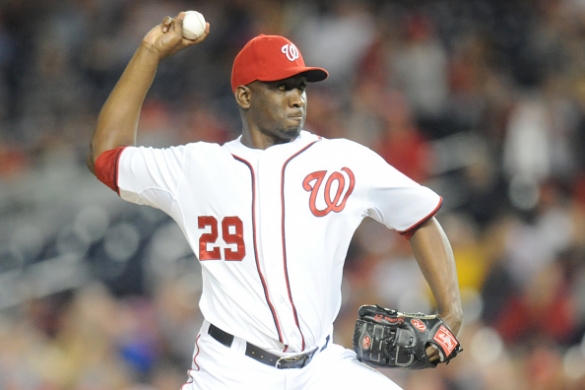 DFS PLAYBOOK PRO – An exciting new offering from the Alarm is here! It’s the DFS Playbook Pro. I will be doing a daily breakdown of the hitters –Hitting Coach – while Howard Bender looks into the Pitchers (Pitching Coach). You can find the link to the Hitting and Pitching articles under the DFS Playbook pro tab at the top right of the screen.

OTHER LINKS TO BOOKMARK

CUBS BULLPEN UP IN THE AIR

Rafael Soriano has 117 saves the past three seasons. It also took him more than two months into the season to find a job. Soriano signed a deal with the Cubs further muddling a messy 9th inning situation (he has a $4.1 million salary that will be prorated and he can earn another $4 million in incentives). Here are the participants (note that all three guys, other than Soriano, had a save in the four game series with the Cardinals over the weekend).

Soriano has recorded at least 32 saves each of the last three seasons. The skills are slipping a bit though with the 35 year old. Soriano is no longer a K per inning kind of guy. Is velocity has gone down each of the past five seasons. His GB/FB ratio last season was awful at 0.64 as his fly ball rate exploded. Can’t be allowing a 49 percent fly ball rate and have long-term success in Wrigley.

Pedro Strop has a big arm as he’s averaged better than 10 strikeouts per nine the past two seasons. Alas, he’s also walked nearly four batters per nine the last two seasons. Always hard to trust a guy in the 9th who has a walk rate that high. He’s been on his game this season though with a 0.92 WHIP and 56 percent ground ball rate through 29 outings.

I can’t see Motte closing. Strop has control issues but a huge arm. Rondon really isn’t pitching as badly as reports in some circles seem to suggest. I would assume that this continues to be a mess moving forward. Soriano will likely get a shot in the 9th when he proves ready to rock, but don’t go all in on the waiver-wire since it’s still messy in Chicago.

LEFT ON BASE PERCENTAGE

Zack Greinke leads the way right now at 86.2 percent in the left on base percentage column. The AL leader is Hector Santiago at 85.8 percent. The league leader last year was Doug Fister at 83.1 percent and only eight guys finished the year over 80 percent. The only man in baseball to be at 80 percent the last two years is Clayton Kershaw. Expect guys like Greinke and Santiago to see a pull back and for their ERAs to rise.

How is James Shields allowing 1.79 homers per nine innings? Amazingly, that’s only the third worst mark in baseball behind Kyle Kendrick (1.85) and Kyle

As for Teheran… that 4.87 ERA and 1.45 WHIP are awful. What’s going on? The K/9 rate is 7.11 right now. That’s half a batter below his career rate. His walk rate of 3.42 per nine… that’s more than an entire batter above his career mark. Even worse, the mark was 2.11 the last three seasons. Dude just isn’t locating his pitches. When he throws his two seam fastball this year batters are blasting at a .383 clip, more than .060 points above his career mark. His change has been hammered too with a .333 mark, .115 points above his career rate. I still believe in the guy and think buying low is a good move, but he’s a total mess right now.

Mike Fiers is saddled with a .379 BABIP, the worst in baseball, just slightly ahead of Gio Gonzalez at .372. Fiers owns a career mark of .307 so some regression is a comin. Gotta think his hard hit ball rate comes down too. This season the mark is 41 percent compared to his career 32 percent mark. His cutter is getting hammered this year to the tune of a .375 batting average, nearly .070 points above his career mark (.308). That’s gotta even out too… one would think.

A pitching measure that is more accurate at depicting the performance of a pitcher than ERA. FIP only takes into account the events that are directly in the control of the pitcher (K, BB, HR, HBP). In effect, FIP builds off the work of Voros McCracken in DIPS ERA by trying to allow the FIP number to be representative of the events that are directly in a pitcher's control versus those that he cannot such as (a) how effective are his fielders? (b) where are those players being positioned by coaches etc.

So, let’s look at the guys who have been the “luckiest” to this point (their skills suggest their ERA should be a lot higher than it actually is).

Santiago has been very fortunate (see his LOB% above).

Gibson is striking out 5.09 per nine.

Miller isn’t going to post a 2.28 ERA this season. We all know that.

Now the “unlucky” guys who have pitched better than it appears at first glance.

Gio is rounding into form, or at least he will when that .372 BABIP comes down.