Drew Phelps explores every Fairway, reads every Green and uses his DFS Golf experience to put together a winning DFS Playbook for the Wyndham Championship. 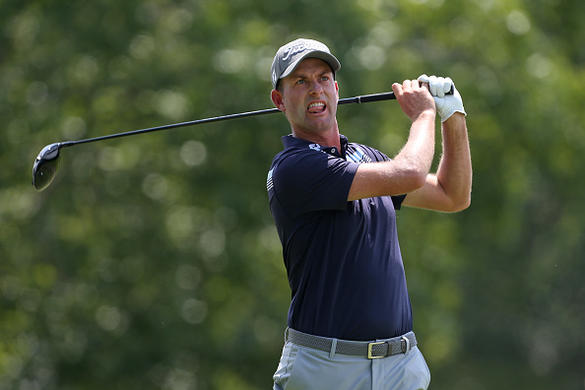 This field is pretty darn bad with a few exceptions but that's because this is the last event to qualify for the FedEx Playoffs.  The majority of this field will be fighting for their right to participate in the playoffs for that $10 million dollar grand prize. I have put players in my playbook with that extra motivation, I mean why wouldn’t you want a guy on the ropes fighting for his life.

The Wyndham Championship is held at Sedgefield Country Club and stretches out only 7,127 yards and plays as a Par 70.  The yardage is deceiving on this course because there are a lot of uphill and downhill holes. You really don’t have to be accurate off the tee on this track because of the length.  9 of the 18 holes will probably only require the players to hit a wedge into the greens which is an obviously advantage whether you're hitting from the fairway or the rough. Players will have to hit these small greens in regulation (GIR) but 73 percent have hit them since 2008 which is just off the charts for a PGA Tour golf course.  We want to target short iron GIR from on and off the fairway, we also want to look at proximity with short irons as well. That’s because these greens ungulate and that means you want as many short putts as possible over the course of your round at Sedgefield.

The playbooks will slowly shrink as we move into the playoffs over the next few weeks. The Tour Championship will just be optimal lineups that week because of the small field that will participate. 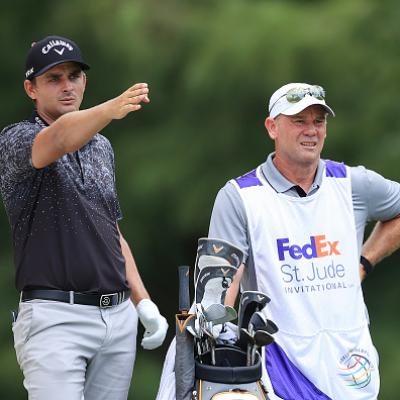 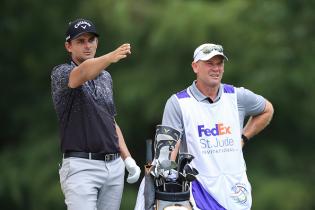 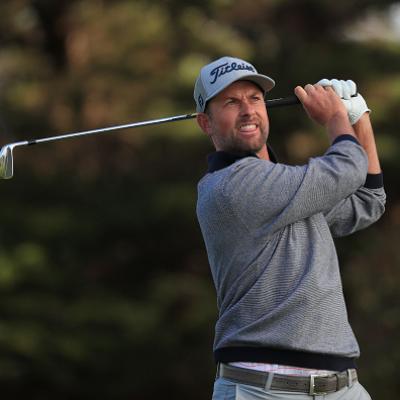 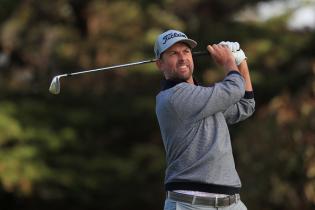 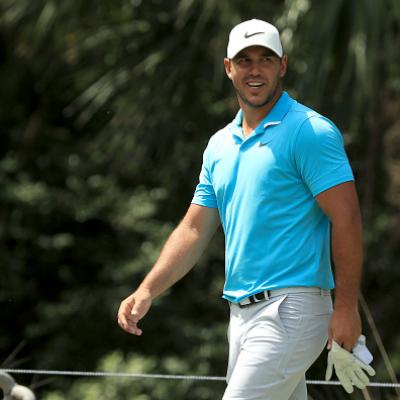 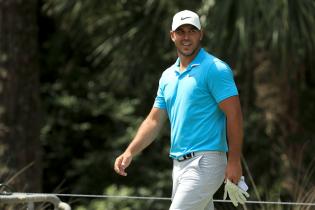 PGA Si Woo Kim finding form ahead of the Wyndham

PGA Branden Grace back on the tee at Sedgefield CC

S. Garcia - G
Sergio Garcia finds himself on the outside looking in as he heads into the Wyndham Championship ranked just 134th in the FedExCup race.
The Spaniard has not been shy in skipping some Playoff events in previous seasons but this year he still has work to do, just to make the Playoffs. He needs to jump inside the Top 125 by week's end. The problem has been lack of quantity not quality of starts this season. Garcia played three events during the Asian Swing last fall but then stayed overseas to peg it in five straight non-PGA TOUR events. That's the primary reason he now finds himself in need of a good week just to qualify for next week's NORTHERN TRUST. How has Garcia fared when he has pegged it Stateside? He is 4-for-6 since the restart with all four of them doubling as top 35s. The highlight was a T5 at the RBC Heritage. Garcia gained 9.9 strokes on approach that week. Overall, he's gained 36.5 strokes tee-to-green over his last 20 rounds, making him a strong target for DFS gamers this week. Garcia is also a past champion at this week's course, Sedgefield Country Club, winning the 2012 Wyndham Championship.
Added Yesterday 9:55 pm (EST)
Added Yesterday 9:55 pm (EST)

S. Kim - G
Past champ Si Woo Kim has collected paychecks in seven straight starts and looks to keep the ball rolling this week at the Wyndham Championship.
Kim has boom-or-bust results at Sedgefield Country Club. He missed the cut in 2013 and 2018 but won the 2016 edition and finished solo fifth last year. These all-or-nothing weeks are very familiar for Kim supporters as he is just 89-for-153 over the course of his career with eight of those being mid-tourney WDs. He also rewards gamers with top-heavy finishes, landing six podium finishes over the course of his career. So, what has clicked lately that has led to seven straight cuts made? He's gained 2 or more strokes on approach in four of his last six measured starts and 3 or more strokes putting in two of them. Gamers should continue to ride the hot hand until it cools off, especially this week on a course where he has a pair of top-5 finishes. The 25-year-old sits at 121st in the FedExCup race so he could use at least one more good week to guarantee a spot in the Playoffs.
Added Yesterday 8:46 pm (EST)
Added Yesterday 8:46 pm (EST)

T. Woods - G
Augusta National made it official today with a public statement that declared no patrons will be allowed on-site during the 2020 playing of the Masters Tournament, set to take place on November 12th through 15th.
The chairman Fred Ridley issued the statement that included, "As we have considered the issues facing us, the health and safety of everyone associated with the Masters always has been our first and most important priority. Throughout this process, we have consulted with health officials and a variety of subject matter experts. Ultimately, we determined that the potential risks of welcoming patrons and guests to our grounds in November are simply too significant to overcome." There was hope by some patrons that a flip to the new season would help change the tune of allowing fans but that's not the case. At the same time, this doesn't guarantee that the PGA TOUR will make the same decision when assessing the fall schedule. All ticket holders will be able to redeem their spot at the 2021 Masters.
Added Yesterday 4:24 pm (EST)
Added Yesterday 4:24 pm (EST)

P. Reed - G
Patrick Reed ousted Jordan Spieth in a playoff during the 2013 Wyndham Championship to secure his first win on the PGA TOUR and he returns this week with seven more TOUR trophies on his mantle.
The Texan has never lacked confidence but it can't hurt his confidence to tee it up this week at a place with so many good memories. Since his victory here, he's returned to play three more times and finished top 25 in each return visit. "It brings back a lot of memories, a lot of positive memories, a lot of great things. It's just a special place, especially driving in and going around that first tee and just remembering what those feelings were like and what those jitters were like stepping up on Sunday having a chance to win a golf tournament." The World No. 9 golfer will have a chance to climb more leaderboards this week as he arrives at 6th in the Wyndham Rewards with a chance to move as high as No. 3 with a victory. Where does his form sit? Since the restart he is not posting as many top-heavy finishes as early in the season but he is 6-for-8 with a pair of top 10s. He's also fresh off a T13 at the PGA Championship so there are plenty of reasons for gamers to click his name this week.
Added Yesterday 4:03 pm (EST)
Added Yesterday 4:03 pm (EST)

B. Snedeker - G
Brandt Snedeker has won the Wyndham Championship twice, each at a different venue, as he readies for Sedgefield Country Club this week in Greensboro, North Carolina.
Snedeker became a PGA TOUR winner back in 2007 when he won the Wyndham Championship at Forest Oaks Country Club. The event moved to Sedgefield the following year but Snedeker didn't skip a beat. He's competed in 11 editions at Sedgefield and arrives with a 9-for-11 record that includes a victory (2018) and four other top 10s. "Every time I come to Greensboro I feel like it's kind of my second home. I feel like this place has kind of adopted me as one of its own." When asked about why the course sets up well for him he responded with, "I think it's a wedge and putting contest kind of this week. You have to put the ball in the fairway off the tee, which I've been doing a really good job of lately, and it turns into a wedge and putting contest, which historically are my strengths." Snedeker hasn't posted anything better than T41 since the restart but this week provides a great chance for him to get back on track right before the Playoffs which kick off next week.
Added Yesterday 3:12 pm (EST)
Added Yesterday 3:12 pm (EST)

G. Murray - G
Grayson Murray has been out of action since a pre-tournament WD from the 3M Open but he's returning to the course this week at the Wyndham Championship.
Murray got a positive COVID-19 test result before hopping on a plane to the Twin Cities. It's been over three weeks since then so he's cleared for a return this week at Sedgefield Country Club. The Raleigh resident should feel comfortable in his home state this week but it hasn't played out that way in two previous Wyndham starts (missed cuts in 2017 and 2018). Likely a big part of that is Murray ranking 4th in driving distance but just 185th in driving accuracy. That falls in line with his career baselines, but Sedgefield CC usually favors precision over power so Murray will be a high-risk option for gamers this week.
Added Yesterday 3:00 pm (EST)
Added Yesterday 3:00 pm (EST)

B. Grace - G
Branden Grace was forced to withdraw mid-tournament in his last event played, the Barracuda Championship (positive COVID-19 test) but he's returning to action at this week's Wyndham Championship.
The South African was inside the top 5 on the live leaderboard in Tahoe when he was forced to back out of the Barracuda following a positive COVID-19 test. He was leaking oil prior to that event with four straight missed cuts before the forced WD. There were signs of form returning, though, as he gained 4.5 strokes on approach at the Memorial and 3.6 strokes on approach at the 3M Open. That's a useful skill to have dialed in on a second-shot course like Sedgefield Country Club. Grace has made two previous trips to the Wyndham and posted finishes of T47 (2015) and T48 (2019).
Added Yesterday 2:54 pm (EST)
Added Yesterday 2:54 pm (EST)

A. Lahiri - G
Anirban Lahiri has been resting back home in India but is ready to return to competitive action this week at the Wyndham Championship.
Lahiri has been staying active by posting cooking videos on his social media accounts but is ready to tee it up again. The 33-year-old will be making his first appearance since a missed cut at the Arnold Palmer Invitational in early March. Lahiri ranks 219th in the FedExCup race so his probability of cracking the Playoffs is incredibly low. Luckily, he'll be able to maintain his same tour status next season. He doesn't have a single top-40 finish this season, in 12 starts, so gamers can probably look elsewhere this week when filling out their rosters.
Added Aug 11 8:57 pm (EST)
Added Aug 11 8:57 pm (EST)